So as long as you can sing and dance, and look pretty, it’s okay to punch people in the face?

I know that the issue of Chris Brown being invited back to the Grammy Awards last Sunday, and being awarded no less, has been an issue that is much talked about on the internet.  But I feel that it should still be addressed here, because it is about violence against women, which is a very serious issue that should be addressed more broadly by society.  Violence against women is often ignored, because for some reason it’s a taboo subject.  And I think part of the reasons why this incident with Chris Brown happened is because violence against women is not given its due weight and attention in society.

When I watched the Grammy’s on Sunday (I was watching for Adele, because I heart that woman!), I muted the TV when I saw Chris Brown, especially when he went onstage to accept the award for Best R&B album.  I was pissed that he gets to go to the Grammy, after what he had done to Rihanna about three years ago.  He did not deserve to be celebrated like this.  It has only been three years since Grammy has blacklisted him, and apparently Grammy has decided that three years is sufficient time for everyone to move on from it. Seriously?

And actually, when the Grammy was asked about inviting back Chris Brown, their response was:

“I think people deserve a second chance, you know. If you’ll note, he has not been on the Grammys for the past few years, and it may have taken us a while to kind of get over the fact that we were the victim of what happened” (The Washington Post)

Anyway, there is a lot more that can be said about the Grammy inviting back Chris Brown.  The power play and the reasons behind these decisions, such as perhaps they invited both Chris Brown and Rihanna to the Grammy to boost TV ratings, are disgusting.  And the Award show that night was paying tribute to Whitney Houston.

What I really want to talk about (I know, I’m taking a long time to get to the point) is the people’s reaction to the whole incident, which is more astonishing and frightening.  During the award show, there were women on Twitter tweeting comments like: 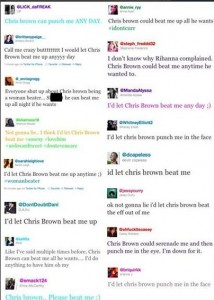 Now, I am not saying that comments like these are the only ones that showed up on the internet about Chris Brown at the Grammy.  There were many, many people, thankfully, that were criticizing the Grammy and Chris Brown. But the fact that so many people actually said they are quite fine with being punched by Chris Brown, because of who he is, is well…horrifying.

This speaks volumes about the fact that people don’t seem to understand or care about what it is like to be physically abused, or how serious an issue domestic violence actually is.  I can only think that tweets like these exist because:

All of these reasons, plus many other reasons, can result in hurtful and insensitive actions from people like these tweets.  This ignorance is alarming and it is damaging, because as long as people ignore, choose not to care, be indifferent or pretend not to see the problems that are very much in their faces, issues of violence against men or women will continue to worsen.  This should not have to be a hush topic.  And I really don’t want to use this cliché, but ignorance is not bliss.

And last but not least, because we “haters” seem to complain and criticize him too much, so a few days after the Grammy, Chris Brown posts on his twitter: 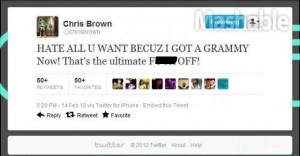 Has he really changed all that much? Does he actually deserve a second chance, with responds like this? Of course, he deleted the tweet a few hours later.  But the damage is done.  Just like the fact that when people think it is okay to be punched in the face, when said puncher is a celebrity or their idol, the damage is done.

If you want to voice your support, here are a couple of petition sites: