The Socio, Cultural and Psychological Effects of the Telephone 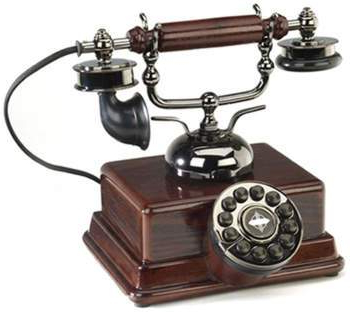 In an increasingly globally connected world one could argue that no other technological advancement had had such an effect on the ‘shrinking world’, at its inception, as the creation of the telephone.  The ability to cast one’s voice across great distances transformed the the way in which people communicate with one another.  Indeed, the word ‘telephone‘ itself is derived from the Greek words ‘tele‘ for far and ‘phone‘ for sound or voice (Wikipedia, 2011a).  Who exactly invented the telephone in the 1870s was once a hotly contested debate, but it is generally accepted today that Alexander Graham Bell is responsible for its creation, and it was he who was first awarded a patent for it in 1876 (Carlson & Gorman, 1990).  Perhaps one of the greatest indicators of the extent to which the telephone has has become a ubiquitous feature of global culture is that the word ‘telephone’ itself has been adapted into most languages the world over.  We know that the telephone connected people, but what was the transformative effect it had over how people communicate with one and other?  One anecdote about the origins of the word ‘hello’ suggests the extent to which most people may not even be aware the telephone has effected our discourse.  It is written that Hungarian inventor Tivadar Puskas shouted “Hallom!”, or “I hear you”, into the phone for the first time in telephone conversation in 1877 in reply to the voice of another person.  And thus the expression “hello” was introduced to the English language (Wikipedia, 2011b).

Prior to the telephone, communication over great distances was conducted either through the telegraph or letter mail networks such as the Pony Express.  The transition from asynchronous written communication and coded symbols to synchronous oral communication would have many profound effects on every aspect of life.  While the mechanical and logistical effects of the telephone usage became quickly evident in areas such as business and politics, the impending socio-psychological effects were less clear.  These social effects can be distinguished into to categories defined by those who viewed the introduction of the telephone with either optimism or pessimism.

Historian Herbert Casson wrote in 1910 that “with the use of the telephone has come a new habit of mind.  The slow and sluggish mood has been sloughed off… life has become more tense, alert, vivid.  The brain has been relieved of the suspense of waiting for an answer… it receives its reply at once and is set free to consider other matters” (Kern, 2003).  An optimist would likely be inclined to view the use of the telephone from this beneficial perspective.  Not only were people now alert and vivid, they could also be more productive, easily communicating with whom they needed at a time of their choosing.  People living in rural settings were now more easily able to overcome their isolation by simply picking up the phone.  This advantage was also was also held by women who were able to connect more easily with social circles they previously may have been isolated from (Fischer, 1994).  Men, in turn, were able to court women over the phone; some even proposed marriage (Kern, 2003). Liberties were taken with operators that men would never think of taking in person.  The personal nature of face to face interactions were immediately removed.  Moreover, the telephone essentially made it possible for a person to be in two paces at once, responding in an instant to the thoughts and feelings of another over great distance (Kern, 2003). Pessimists, however, had a long laundry list of reasons as to why the telephone was a great harbinger of sociocultural diminishment.  The telephone was the first electric medium to enter the home and unsettle customary ways of dividing the private person and family from the more public setting of the community (Fischer, 1994).

This intrusion was similarly mirrored in the hotel rooms of major cities where a telephone in each room was viewed by some as another invasion of one’s privacy.  Interestingly, yet another argument against the telephone was not against the intrusion into private life but as a cause of increasing reclusion into privatism.  Some blamed the telephone for people’s general withdrawal into seclusion as the need to engage in public spaces in order to communicate became less important (Fischer, 1994).

Psychologically speaking, pessimists pictured the recipient of a call as first suspended in waiting and then disturbed by the intrusion. Indeed, waiting for the telephone to ring became a symbol of loneliness and helplessness (Kern, 2003).  Waiting for the telephone to ring is more tormenting than waiting for a letter, because it may happen at any time, while the letter either does or does not arrive in the daily mail.  One may thus prepare for a letter in a way that is impossible to prepare for a telephone call (Kern, 2003).  The benefits to the caller in terms immediacy and result are juxtaposed against the heightened anxiety and intrusiveness of the call to receiver who is compelled to stop whatever he is doing and answer.  The receiver is forced into a passive role as the caller can prepare for the conversation in a way the receiver cannot (Kern, 2003).

Clearly there was a cost – benefit analysis to be made in the use of the telephone.  Another example of the interesting dichotomy of its use can be found in an anecdote from French novelist Marcel Proust who wrote in a 1902 letter on both the closeness and separation he felt in his first telephone experience with his mother immediately following the death of her parents.  He wrote, ““suddenly her poor shattered voice came to me through the telephone stricken for all time, a voice quite other than the one I had always known, all cracked and broken; and in the wounded, bleeding fragments that came to me through the receiver I had for the first time the dreadful sensation of all things inside her that were forever shattered” (Kern, 2003).  Telephone conversations clearly can connect people over great distances, but as this story illustrates, they offer little comparison to face to face interaction, and can even exacerbate feelings of distance.

The socio, cultural and psychological reservations some may have had to the use of the telephone did nothing to slow its expansion.  Indeed, technological progress is mechanical and relentless.  In 1891 the first underwater telephone cable was laid between England and France.  In Britain 600,000 telephones were in operation by 1912 and in Germany and America there was even faster growth with 1.3 million and 10 million telephones in use, respectively, prior to World War I (Kern, 2003). The proliferation, expansion and development of telephone networks around the world precipitated a number of other technological advancements in information communication technologies.  Digital telephony, IP telephony, data transmission through telex, fax and dial up internet are all as a result of the invention of the telephone.  Clearly it has had a transformative effect on the way in which people communicate with each other, both in the the mechanically and socially.

It is interesting to ponder the oral nature of telephone communication, as its principal precursor, the letter, was based on written literacy.  In a sense humankind has taken a full circle from principally oral communication, to written, and back to oral.  The development of the internet, built upon an oral telephone network, appears to have briefly returned us to the supremacy of the written word.  The internet, however, with its potential for video conferencing and VOIP has diversified the ways in which we may utilize a single medium with multiple literacies.  The implications for education in this field are no less exciting with students and educators around the world exchanging ideas and learning from each other – all of this being precipitated by the telephone.  Walter Ong (1982) has astutely described how writing, as a form of communication, altered human consciousness.  From this argument we can extrapolate that the way in which we communicate is vitally important to the formation of our consciousness.  The invention of the telephone was a watershed moment in our collective consciousness.  It forever altered the way we interact socially, and was the forerunner of many of our most important communication technologies we enjoy today.

Fischer, Claude S. (1994). American Calling: A Social History of the Telephone to 1940.  University of California Press.

Wikipedia, (2011b). Invention of the Telephone.  Retrieved from http://en.wikipedia.org/wiki/Invention_of_the_telephone  Accessed October 29, 2011