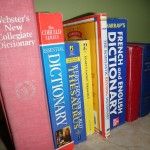 What classroom would be complete without a dictionary?  Even hundreds of years ago, this may have seemed impossible.  The dictionary has always been an educational tool for enquiring minds.  People use them to learn languages, check spellings, look up meanings, find the right word to convey precise meaning, find synonyms to enhance a keyword search, preserve dying languages, and record or standardize a national language.  The dictionary in all its forms is indispensable to and inseparable from education.

In 1845, excavations at Nineveh brought to light the library of Ashurbanipal, the 7th century BC King of Assyria (Hirst, 2011).  Among the library’s treasures are bilingual Sumarian-Akkadian wordlists written in cuneiform on clay tablets.  Learning the languages of your neighbours (or future conquests as in Ashurbanipal’s case) can be useful.  Ashurbanipal’s library is an amazing triumph for human literacy and a stunning product of ruthless empire building.  The collection was amassed partially through forcefully acquiring literary works as the spoils of war (Wikipedia, 2011b).  However, if Ashurbanipal had not been educated to read cuneiform, he may not have built his library.  The loss to our current knowledge of Mesopotamian history would have been significant.

The importance of learning languages in order to further one’s education is evident throughout history.  Many early English dictionaries were bilingual with Latin or Greek so that scholars could learn to appreciate the classical works written in these languages (Sobala, 2001).  Some dictionaries were dedicated exclusively to the words used by specific classical writers such as Homer or Cicero (Considine, 2008).  In the margins and between the lines of manuscripts of the Latin classics as well as Christian works, scholars wrote annotations about the meanings and usage of words among other things (Sobala, 2001, Weijers, 1989).  These became known as glosses.  Eventually, these glosses were copied to separate manuscripts whence they could be used to elucidate other works.

Dictionaries document how the human view of knowledge of the world has changed over time.  Most early dictionaries were ordered according to a hierarchy of knowledge about the world (Helgason, 2010, Hüllen, 1999).  Through this hierarchy of God’s creation, we have a window onto the theory of the world held at the time.  The topical arrangement of dictionaries is also perhaps indicative of the oral tradition of classical and medieval mnemonic methods of learning.  The division of words by subject facilitated teaching and learning.  Dictionaries were used as textbooks from which students were obliged to study or even memorize long passages verbatim.  Happily, modern teachers have many more efficient and effective methods available to help their students learn about the world.  These days, teachers teach students how to use the dictionary as a reference tool (Leaney, 2007).  However, it is unfortunate in my opinion, that its fascinating history is not commonly taught or known.

By the 18th century, alphabetical arrangement became the norm reflecting the popular notion that knowledge is limitless and that the known world can and should be systematically categorized (Helgason, 2010). It could not be bounded by a Christian-based hierarchical knowledge structure.  When Samuel Johnson’s A Dictionary of the English Language was published in 1755, alphabetization formed part of the definition of a dictionary.  Perhaps the earliest alphabetized dictionary can be found as part of a grammatical treatise, Summa grammaticalis quae vocatur Catholicon, or Catholicon written by John Balbi in 1286 (Weijers, 1989).  Unlike Johnson, for whom alphabetization to the last letter of a word was common, Balbi was obliged to explain the process in detail.  Prior to Balbi’s work, alphabetization generally only applied to the first three letters of a word at most.

Language is inextricably linked to culture.  Therefore, dictionaries have the power to reflect and capture some aspects of the culture to which they belong (Hüllen, 1999).  Samuel Johnson wanted to educate his readers on more than the meanings of words and as a result, included some lengthy quotations.  For us, these quotations reveal the political and religious views of his time (Rivero, 2009).

Some authors sought to preserve endangered languages and by extension, cultures, through writing dictionaries (Considine, 2008).  For example, Robert Estienne and his son, Henri, wrote dictionaries with this purpose in mind for Latin (Latinae Linguae Thesaurus,1532) and Greek (Thesaurus Graecae Linguae, 1572).  Henri’s Greek dictionary was considered the leading authority for classical Greek translation until the 19th century.   Both of these dictionaries developed into online editions (Bayerische Akademie Der Wissenschaften, 2006; University of California, 2009).  My colleague, Doug Connery, writes in his ETEC 540 blog about a repository of words for Canada’s aboriginal languages called First Voices, which has been created for the purpose of preserving those traditionally oral languages.

At first blush, the dictionary seems an unlikely emblem around which a nation could find its unique identity but this is indeed the case in several countries (Helgason, 2010; Hüllen, 1999).  Jakob and Wilhelm Grimm were raised in a culture awash in a national identity crisis (Paradiz, 2009).  Socially fractured Germany enviously looked on while France and England enjoyed the benefits of national pride.  The philosophy of Romanticism popular in Europe at the time elevated the simple life of the commoner to a higher moral plane.  The Grimm Brothers’ collection of fairy tales was a reaction to the need to develop a national identity which reflected the knowledge of the common people.  In 1854, they published one of the first German language dictionaries with the noble aim of making the national language available to everyone (Christmann, 2001; Echoworld, 2003).  After 150 years, Germany’s national “treasure” is available to the world on the internet.

In true American capitalistic form, Noah Webster published An American Dictionary of the English Language in 1828 as a money-making venture (Landau, 2005).  His ambition was to standardize American English and establish his dictionary as a nationally recognized American English language authority.  It is Webster we can thank for American spellings like color and center.  The implications of his spelling reforms can be felt the world over whenever someone uses the default Microsoft Word spellchecker installed on their computer.

Today, the Oxford English Dictionary is considered the most comprehensive and reliable authority on the English language.  Published in sections beginning in 1884, it took nearly 50 years to finish (Oxford English Dictionary, 2011; Wikipedia, 2011a).  Like all dictionaries, revisions add words and remove others in an effort to better reflect the living language.  Inevitably, there are controversies around which words should be included in the latest revisions (Fatsis, 2011).

In this modern age of digital accessibility, I am unlikely to buy another paper bound dictionary to add to my collection of eight.  How well will students of tomorrow need to understand alphabetization if they can look words up on the internet without it?  Will the Oxford English Dictionary ever include American spellings because they have crept into the everyday vernacular outside America?  The internet does not signal the death of lexicography by any means.  The evolving nature of language guarantees its survival well into the future.

View a fun video on the history of the English dictionary:
[youtube=https://www.youtube.com/watch?v=c7W7UgFxri8]
(The Age of the Dictionary)

Fatsis, S. (2011).  Word freakout:  The latest brouhaha over changes to the Scrabble dictionary.  Retrieved from http://www.slate.com/articles/technology/gaming/2011/05/word_freakout.html

Oxford English Dictionary. (2011).  History of the OED.  Retrieved from http://www.oed.com/public/oedhistory

Sobala, J. (2001). Early history of the dictionary in England. Retrieved from http://homes.chass.utoronto.ca/~cpercy/courses/6361Sobala.htm

Wikipedia. (2011a).  Dictionary.  Retrieved from http://en.wikipedia.org/wiki/Dictionary#cite_note-8

Wikipedia.  (2011b). Library of Ashurbanipal. Retrieved from http://en.wikipedia.org/wiki/Library_of_Ashurbanipal

2 Responses to The Dictionary & Education