Radio and television, which often have been used for its entertainment value has had a great impact in society.  Their communicative value is quite substantial and both in their unique way have influenced people in a variety of ways.  They have influenced people’s views and thoughts on social and political issues and they have affected oral and literacy skills.  As they both provide a unique communicative medium, they both have been used in education in successful and not so successful endeavors.  In this essay, I will examine the impact of radio and television, their uses in education and how they have influenced literacy and orality. 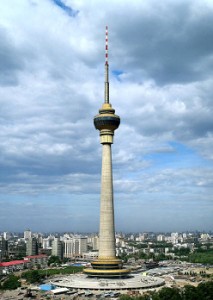 The development of radio shifted people from reading the news to experiencing the news.  They could hear presidents speak and they could experience events such as Lindburgh landing in Paris or the D-Day invasion.  This form of media communicated to the masses in a very unique and experiential way.  With the ability of this new media to communicate to the masses, there was a flood of people who sought to get on to the radio to influence people in one way or the other (Lewis, 1992).

As the radio provided information to a broad spectrum of people quickly and efficiently, it was soon attributed to changing public opinion and certain voting results.  The radio also provided music, drama and other cultural activities to people who may not have previously had access to such shows.  In addition, similar to the internet, incorrect information was sometimes broadcasted.  Another issue with radio was that it was often controlled by powerful external sources and so the information broadcasted was often censored or restricted in some way.  Furthermore, there were often issues with establishing radio stations at the time which provided an impediment to its spread (Tyler, 1935).

Radio’s use in education 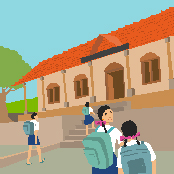 The radio also appealed to educators as they believed that it would revolutionize how they taught people (Reiser, 2001).  As radio had the capacity to provide immediate and universal means of communication, it was thought that there was great potential to change the educational landscape (Tyler, 1935). Tyler(1935) stated that as the printing press had the ability to multiply written materials, radio had the capacity to multiply oral communication.  Applications of radio in education included music hours and school broadcasts, with the schools running and producing the shows themselves (Tyler, 1935).

As radio was a profit venture, educators often struggled to gain access to it.  The allocation of broadcasting time for advertisements often impeded the radio’s use in education.  Broadcasters often only allowed radio time to be used for educational purposes if that time did not affect advertisement times and their bottom line (Tyler, 1935). 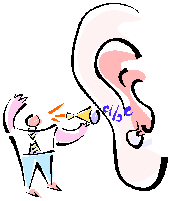 The way that the information was presented in radio is also very different than in other media.  As radio is meant to be listened to, the text needed to be presented not only in a logical way, but it also needed to be represented with some repetitiveness, which gives cohesion to the text.  Also another unique quality of radio is that it can’t be scrolled back or searched through like print media (Bearne, 2003).

Radio had an interesting influence of writing.  The shows on radio often conveyed a caliber of writing that the listeners sometimes aspired too.  For instance, after listening to “The Orson Wells Theatre” listeners often compared their work to Orson Wells.  In addition, although the media of radio is an oral experience, it also encouraged people to write.  For instance, after hearing shows such as Orphan Annie, listeners were sometimes moved to write letters to radio stations to obtain decoder rings (Brandt, 1995).

The introduction of the television has greatly impacted society.  Much like radio, television also allowed the masses to experience events simultaneously as they happened.  One such example is the Moon Landing.

Since the 1950s there has been an upward trend of television use in households and its introduction has influenced how people spend their leisure time (Comstock, 1978).  In the earlier years when television was not accessible to every house, families often got together to watch television (Brandt, 1995).  Unlike radio, newspapers and cinema newsreels, television had the power to provide a more direct experience of current events (Mandelbaum, 1982).

Through documentaries, news reports and storylines, television is thought to have influenced certain changes in society by bringing social issues, such as teen suicide, incest, domestic violence, racial tensions and gay/lesbian issues into everyone’s living room for discussion.

An example of television’s influence to change is with the Vietnam War.  Although television may not have directly been the cause for the stop of the Vietnam War, it is thought to be an indirect influence.  While there was already opposition to the war, television did influence how the opposition to the war was expressed.  Television became a communication medium that connected people from other parts of the country who believed theVietnam was wrong and also helped to give them a venue to show their feelings on the subject (Mandelbaum, 1982).

While it is true that television does influence 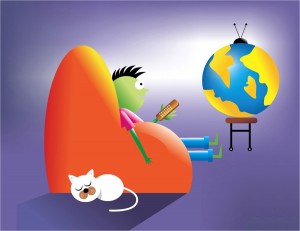 society, there are arguments that it detrimentally affects people.  In his book “Amusing Ourselves to Death”, Neil Postman states that the oral, literate and television cultures all process and prioritize information differently.  He states that television viewing weakens rational inquiry and that it is a very passive activity, whereas reading is interactive and requires higher reasoning.  He states that much of the programming on television is selected due to ratings and that there is not intellectual involvement or discussion with what is presented.  He also states that it is only through the written word that complexity and honesty of a subject can properly be communicated (Wikipedia, 2011).

Television’s use in education 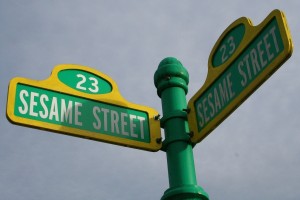 There was an increase in the use of television in instruction in the 1950s.  This was particularly due to the availability of funding from the Ford foundation and the allocation of educational channels by the Federal Communications commission.  These actions allowed schools to experiment with the usage of instructional television.  In certain cases, curriculum was presented via instructional television and in others certain subjects were taught using instructional television.  However, these experiments fell out of favour in the 1960s as the television wasn’t used appropriately in presenting the educational material.  While some blame the termination of funding for these types of projects, other reasons also include the added expense of bringing televisions into the classroom and lack of teacher buy in (Reiser, 2001).

With the advance of time and the prevalence 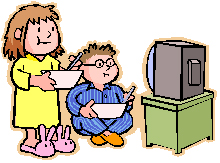 of television in the home, the educational benefits of television started to wane.  After years of study it was suggested that the more children watched television the lower the reading achievement.  Although many of these studies claim that television affects reading achievement in a negative way, there have been no clear reasons as to why this may be.  Many studies do suggest that children watching too much television displace their reading time.  A contributing factor to students not having enough time to read out of school may also include the other activities that they may be involved in (Neuman, 1988, Ritchie et al., 1987).

Television is also sometimes used in classrooms in discuss social issues.  Many times television episodes of “Degrassi” have been used in classrooms to talk about issues affecting teenagers.  The shows act as a jumping off point to stimulate relevant classroom discussions.  Television is also used in the classroom to help with writing skills.  Some educators have used documentaries and news reports, to improve essay writing.  They use the structure of these programs to provide a basis in how essays should be organized (Kortner, 1988).

Television and radio is an experiential medium that can work to give its listeners and watchers a unified experience.  Unlike print media, which is first experienced by a writer and then translated and conveyed to their readers, television and radio can allow people to experience a situation as it happens.  There is no translation by an intermediary; the viewers and listeners experience the situation and then make their own conclusion. The interesting part was how their introductions indirectly influenced society and learning.  Both of these mediums allowed people to connect in ways that print media did not allow.  Despite the unifying experiences of radio and television, television is thought to have a detrimental effect on the reading and studying time of children.  In addition, the programming selected in both of these mediums often call attention to the usefulness of their educational value.

Wikipedia (2011).  Amusing ourselves to death.  Retrieved from http://en.wikipedia.org/wiki/Amusing_Ourselves_to_Death

This entry was posted in Research Paper and tagged education, radio, television. Bookmark the permalink.

2 Responses to Radio to Television