Kress describes the intentional sequencing of information that is found in text and books. The format, determined by the author, sets information in a specific order of importance, which the reader is expected to follow. Kress uses two sentences to demonstrate this concept. “The sun rose and the mists dissolved” and “The mists dissolved and the sun rose”. The first sentence is describing an everyday meteorological event of the sun rising. The second is creating a visual description of a scene which sounds like the mythical world of fairy tail or mystery (Kress, 2005). The sequence of events is important for understanding and makes the readers dependent on the author for the order of their initial hearing: the author is in power.

In moving from text to web based information the reader is met with distinctive changes. The major difference that exists is that there is no dictated order which readers are expected to follow. Essentially, the author loses the power to control the sequential order that information is presented. Viewers first make their way to a homepage and from there have many options as to where they go based on the information they are seeking. The reader has many entrance and exit points and there is a subtle shift from seeking knowledge to seeking information. (Kress, 2005). That is a profoundly different notion of reading than that of decoding text.

This raises the point about effective website design marked by the difference in the search process of books versus the web. When a reader is looking for a book in a library, they are either looking under an authors name or subject area. They are taken to a physical place where their visual is the spine of a book. If more information is required, they will turn to the back of the book, the inside flap or perhaps the index. Rarely will they leaf through the body of information. Looking for information on the web leads to many different pages that are linked by a common theme of which the possibilities are endless. Once at a website the reader has many choices or paths to take before he decides if this is something that interests him.  There is no specific order that he is expected to follow which is very different to the reading of text.

The presence of multiple entrance and exit points for the reader creates a design challenge to website designers. Since readers can navigate their own path there exists a sense of insecurity about the visitors, who are no longer called readers but visitors (Kress, 2005). Designers have the difficult job of presenting a site that is appealing and interesting to the many diverse readers who might happen upon the site. Since there are many sites available to viewers they need to capture attention before the reader clicks the “back” button to move elsewhere.

Kress speaks of the difference between the written prospectus of the university and the homepage of the new website. The prospectus was filled with print and some black/white images. The visitors come for information, not knowledge. In this new semiotic world it is the visitors who fashion their own knowledge, which is a profound change from the previous relationship between authors, readers and knowledge (Kress, 2005). This creates an interesting dilemma for website designers and what should be contained on the homepage. The website serves many different populations so the decision on what to place where is not an easy one.

The following diagram shows the different views that a designer and viewer might be looking for visually. In fact as the viewer changes so does the required information. 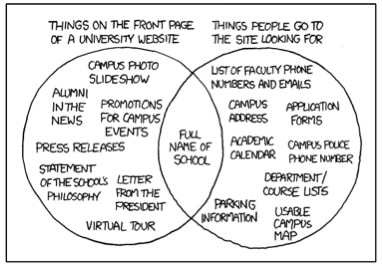 The logic of space works differently with multimodal presentation since all messages are simultaneously present. It is the viewers action that determines the order based on their interest. Speech and writing are based on words written in a specific order, while image representation is based on depictions. Words are created continuously as cultures advance, however the stock of words in any culture is theoretically finite. It is imperative that in order to be represented the word must exist. With images it is different in that you can draw what you want when you want. Unlike words, depictions are full of meaning, precise, and are essentially infinite (Kress, 2005).

In the 1950’s there was a clear sense of convention in regards to speech or writing and there was a certain competence, associated with those who shared a common acceptance of rules. Furthermore, all those who share in the same competence are considered naturally and socially the same. Now, in the 21st century there is a crisis in the areas of representation and communication and what constitutes competence is being questioned. This results in genres being insecure and an uncertainty about the previously accepted forms of representation. The once-dominant paper-based media, newspaper and book, are giving way to the screen (Kress, 2005).

Kress makes a good point where in the teaching field there are aspects of representation which have undergone changes while others have remained the same. He uses the example of a science textbook of today in comparison to one from years ago. The older textbooks were primarily text with the odd black and white diagram. Students are expected to learn from reading the text carefully. The more recent textbook page has an abundance of text and pictures and in fact it is difficult to say which one is carrying the most information. From experience, I have found that when presented with pictures and text, some students sometimes make an unconscious decision to focus on one rather than the other instead of seeing the interconnectivity. An example from a middle school math class math is one where students are given a table of information, a graph and text describing a situation. I have found that they zero in on one aspect only and consider it to be more valuable than the others. I am often met with surprised looks when I suggest that they consider all of the information equally and then decide on the importance.

Practices of writing and reading have changed and will continue to change and the mode of text may or may not be central. The activity of reading has to be rethought given that it was developed in the era when the dominant mode was writing and the dominant medium was the book. Traditional pages will continue to exist, stories will continue to be told, and narratives will continue to be written. The modes of speech and writing will continue because in certain situations they are the best modes for the situation (Kress, 2005). Hayles puts it well by saying that “media can be thought of as collective intelligences that explore their conditions of possibility by trying to discover what they are good for”. Kress’ point is a good one but he goes on to say that this revolution from text to other media is generation-related (Kress, 2005). With each generation there will be changes and of those some aspects will be kept and others will fade.

The new media make it possible to use the mode that is deemed most appropriate both for the matching the representation to the audience and also using the best medium to support the material. While creating new freedoms it also opens up a whole new aspect for readers.

Hayles, Katherine. (2003). Deeper into the Machine: The Future of Electronic Literature. Culture Machine. 5.

This entry was posted in Commentary 2 and tagged Kress. Bookmark the permalink.