The Development of the Electronic Book

***This is a second draft of this commentary.  I frustratingly lost my first one after it was done and this is my attempt to reconstitute it from memory! 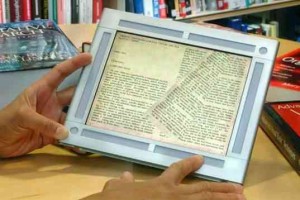 The Kindle, the Nook, the Bebook.  These are but three examples of the growing number of e-reader devices now available.  The proliferation of ebooks has paralleled the broader expansion of digital technologies.  The movement of text from the printed word to the digital word has portend a number of changes not simply in the way we view text, but also in the way interpret and understand it.  The development of the electronic book can best be contextualized by discussing the greater remediation of the written word.

In his 2001 work, Writing Space, Jay Bolter discusses in detail this remediation of the printed word, asserting that the creation of and presentation of hypertextual structures constitute a new form of writing and, moreover, reconstitute our understanding of existing text concepts (Bolter, 2004).  Firstly, the writing process of editing, storing and manipulating text was transformed by the digital word.  Extensive sources of knowledge could be accessed electronically and incorporated into the planning and drafting of documents (Heim, 1987, pp. 1-2).  Secondly, not only was the act of writing transformed substantially, but so was the way in which writing was shared.  Text which historically had been placed on scrolls or printed pages could now be found on webpages.  Indeed the concept of ‘scrolling’ and the turning of virtual webpages on e-reader devices links together historical practices with ways in which digital text is manipulated today.

The collection and condensing of vast amounts of textual information has also undergone a transformation with the advent of the digital word.  Traditionally, the library has been a place where the community stores and retrieves shared text from.  The utility of remotely accessing electronic versions of this information has proven far more convenient than the local neighborhood book repository.  Moreover, digitization of text allows a much larger community, including those who do not live within physical proximity, to access the information.  The encyclopedia, similarly, has been the traditional means by which general knowledge and specific fields of knowledge have been indexed.  As the detail of this knowledge has grown it has become impractical to house it on sheets of paper.  Enter the advent of hypermedia and the convenience of digitally stored text which allows multiple volumes to be contained on a single microchip.  The greatest example of the online encyclopedia is the popular Wikipedia.  Traditional encyclopedia’s required printed updates at regular intervals coordinated by managing editors.  Wikipedia harnesses the power of the ‘crowd’ by encouraging amateur editors and field experts alike to edit its content at any time.  This production of digital content by the same people who consume it is yet another example of the benefits of electronic text.

Flash forward from the infancy of digital text and the benefits seen in the collection and condensing of textual information can now similarly be viewed in today’s e-readers.  One of the first popular e-books was the Rocket E-Book.  A simple device with a bright, small display initially enticed consumers because readers could download their text and read them offline (Bidgoli, 2004).  The portability traditionally offered by a paperback remained, but now, as was illustrated with the digitization of the encyclopedia, a consumer could simply download multiple volumes on a single reader.  This is often the most cited benefit of an e-reader as the download saves the consumer the time of going to the store, and also the space needed to store multiple paperback volumes.  Bolter (2001) describes what he feels is one of the most useful features of digital readers when highlighting the ability to search for words and phrases within the text.  In this regard an entire text becomes “immediately available to the reader in a way a printed book is not.” (Bolter, 2001, p,80).  The utility of an e-reader, however, has gone beyond even what Bolter had been writing about in 2001.  Now the ability to manipulate font size, backlighting and the addition of interactive media windows in the body of a text make a e-reader more functional and enjoyable than ever.

There are, however, also some drawbacks to the use of e-readers.  Firstly, they rely on battery power, which immediately suggests that at some point the battery will run out.  This obviously limits its portability to an extent.  Secondly, e-readers are uniformly more expensive than traditional paper books meaning they can be costly to replace if broken.   Thirdly, viewing a glowing screen for extended periods of time has been shown to cause eye strain and headaches (Sheehy, 2011).  Even worse, those who tend to use their e-readers regularly before bed can have their sleep habits affected (Milian, 2010).

It is clearly evident that the popularity ebooks is growing.  The shift from the printed word to the digital word has been accompanied by a number of changes – many for the better.  By contextualizing the development of the e-book against the greater remediation of the printed word, we now better understand its evolution and current utility.  A final observation from Bolter is that despite the fact we appear in a transition from print to electronic writing, both of these mediums still need each other.  “Print forms the tradition on which electronic writing depends, and electronic writing is that which goes beyond print. Print now depends on the electronic too, in the sense that printed materials find it necessary to compete against digital technologies in order to hold their readers. (Bolter, 2001, p. 46)  The question now is, will print continue to hold an audience, or will they too be converted to the digital word?

This entry was posted in Commentary 3 and tagged Bolter, ebook, ereader, hypertext, remediation of print. Bookmark the permalink.