Hangeul and Literacy in Korea

The Evolution of Hangeul and its Impact on Literacy in Korea

Back in a time when China’s influence dominated Asia, there lived a king with a heart for his people, the nation of Korea.  He worked hard to better their lives.  Behind the rice paper doors of his palace institute, he met with his most trusted scholars.  King Sejong had a dream for his people, he wanted them to have the freedom to communicate and express their ideas in their own language.  Through the creation of Han-geul, the written script he developed, Sejong revolutionized the nation of Korea facilitating an opportunity for all his people to be literate.

King Sejong ruled during the Joseon Dynasty of Korea from 1418 – 1450.  Since childhood, Sejong had recognized the importance and value of reading.  He was well educated and had an understanding of linguistics among other subjects.  When he became king, one of his first achievements was establishing an institute on the palace grounds to conduct studies and research.  It was called Jip-hyeon-jeon (Jade Hall) and he invited scholars to come and live there.  King Sejong invested his time and resources into projects that would benefit his people.  Even today, he is revered in Korea for his many accomplishments and impact on Korean society. 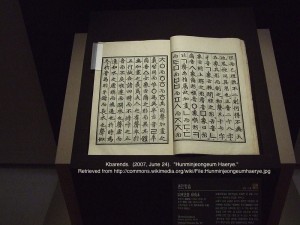 The Birth of Hangeul

Chinese and Korean languages stem from different linguistic families (Sampson, 1985).  While both are syllabic, Chinese is an isolating language with each word having its own syllable.  Korean, on the other hand, combines syllables to form words.  Both languages also differ in terms of grammatical structure.  Chinese places the verb before the object, while Korean uses it at the end of a clause.  Due to China’s influence over Asia, Korea had adopted China’s written script to represent Korean vernacular (Diamond Sutra Recitation Group, 2007b).  However, this Chinese script was inadequate to qualify all the Korean sounds in the language and there were no characters available to represent proper nouns.

Lacking a native script, only a small minority in the nation was well read.  Rooted in Confucian ideology, the Joseon dynasty of Korea adhered to a social class order where the elite were highly trained and educated, while the lower classes were devalued and illiterate.  With literature being transmitted in Chinese, it was studied and read only by the yang-ban, the upper class in Korean society.  Although this was culturally accepted, this literacy gap was slowing down the nation’s progress.  With a background in linguistics, Sejong sought to bring about a radical change for his people.  His goal was a literate society stemming from a written script that would accurately represent the Korean vernacular.

In his 25th year of reign, King Sejong committed his time to this new literacy project.  With the help of esteemed scholars, he created an alphabet unique to Korea.  He named it Hun-min Jeong-eum, which is translated “the proper sounds for instructing the people.”  There were 28 symbols or alphabet phonemes designed, each representing an individual sound (Sampson, 1985).  (Four of them are no longer used today).  Organized into two categories, consonants and vowels were created.  The consonants were developed to represent the speech organ’s position articulating the sound (see Appendix).  Additional strokes were added to some of the consonants to show an emphasized aspiration, thus creating 18 different consonant symbols.  Vowels were formed based on the Eastern Philosophy symbols of Heaven, Earth, and Man (see Appendix).  Different arrangements of these symbols were applied to create 10 separate vowel phonemes.  Together the consonants and vowels combine to form syllabic units.  Syllables may be combined in the following ways:  CV, CVC, CVCC, V, VC, or VCC (Lee, 2009).  Compared to its Chinese counterpart, the simplicity of the graphic elements was thought to make the new Korean script easy and efficient to read.  The syllabic units could be read from left to right or arranged and read from top to bottom.

Only 3 years after its drafting, Hun-min Jeong-eum was first published in 1446.  Along with its introduction into society, King Sejong provided a manual, which explained the theory and purpose behind its creation.  It was not derived from ancient written languages, but rather based on scientific principles and the cultural philosophy of that time.  Linguists remark at this impressive written script because of its short development period and its unique alphabet.  Most writing systems begin as hieroglyphics (or pictographs) and progress to ideographs, followed by syllabic characters, and finally become phonemic alphabets (Diamond Sutra Recitation Group, 2007a).  Hun-min Jeong-eum was initiated as both a phonemic and syllabic written script.  It was later renamed Han-geul, which translates “the Script of Korea.”

Upon publishing and releasing Hun-min Jeong-eum, King Sejong was quick to receive opposition from his court officials and criticism from other scholars.  They were concerned that the use of this “made up” language would reflect poorly on the nation and cause them to be associated with other nations who were not using the preferred Chinese script.  Compared to the esteemed Chinese script, this new system had no value and, in their minds, would be of no benefit to government.  The yang-ban, the upper class of the nation, were also fearful of the potential disruption in government that could arise from the lower class having access to written materials and being given voice.

King Sejong disregarded their concerns and maintained his belief that all people, no matter what their class, should have equal opportunity to read and learn, and express their opinions about society.  He promoted the new alphabet among his people and asked scholars to produce literature using the Han-geul script.  One of the first documents created in Han-geul was the Yong-bi-eo-cheon-ga (Wright, 1996).  It was valued not only for its content of folk songs and poetry, celebrating the Joseon Dynasty, but it was also regarded as an important historical document that outlined Confucian principles.  Moreover, King Sejong delivered his speeches and ordinances both in Chinese and the Han-geul script (Diamond Sutra Recitation Group, 2007b).  He required that all public notices be written in Han-geul and that there be a compulsory section on the civil and military examinations requiring its use.  With conviction and persistence, King Sejong pursued his dream of a literate society until his death in 1450.

While the creation and original publication of Han-geul was accomplished in three years, it took centuries before it became the dominant writing script of Korea.  Although enforced by the King during his reign, the upper class was not interested in its implementation.  Instead, Han-geul was first adopted amongst the “commoners”, the lower class, and then gradually over time its influence expanded.  Women, who culturally were considered at the bottom of the societal scale, helped spread the popularity of Han-geul as they used it in personal correspondence (Yeom, Yi, Kang, & Kim, 2008).  Also, fiction that was imported from China by the upper class, was passed around in the literary world and eventually translated into Han-geul.  Thirdly, literature pertaining to medical and agricultural developments was made available in the Korean Script to be read and practiced by the working class.  This dissemination of new knowledge through Han-geul was one factor that led to affluence or economic prosperity in 16th century Korea (Wright, 1996).  When Korea decided to open itself up to the West, the use of Han-geul was further applied in an attempt to strengthen and modernize the nation.  The use of Han-geul was helping to establish Korea’s national identity.  In 1895, it was finally adopted as the nation’s official written language and was applied in the national education system (Yeom et al., 2008).  King Sejong’s dream of universal literacy among his people was realized.

Today UNESCO recognizes the linguistic achievement of King Sejong through the “King Sejong Literacy Prize”.  He is honored and esteemed because of his desire for the nation’s literacy.  The South Korean government celebrates the creation of Han-geul with a national holiday on October 9, while North Korea commemorates this achievement on January 15.  According to the World Factbook Statistics (2013), both North and South Korea are maintaining high literacy rates for their total populations.  South Korea’s fast growing economy can be attributed to the country’s commitment to education and literacy.  Furthermore, Han-geul has not been impeded by the use of new technologies.  With efficiency in mind, the Korean keyboard was developed having the consonants positioned on the left and the vowels on the right.  This ergonomic design matches the CVC syllabic units or left and right hand movements in typing (Yi, 2004).  Even though Korea has undergone significant changes in its history, Han-geul has withstood the test of time.

Although in its infancy, Han-geul was not well received, it is now recognized as one of the best scientific writing systems in the world.  Han-geul’s popularity continues to increase as Koreans and foreigners alike invest in learning this language system.  With its visual simplicity and syllabic organization, Han-geul is efficient as well as easy to process and read.  King Sejong can rest assured that his writing system fulfilled its purpose and will continue to benefit his people for generations to come. 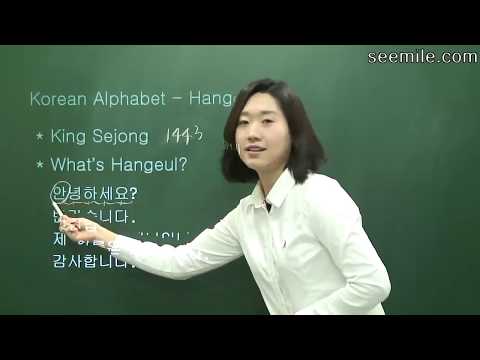 This entry was posted in Research Paper and tagged Hangeul, literacy, Sejong. Bookmark the permalink.

2 Responses to Hangeul and Literacy in Korea