In 2015, the Republic of Palau took action to combat our global overfishing crisis by implementing a reserve area that would close 80 percent of Palau’s waters to commercial fishing by 2020. The time has come, and Palau has now made 500, 000 square kilometers of their water a marine protected area (MPA). Although the creation of MPAs is intended to help protect the marine ecosystem, they are often not very effective and can have negative impacts on the social and economic aspects of the country. Thus, we must ask ourselves, is this really the best management strategy to creating a sustainable island nation? 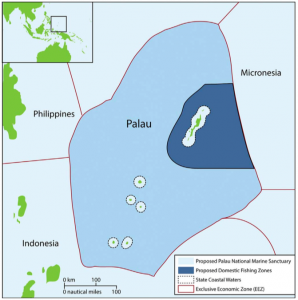 The Republic of Palau is an archipelago consisting of over 700 islands in the Indo-Pacific, of which only 12 are inhabited by humans. Palauans have a long history and strong relationship with the ocean, and it is central to their culture, economy, and livelihoods, as indicated by a 2003 study that stated that nearly 90 percent of households in Palau are linked to fishing. In the past, the practice of “bul”, which bans the fishing of certain parts of the reef during spawning and feeding season, was used to manage the marine ecosystem surrounding Palau, consisting of over 1300 species of fish. This management method was successful, up until the modernization of fishing gear that enables humans to be far more efficient at catching fish than the marine ecosystem can sustainably handle. 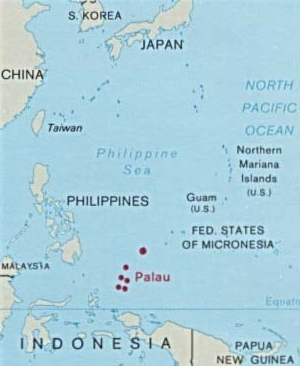 According to the United Nations, upwards of 90 percent of the world’s marine fish stocks are currently fully exploited, overexploited, or depleted. Catch biomass is almost half of what it was a mere decade ago, and the fish that are being caught are getting increasingly smaller. In our society today, peoples’ decisions and actions are primarily driven by economic considerations, which are frequently linked to good short-term economic return, but are highly unsustainable in the long-term. We thus require better management strategies in order to protect what’s left of the marine ecosystem. Areas in Palau that were categorized as MPAs in 2015 have already seen improvements in local fish stock quantities, but that does not necessarily mean the same will occur in all MPAs.

The concept of bul has clearly proven to be successful in the past, which is why it is used as the underlying philosophy of the new 500, 000 square kilometer MPA. However, the difference between bul (seasonal fishing bans) and MPAs (year-round fishing bans) lies within their duration of implementation. As fishing is such a large part of Palauans’ culture and economy, it is important to prevent the further depletion of the marine environment, but at the same time the people of Palau rely so heavily on it on a daily basis, the banning of fishing would result in a major economic downturn. In order to accommodate both aspects of this issue, I believe that a mixture of both year-round MPAs and seasonal MPAs should be implemented in Palau.

To read more about the fishing ban in Palau please visit: https://europeansting.com/2019/12/12/this-pacific-island-has-banned-fishing-to-allow-the-marine-ecosystem-to-recover/