In the tropics of the Eastern Pacific Ocean, yellowfin tuna and dolphins can be found swimming in tight groups. Tuna fishers during the 1960s and 70s would follow the easily spotted dolphins right to the tuna, net both and let the dolphins go. Unfortunately, the dolphins did not always survive this experience. Dolphin moralities led to the USA’s 1972 Marine Mammal Protection Act aiming to end this practice, and the “dolphin safe” stamp on our tuna cans symbolizing that no dolphin deaths were associated with the tuna inside(1). If you are not yet aware of just how inconsistent the meaning behind that label is I suggest you have a look here, but for now lets look beyond the dolphins. 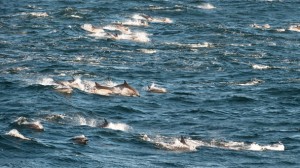 Setting nets on groups of dolphins is not the only way to catch tuna, but it is arguably the most efficient way. Only tuna large mature tuna (exactly what fishers are after) are capable of swimming fast enough to keep up with a group of dolphins. Setting a net on a group of dolphins results in almost nothing in your net that you didn’t want to catch (called “bycatch”) apart from the dolphins. Alternatively nets can be set directly on schools of tuna, which results in three times the bycatch of dolphin sets(1). Or nets can be set  on groups of fish attracted to floating objects in the ocean, like logs, which are called FADs (fish aggregating devices). This method creates 300 times the bycatch of dolphin sets(1). Species that end up as bycatch in tuna nets include sharks, rays, sea turtles, and other fishes. Some of these groups include endangered species(2). Bycatch is either thrown back into the ocean, or kept and sold usually as ground up fish meal to use as animal feed. Either way bycatch generally suffers a high mortality rate. As the practice of setting nets on dolphins was pressured out of popularity after 1972 other species, including endangered ones, were subjected to vastly increased fishing pressure. Such heavy protection measures might have had more of a justification if it were put in place to relieve threats against an endangered species, but none of the dolphin species being targeted were considered threatened(3). Dolphin sets did lead to dolphin population decline, however this was not necessarily the largest threat to the ecosystem(3). This unfortunately was not reflected in the resulting policy, which succeeded in protecting a single species, but it was at the expense of many others.

Dolphin safety is still a major issue when it comes to tuna, as it should be. However there are also campaigns such as “Eco-Safe Tuna” which acknowledge that dolphins don’t encompass all environmental issues in the tuna industry. Eco-Safe strives to distinguish fisheries that take time to reduce their bycatch and impacts of other destructive fishing practices. As we go forward it is important to remember that a single species can can help shine light on an environmental issue, but it’s security should never be allowed to eclipse the stability of its ecosystem. 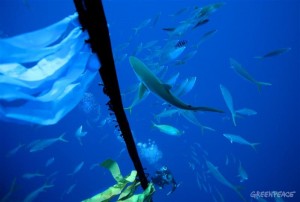 Fish near a FAD (Fish aggregating device) in the Pacific Ocean.