It is with excitement that the city of Vancouver’s streams are once again providing habitats for spawning salmon. The reports that creeks have been seen teeming with fish are an important signpost of the restoration efforts that volunteers have been putting in. Restoration projects have been commonplace for a couple of decades now, including the noteworthy resurgence of salmon in Spanish Banks in 2000.

This restoration is a culmination of the people of Vancouver caring for these salmon despite their extremely small number. Stream keepers in West Vancouver can count the number of salmon in Hadden and Brothers Creeks in short time and without reaching one hundred, yet such numbers are a staggering success in creeks which were once temporarily vacated, or completely uninhabited as Hadden and Brothers Creeks both were.

Before Vancouver became its current metropolis, it was home to dozens of waterways, many of which are now buried, paved over, or destroyed. 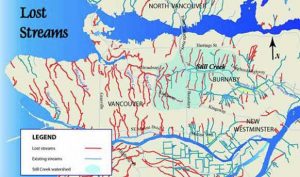 The restoration of streams and waterways is well documented by Canada’s Department of Fisheries and Oceans and their Salmonid Enhancement Program (SEP), along with the Pacific Salmon Foundation’s Community Salmon Program (CSP). DFO has reported that between the SEP and the CSP, almost 1.5m square meters of salmon habitat has been restored since 2008, however this is BC wide and not solely in Vancouver.

The fact that this restoration takes place at all when the results (number of fish that are seen in the spawning area) could almost be counted on two hands may seem pointless to some. But I argue that while it may not serve to directly impact the health of BC salmon, it fosters awareness and develops a connection to a valuable resource that is considered an icon of the province. Involving the community in conservation efforts has proven effective near and far, from the success of local arts societies in promoting stream health, to educational systems informing young children the benefits and history of nature (Primack et al. 1999).

Students at Parkcrest Elementary school participated in workshops and lessons as to why caring for the Pacific Salmon is so important.

It is likely that the involvement of school children and volunteers with the well-being of Pacific Salmon will not only restore spawning habitats, but develop mindfulness of a broader responsibility to protect the ocean. Perhaps better choices will be made when it comes to seafood consumption, individual fishing practices, or disposal of chemicals down drainage systems. With an improvement in any of these, we hope to see a positive effect on our city’s salmon habitability and hope to see a continuation in the efforts being put in by dedicated volunteers.