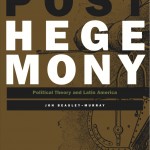 Posthegemony is an investigation into the origins, limits, and possibilities for contemporary politics and political analysis. Challenging dominant strains in social theory, Jon Beasley-Murray contends that cultural studies simply replicates the populism that conditions it, and that civil society theory merely nourishes the neoliberalism that it sets out to oppose.

In Posthegemony, Jon Beasley-Murray provides a superbly written and insightful theoretical evaluation of the shifting relation between culture and state in Latin America. — Gareth Williams