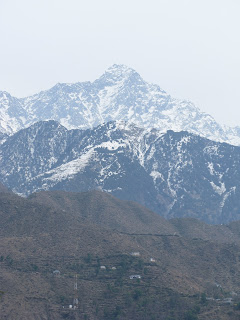 My nun friends are going to miss me. And I will miss them. Mcleod Ganj has been a pretty lovely experience and much needed reprieve.
To backtrack, I’ve been in the home of the Dalai Lama and countless Buddhist monks and Tibetan refugees for about a week now.
At first, I was quite lonely, despite the novel (for India) amount of smiling faces and “Namastes,” but after a few days, and shacking with a rad Brit named Siân Kidd, a marionette puppeteer who stayed to do a wood carving course.
Through an Australian monk doing his PhD I met a vague French girl who introduced me to a head monk guy who led me up some winding paths and stairs up a mountain (Mcleod Ganj is a hill station- my buns have been woken up) to some stone huts where 3 Buddhist nuns were living while on their one month holiday from the monastery. They were enthusiastic to learn English (enthusiastic being one of the words they keenly soaked up.) So every day, I went up the hill and hung out with the nuns in their hut, and they made me chai and we read folk tales and played word games and practiced pronunciation. Let’s be honest. I have no idea how to teach. Something in the arts MAYBE, but English!? Where to begin? But they were SO CUTE. And appreciative. They called me “Teacher.” (Kristina is hard to pronounce: ends up like Qwuistina at best.) Their names were Thukjay, Sonom, and Tenzin. 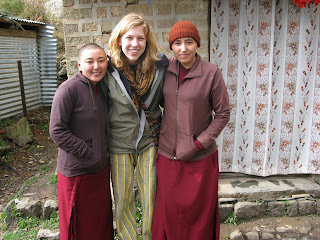 On the same day I began that, a monk approached me over lunch in a monastery run restaurant wondering if I could teach his sister English. I hung out with the monks for several hours and he (Sonom Gyatso) told me about Tibet, and how fabulous ALL Western people are. (I don’t know what TV shows he’s been watching, but obviously not ‘Two and a Half Men.’) I need not mention what he said about Chinese people. Earlier I had gone to the Dalai’s house including the Tibet museum. Tragic. Tragic. Tragic. How are these people not completely bitter!? Too much meditation mastering the emotions. GET ANGRY.
His sister never ended up coming, but I did end up tutoring a sweet little monk named Buga everyday who worked at the restaurant and spoke next to no English. So every day we practiced everything from ‘foot’ to ‘fork’ to ‘pencil.’ In the end we even mastered “open/close the door” and basic ‘yes it is…/no it is not’ questions. Sweetheart.
I managed to drag my sorry buttocks out of bed one morning to watch the sun rise over the mountains from my modest little balcony. A pivotal moment. 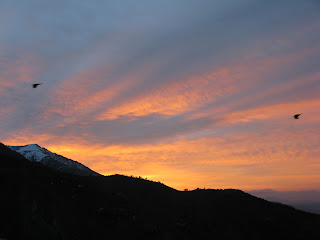 On another occasion I dragged myself to a morning mediation and yoga class with a jolly little man named Shivim. Sitting still for 40 minutes was admittedly painful (literally- it was cold!) but the yoga proved worthwhile as the sun shone in over the mountains. 15 years of dance somewhat paid off and I managed to not fail completely (I think I faked it pretty darn well actually!?)
But let’s not kid ourselves, I’m not turning spiritual on y’all or remotely WHOLESOME…
I went to an Indian pub. Had local “Apple Wine.” The cheapest brand. Tasted like vinegar.
On another occasion, on the night Siân and I shacked up we decided to celebrate her new independence (her mates were moving on to Thailand) and trotted off for some Indian Gin and Rum (about 2 & 3 $, respectively) and got crunk under the stars on the hotel restaurant balcony, with lightening flashing behind the mountains. We then retired for some ukulele in the room. After what we thought was some half decent harmonizing a knock came at the door- surprisingly not to tell us to shut up but because 3 Aussies and an Austrian had heard “Space Oddity” and had to invite us. Cal, Tim, Emma and Elizabeth. So we jammed with a guitar and not one but two (full sized- HEAVY) didgeridoos. Yes, the Australians had met a random Sadhu man in Rishikesh who made didges had all made one. Because they’re Australian. (I was sorry I forgot my pet beaver and maple syrup.) So Sian and I tried to learn ‘circle breathing’ (i.e. breathing in and out simultaneously) and jammed on everything from “Build Me Up Buttercup” to Bowie and Beatles to “Hey Ya.” Rad.
I also took a Tibetan cooking class to make “momos” (Tibetan dumplings.) Extremely simple, though the chef was comically serious and made us take COPIOUS notes. Now if I can just convert them to wheat free… 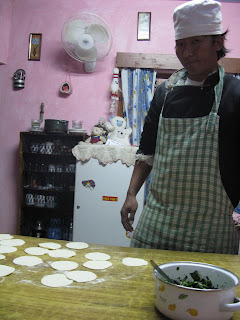 Tomorrow we move on to Rishikesh, pretty much the yoga capital of the world, then I’ll eventually meet up with Keegan in Delhi, who, by the sounds of it, didn’t have the epic Himalayan skiing adventure he was stoked up for and is somewhat keen to leave the country. But first I have more shopping to do. Okay I admit it. In a town full of the most reputably UNMATERIALISTIC people IN THE WORLD, I have become addicted to shopping. A shawl here, some Tibetan silver there… but a girl has to kill time somehow right? And in my defense, shopping in Mcleod Ganj is a workout on these hills. I’m going to need some serious yoga when I get to Rishikesh. 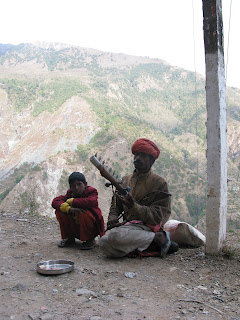 I want that instrument! Is it a lyre?