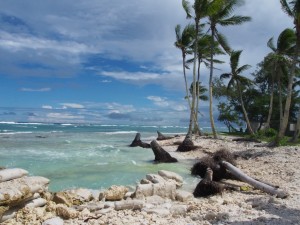 I have a feature (“Fantasy Island”) in the latest issue of Scientific American and accompanying online slideshow about the reality of sea-level rise in Kiribati.

If you are interested in what actually is happening in places like Kiribati, I encourage you to buy the issue. An excerpt:

A North American or European traveling to Kiribati may as
well be stepping through a wormhole into another universe. Combine
that naïveté with the reserved nature of the Kiribati people,
the custom of deferring to outsiders, the legacy of countless
past i-Matang asking about climate change and the lack of local scientific
capacity to verify claims, and a naturally flooding village
becomes a victim. Add in the geopolitics—the legitimate need for
a tiny country lacking agency on the world stage to raise awareness
of a threat to its existence—and the exaggeration about the
impacts of sea-level rise can look intentional, whether it is or not.
As my friend Claire Anterea of the Kiribati Climate Action Network
says, “This is not a story that you will just journalize in one
week or two weeks.”

The article is  a testament to all the wonderful people in Kiribati that I have interviewed and worked with over the years, as well as to Mark Fischetti and the editors at Scientific American, who were willing to embrace a story about the incredibly important but less glamourous nuances of climate change.

1 thought on “Life as a climate change poster child: the new Scientific American article about Kiribati”