We asked Mr. A. Khash – a host at the MGLRadio – to tell his story of inspiring our first guest Mr. Battulga Ganbaatar when he lost hope. So, we asked what the magic was that unlocked Battulga’s perseverance and fight for life.

One day, Mr. Khash decided to see someone at the hospital because he knew how difficult it is to be in hospital when there is no one who visits. So, he made lapsha – a noodle soup – and went to the Hospital for Injury and Trauma. “It’s always hard to start,” he said, but he went to the reception and asked if there was someone who never received visitors. After answering many questions from a surprised nurse, he met a guy who had lost his legs, was abandoned by his wife, and left with their daughter. Khash told the guy that he would see him at 2 pm every Tuesday. Khash said it was a good feeling that every Sunday his new friend at the hospital called him and asked for the time of his arrival. For them, food or snacks were not important, but the conversations and the feeling that someone needs you, as Khash stressed, Goyo [nice]. And he adds that he did not go to a hospital out of generosity, but rather to make his life interesting. In other words, although he did this for selfish reasons, it helped him realize the value of life. After visiting his friend for over six months, his friend asked Khash if he would continue to see him -once he was discharged from the hospital- in his home in the ger district in Bayankhoshuu, an outskirt area of UB. And of course, since it is not a project with end date, Khash continues his friendship with him. 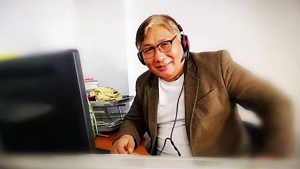 Photo: Khash himself (with the permission of Khash)

Some time later, while Khash was driving, he heard his new friend talking about him on the 104.5 radio station and he was thinking about making more friends. After listening to this broadcast, Battulga’s dad called Khash and asked him to see his son. So, Khash visited a handsome young man, who had a terrible accident and he looked at Khash with a puzzled look. Hence, Khash explained that his dad asked him to talk to him and they just talked. One thing that he realized throughout his life is to never give advice or try to change a person. Because when you give advice, it helps little, and instead creates additional stress for that person. Whenever he visits Battulga, he just talks about what happened or what he did – sometime, he would frankly talk about his terrible day and things he had done. And he just listened to Battulga. According to Khash, if you don’t feel his pain or have a similar experience, you are just lying and not helping.

For Khash, Battulga was a strong man who tried to use the bar to do pull ups and dumbbells. Battulga often asked “Khash brother, I will stand up, right?” Khash never answered that question because he didn’t know the answer. But one day, Khash asked Battulga if he believed his life would only continue after he stood up and he thought his life stopped when he was on the bed. Khash told Battulga what he would do if he could not stand up – he would be just waiting in vain. As Khash recalled, this conversation helped him to understand the reality and it was thought provoking. Another moment which Khash shared with us was about Battulga’s dream of learning English. Battulga kept telling him that he wanted to learn English and complained about not having someone who would practice English with him. After hearing this for a while, Khash told him what a demanding and spoiled person he was. If he were in prison, he would ask from the prison authority to bring him an English-speaking person to practice with him in the prison. There are many people who learned 2-3 languages while in prison. Here, Khash explained his understanding of advising or talking about reality. People should avoid giving advice on things they do not know about or advice they don’t trust themselves. Instead, they should be frank about things that they see and understand.

Being Selfish Makes Your World Smaller

Throughout the podcast, Mr. Khash explained how selfishness would make life boring. Once someone becomes self-centered and selfish, their worldview becomes narrow, and one is easily isolated from social interactions.  As you start talking to people and listening to their views, you begin to feel connected. This eventually helped him to find his place in the world – being a talk show host. During this pandemic, he stopped visiting people, but he still talks to them over the phone and keeps his friendships intact. Before the pandemic, he joined other colleagues who visited the people who were struggling and felt abandoned. And he did not want to publicize his good deed efforts. Frankly, he told us, he hates campaigning or doing humanitarian activities for political or even social credits.

Helping out a Chinese Woman

One interesting story, which would be worthwhile to share, is his story of helping an old Chinese woman to cross the road during the anti-Chinese period of the 1970s. He was an 8-year-old boy when he saw a Chinese woman, who had bound feet and was trying to cross the street. Without thinking about the consequences of helping the most-hated minority in Mongolia at that time, he quickly held her hand and helped her cross the street. While on the road, he hoped that she would walk quickly and was afraid of being noticed by other children of the neighbourhood. After crossing the street, the old lady held his hand and graciously thanked him. At that moment, Khash felt the joy of helping others.

This was the last episode of our Untold podcast and, another touching one. Especially, when he told about the moment when our first guest was asking Khash to bring a gun to end his difficult and hopeless life. Encountered with that moment, Khash did not know what to say, but managed to say that he would come back tomorrow. We don’t know if that sentence left Battulga realizing that there were people who would come for him and talk. Let’s end here with Khash’s word – just talk to people and help them with all your heart.

Jargalsaikhan Mendee is a Deputy Director of the Institute for Defense Studies of Mongolia. He holds a PhD in Political Science from the University of British Columbia, and MAs in International Relations from the US Naval Postgraduate School and in Asia-Pacific Policy Studies from the Institute of Asian Research of the University of British Columbia.
View all posts by mendee →
This entry was posted in Health, Mendee Jargalsaikhan, People with Disabilities, Podcast and tagged MENDEE Jargalsaikhan. Bookmark the permalink.