There is a growing intergenerational breach in Canada.  Consider three facts.

While Boomers approach retirement with more private income and wealth than previous generations of retirees, they leave far larger public debts than they inherited.

Although our economy doubled in size since 1976, our national debt nearly tripled.

Growing public debts amid greater private wealth for those approaching retirement invites questions about an intergenerational tension.  Do Boomers care that other generations don’t share the standard of living they now enjoy?

There is absolutely no doubt that Boomers care.   But the last federal election paints a worrisome picture.  Political leaders of all major Parties prioritized:

×      Strengthening pensions and reducing seniors’ poverty, even though poverty among seniors is already less than half of the poverty rate for families with young children.

By contrast, the generation raising young kids does not participate politically nearly as well, and they get a bad deal as a result.

We know they get a bad deal because national and international data show that Canadians have been slow to adapt public policy in response to the time, income and service squeeze with which the generation raising young kids struggles. 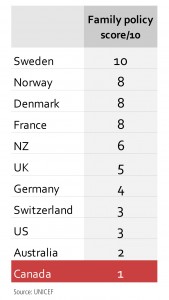 This is the case in all provinces, with some exceptions in Quebec.

A typical Canadian couple outside of Quebec will forgo $13,000-$15,000 in after-tax income when parents share a year to be home with a newborn age 3-15 months, even after collecting parental leave benefits.  In Sweden and Germany, policy ensures the same couple does not lose any after-tax income.

Despite the need for parents to have sufficient time in the labour market to manage stalled incomes and rising housing costs, and despite evidence showing the importance of quality environments for child development, Canada allocates just 0.34% of GDP to child care and kindergarten services for children under age six (2008).  This is just over half of the UK and New Zealand; and barely one-third of what is allocated in France, Sweden and Denmark.

Although Canadians say we value the role of parenting, Canadian workplace standards mean the typical Canadian employee works 300 hours per year (over 8 weeks) more than the typical Dutch, Norwegian and German employee.  While higher housing prices make this commitment to the labour market understandable, it erodes the opportunity to be home with kids.

Canada ranks among the industrialized countries with the highest rates of child poverty.  Child poverty in Canada is three to five times higher than the countries that make it a real priority to eliminate poverty among the generation raising young kids.

These poor policy realities beg an important question:  What kind of Canada do we want?  One that ignores the intergenerational breach?  Or a Canada that recommits to working for all generations?