To begin to discuss the issue of the domestication of foxes, it must first be established what the definition of domestication entails. Domestication does not have a particularly firmly established definition. However, one commonly cited definition comes from Edward Price, and describes domestication as “that process by which a population of animals becomes adapted to man and to the captive environment by some combination of genetic changes occurring over generations and environmentally induced developmental events recurring during each generation.” (Price, 1999) From this definition, two key points can be drawn: that domestication requires genetic change throughout a population, and that the friendly behavioural traits associated with domestic dogs and cats are not necessarily part of the package. 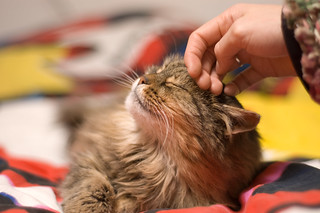 Domestic cats have been specifically bred for companionship for many generations. (Source)

Indeed, this becomes plain if one considers why humans domesticated animals in the first place – the reasons vary for different species. As another definition of domestication by Melinda Zeder states, it is “a sustained, multigenerational, mutualistic relationship in which humans assume some significant level of control over the reproduction and care of a plant/animals in order to secure a more predictable supply of a resource of interest[.]” (Zeder, 2012). By this definition, the “resource of interest” changes from animal to animal – for dairy cattle, milk; for pigs, meat; for hens, eggs. In all of these domestic animals, naturally friendly and affectionate behaviour towards people is not a prominent trait, as companionship is not the “resource” for which they have been domesticated. In other words, a domestic animal is not synonymous with companion animal. 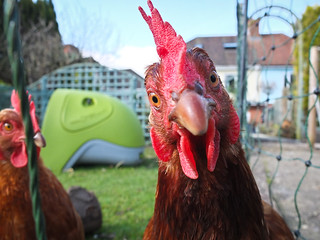 Although domestic, chickens do not make particularly affectionate housepets. (Source)