Kobieta-Literatura-Historia
Woman-Literature-History
Warsaw: Wydawnictwa IBL PAN, 2016.
Three key words […] woman, history, literature – create a very broad and capacious framework for the seventeen articles included in the book, which is divided into four thematic groups, or parts. […] part one provides an introduction to the issues and problematics of women’s view of history and of defining femininity “in it’s historical and national variants”, part two focuses on the female characters of literary works “concerned with historical events”, part three is devoted to Polish post-war woman-emigrants, and part four contains sketches, “connected to female literary accounts of important historical moments.” This composition – resembling a bricolage – has incontestable merit: it is a source of surprises […] Of unexpected […] proximities that can astonish but also inspire thought, all of which is, as a matter of fact, a characteristic feature of the majority of Bożena Karwowska’s articles and studies.– Prof. Ewa Kraskowska Druga płeć na wygnaniu. Doświadczenie migracyjne w opowieści powojennych pisarek polskich
Second Sex in Exile. Migration in Narratives by Polish Postwar Female Writers
Kraków: Universitas, 2013. 276 pages.
Reviews: Autobiografia, 1/2013; The Sarmatian Review, September 2014.
~ Nomination: the Jan Kochanowski Prize for the best book on Polish literature and culture published abroad in 2013.This book explores issues of postwar Polish migrations as portrayed in literary works by Polish emigre women writers and female authores who debuted after 1989. The author sees this new generation of writers as closely connected, both thematically and linguistically, with their exilic foremothers. It begins with a comprehensive introduction to the theme of exile and a discussion of the exilic experiences of a variety of writers, ranging from Czesław Miłosz to Eva Hoffman. A large part of this study encompasses, as pivotal themes, the phases of exile and the processes people undergo as their identities shift from being emigrants to being immigrants.The “domestic” sphere, whose prominence in the works in question can be at least partly explained by the fact that in Poland, for historical and political reasons, public and private spheres had acquired a different character than in the West, is yet another important theme. The blurring of the line separating these two spaces, as well as separating the personal lives from the narrative representations of reality are points of departure for the description and analysis of the roles taken up by the first generation of postwar emigre women as wives and mothers. The study of the image of Matka Polka (a patriotic mother) includes problems these mothers encountered in raising the next generation (as well as the one-and-a-half generation) in the context of the cultures and mores of their new countries.Another topic of the study covers a discussion of women authors as observers of their new countries (Great Britain, France, Argentina and the United States) and their inhabitants, including other emigre diasporas and visible minorities. Their views on social changes and on the beginnings of the feminist movement are largely shaped by their “domestic” patriotic perspective, typical of Polish women of their generation, and by the views on visible minorities as conditioned by the colonial roots of Polish culture. This study furthermore takes up an inquest into intergenerational and intercultural problems, as well as issues arising from the social class composition of exilic groups and diasporas, which, in literary works by emigre authors, translate into the authors’ descriptions of their places of arrival, and the cities these migrants inhabited. The final chapter examines the possibilites afforded to women to build intercultural connections through the nexuses of new media.In the course of consecutive chapters the author discusses, among others, works by Stefania Kossowska, Janina Kowalska, Eva Hoffman, Halszka Guilley Chmielowska, Janina Surynowa Wyczółkowska, Danuta Mostwinowa, Alicja Iwańska, Joanna Bator, Brygida Helbig, Inga Iwasiów and Olga Tokarczuk. Ciało. Sexualność. Obozy Załady.
Gender, Sexuality, Concentration Camps
Kraków: Universitas, 2009. 216 pages.
Reviews: The Sarmatian Review, January 2011; Res Publica Nowa, 25.06.2010; Ruch Literacki, vol.4-5, 2010; Nowe Ksiazki, 5/2010; Pogranicza” 3/2010; Pamiętnik Literacki, 4/2010.The book Body, Sexuality and Concentration Camps provides an attempt to discuss Polish literature of the Holocaust, with a particular focus on the first hand testimonies written immediately after the war, through the categories of feminist discourses, especially those approaches that recognize the ways in which even non-gender related persecutuions have an effect on genders and their cultural formations.Part one groups texts that introduce the theoretical angle of the study and explains basic categories used in feminist discourses, emplyed in this book. Chapters devoted to Stanisław Grzesiuk’s Pięc lat kacetu, Zofia Romanowiczowa’s Przejście przez Morze Czerwone and Seweryna Szmaglewska’s Dymy nad Birkenau discuss concepts that are crucial for the study: gender, body, sex and sexuality. The texts also include reflections on the relevance of using concepts and ideas from various feminist approaches: black American feminism, for instance, is not commonly used in studies of Holocaust literature.While discussing well known texts in an innovative way, the book also tests the relevance of various feminist and post-colonial approaches for studies concerned with the concentration camps, limitations of humanity, morality and ethics. Henceforth, the second part of the study tests the perspectives and notions discussed in part one. The category of position (and positioning) is discussed in connection with Maria Dąbrowska’s writings about widowhood and coming to terms with the death of her husband, Marian, in her Diary, and then Tadeusz Borowski’s stories about concentration camps written from teh point of view of a man in love. Though Dąbrowska’s text does not belong to the literature of the Holocaust, it illustrates the difficult process of searing out a linguistic form, suitable for expressing the experience of loss through death, which, despite war-related “desexualization” of the body, turned out to be closely connected with the body and sexuality. In turn, Borowski’s position as a man in love allows him to escape banality, while referring to high moral and spiritual values in his descriptions of Auschwitz. The third text in the second part introduces the notion o fthe palimpsest of the mind, applying it to “The Passenger”, Zofia Posmysz’s story of a former German SS woman, presented differently by various media – radio, theater, film, novel and opera.The third part of the book includes more general studies of topics and themes touched upon in several literary texts, though usually only marginally. Herein, the main focus centeres on the value of the degraded and captive body, in relation to prisoners’ retention of humanity, and their ability to resume (or re-construct) normal lives after the liberation. Issues touched upon in this part go beyond the concentration camps; thus, the chapters are devoted to such important questions as rebuilding lives in the post-war realm of antagonistic memories of neighboring nations and the gradual comingto terms with history. Such is exemplified here in the ways which German female characters have been used in Polish post-war literature, as wel as the symbolic unification of the mutilated, captive body through the (homosexual) act of dancing, and the (heterosexual) metaphor of dance, which, incidentally, connects the body to the “female” art of ballet. Though issues and question discussed in this part vary greatly, also including, of note, an analysis of the question of prostitution and brothels in concentration camps, they are united through feminist points of view and approaches in the respective studies. Questionsevoked by borderline situations in the camps are seen here as important for life after the war and for what is commonly referred to as “normal” and “everyday” life. The Critical Reception of Czesław Miłosz and Josif Brodsky in English-Speaking Countries.

The study describes and analyses the process of critical reception of Czeslaw Milosz and Joseph Brodsky in English-speaking countries. The approach of the first five chapters, while theoretically informed, is primarily narrative and descriptive. The first two chapters present the reception processes in their chronological development, focusing on the evolution of critical interest, categories of description and contextual factors and show that the reception of the two poets has been substantial and of considerable intrinsic interest. While contextual elements played a crucial role in the early stages of the reception, the text gradually became the main focus of critical interest. This development was, however, complicated by the problem of translation described in the fourth chapter. The study also shows that using a variety of techniques, examined in the third chapter, Milosz and Brodsky influenced the reception of their works. Outlined in the fifth chapter growing interest in the East European poetry, and connected with it descriptive formulas based on the experience of the poet, provided a significant literary context for the reception of Milosz and Brodsky and allowed to examine the rising interest in the text of their literary works. The analytical part examines the mediating role of translators and critics, treating them as an interpretive community. The analysis shows that the aesthetic response to literary works was based for years on the contexts. However, in the later stages artistic features of the text came more frequently to the critical attention and the literary text began to play a controlling role over the critical descriptions. Finally, in the conclusion, Fish’s concept of interpretive community and Jauss’s concept of horizon of expectations, the notions of the reader-response and reception theories used in the course of the study, are examined from the point of view of their heuristic value for the description and analysis of the actual process of reception. The conclusion also outlines some indication of combining them with the notions of aesthetics object (Mukarovsky), common memory (Lotman), semiotics of culture (Lotman and Uspensky) and Tomashevsky’ s view of the role of “the legend of the author”. 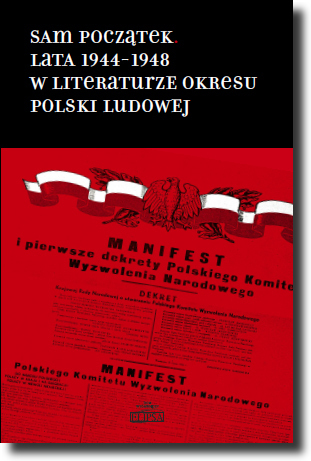 Sam Początek
Wydawnictwo Elipsa, Warszawa 2017
Edited by Hanna Gosk and Bożena Karwowska
Literature from the period of the Polish People’s Republic referring thematically to the first post-war years showed readers some aspects of sociopolitical reality, while other aspects remained invisible or were omitted, either due to censorship or because they did not fit the dominant mainstream interpretation of the phenomena and events from the years 1944-1948. 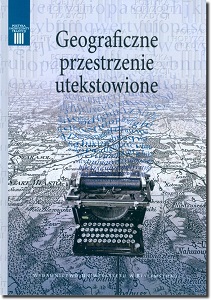 The More I know, The Less I Understand. Young Researchers Essays on Witnessing Auschwitz
Auschwitz Birkenau State Museum Publishing House, Oswiecim 2017.
eds. B.Karwowska, at al.
“Witnessing Auschwitz – Conflicting Stories and Memories” is an intensive research seminar developed by scholars from the University of British Columbia (UBC), the Auschwitz-Birkenau State Museum and the Emanuel Ringelblum Jewish Historical Institute. Each spring since 2014, a new group of students from UBC has travelled to Poland for a month of lectures and study tours on subjects pertaining to pre-war Jewish life and the Holocaust in Poland. Students spend two weeks at the Auschwitz-Birkenau State Museum, whee they work and study with the Museum’s historians, collections specialists, and members of its publishing house and education centre. They spend another two weeks studying in Warsaw, Kraków and Białystok. By the end of the program, students have developed research topics deeply rooted in the scholarship to which they have been exposed while in Poland. The essays in this volume are the result of this inspiring and important international scholarly and educational collaboration.The essays that you will find in this book are the result of a long journey. They have been written by undergraduate students who came to Poland from the University of British Columbia (Vancouver, Canada), as a part of the intensive research seminar Witnessing Auschwitz. Coming from various backgrounds, personal as well as academic, students invested an incredible amount of time and dedication into learning about the camp and the crime committed there. Each study in this volume is based on the unique interests of these young researchers and will highlight a particular aspect of history related to Auschwitz. The texts come with invaluable footnotes by experts in the field who accompanied our students with advice and support throughout their research. With “The More I know, The Less I Understand”, UBC students share with you their insights on the topics where they have focused their dedication and their intellect. The (Non)transparency of Normality: Pictures of Order and Organization in 20th and 21st c. Polish Literature