Detroit has become a living laboratory for studying the creation and decline of urban industrial cities. The scale of deterioration in Detroit far exceeds that of other declining urban areas.

When the population of cities swell infrastructure develops to accommodate their needs, and as that population shrinks the infrastructure remains, leaving a ghostly reminder of these demographic changes. Houses, schools, churches, streets remain but are abandoned. 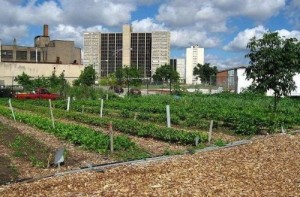 These abandoned spaces remain and as they deteriorate the land returns to what it was before the city developed. In downtown Detroit open fields have appeared amidst the remaining buildings… some of those spaces are being claimed as urban gardens.

One study that is chronicling the changes that Detroit continues to experience in this continuing story of urban change is Detroit Urbex. The intent is to “raise awareness of the social and economic challenges the city of Detroit faces through photography.” This is part of a movement called urban exploration or urbex, the exploration of man made structures, often involving exploration in places that are off-limits, and complete with suggestions for the kit for explorers (urban spelunking gear!).

Detroit Urbex’s photographic record is rich and deep, connecting the past and the present. 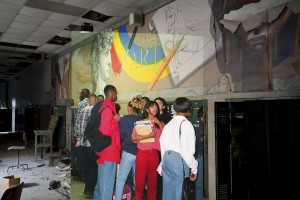 Now and Then is a kaleidoscope of past and present images that are remarkably poignant. These images from Cass Tech High School, the most prestigious Detroit High School ~ now demolished, illustrate this technique. 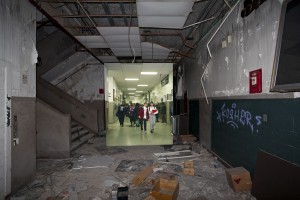