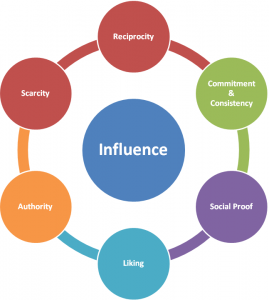 Once people establish a commitment, they are more likely to continue the transaction. When a Toyota salesperson grabbed a potential customer and explained the details of the car the customer is interested with, there is a high possibility that the customer will buy the car instead of looking to other places.

People like to be liked. Also, they are easily persuaded by the person they like compared to the person they are not familiar with. For example, companies use sales agents from within the community employ this principle.

People tend to obey to legitimacy. In, 1960s, a famous experiment called Milgram experiment was being conducted, showing that people are likely to obey to professional’s command even they feel bad for shocking other people. In real life, marketers often use professionals to prove the superiority of their products.

Scarcity generates extra value in the eyes of consumers. In other words, scarcity can generate instant demands. Marketers often use “Limited Time Only” to create a sense of scarcity in order to encourage customers to buy more.

People tend to do what they see the others are doing. For example, if a person sees everybody is using Apple product, it is very likely that the person will purchase an Apple product as well.

People tend to give return to somebody who has helped them before. For instance, you signed an insurance contract with a very good friend (an insurance agent) who helped you a lot before. 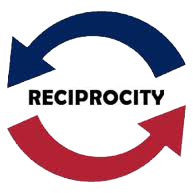 In a commercial, there could be 4-5 principles working together to promote sales.

3 thoughts on “7 Principles of Influence”