Canada as a country has the longest coastline of any country in the world by almost double the length. In the thousands of kilometers of marine ecosystem that this country is responsible for there are ten small National Marine Protected Areas (MPAs). While one recently added MPA includes the area surrounding the islands of Gwaii Haanas, none of these MPAs includes an ancient ecosystem located on the Pacific Coast of Canada, the glass sponge-reefs. 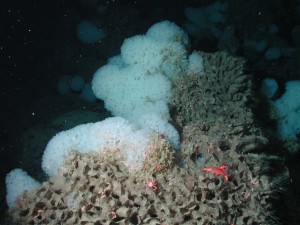 The Glass sponge in Hecate Strait is a siliceous marine invertebrate from the Class Hexactinellida that exists in colonies known as sponge-reefs. While glass sponges are found as far as Antarctica, the Canadian breed range from southern Vancouver Island to Hecate Strait east of the south side of Haida Gwaii. These colonies are found at depths from 140 to 240 m and can reach up to 21 m high and stretch for tens or hundreds of kilometers. However, the majority of colonies found off the west coast are very small pockets.

Scientists long thought these cold-water sponges were extinct, but in 1987, they were rediscovered off the coast of British Columbia. These “living fossils” so called as the base of these sponge reefs have been dated at approximately 9000 years old.  While these sponges were the foundation of a once rich, diverse and far reaching ecosystem off the coast of BC, they have been reduced to a few key areas. The growth rate in these sponges is very slow, ranging from 0—7 cm per year. Rockfish utilize the sponge-reefs as nursing grounds and marine biodiversity is generally rich in healthy reef areas.

Due to their silicate body structures, these deep seas sponge reefs are very fragile. Bottom trawling had significant adverse effects on these reefs previously and has been banned in specific areas since 2002. Moratoriums on the exploration of oil and gas have been in place since 1972, however Provincial and Federal levels of Government have indicated an interest in opening up the west coast to exploration. In addition, the vessel traffic is predicted to increase considerably up the west coast of BC. The physical (and potentially chemical) impacts of such activities could be detrimental to the health of the sponge-reefs in the vicinity of such activities.

The areas these sponge reefs occupy are far from protected at present. The Canadian Government has developed the Ocean Strategy, which is a strategic document outlining a path to realize international commitments which includes setting up MPAs to protect ocean biodiversity. These strategies have fallen short due to lack of funding and action on the part of the Federal Government. Currently, the areas containing the largest accumulation of sponge-reefs are Hecate Strait is on the Department of Fisheries and Oceans list of proposed MPAs. Non-government organizations actively attempting to build support for the protection of these areas include the Canadian Parks and Wildlife Society (CPAWS) (http://goo.gl/3KjCP7) and the David Suzuki Foundation (http://goo.gl/VLbU8s).