TD Bank Financial Group (TDBFG) is dedicated to diversity as proven by the inclusive environment they have built for both their employees and customer base regardless of gender, age, sexual orientation or disability. Since 2005, TDBFG has shown incremental support of the Lesbian, Gay, Bisexual, and Transgendered (LGBT) community via internal and external employee and customer pride events. TDBFG took a very daring stance by posting its own “It Gets Better” video, which featured their CEO, Ed Clark, in full support of LGBT teens who are dealing with their sexual orientation.

From a marketing perspective, advertising stances this powerful position companies on potentially dangerous and controversial ground. This “moral” tug of war has been a hot topic of debate, more so in light of the marriage right activism and backlashes taking place in the United States. I remember sitting at my desk as a Financial Advisor in a TD Canada Trust branch, being asked by customers as to why TD is a “gay lover”. While I disagreed with the closed minded perceptions of the customers wholeheartedly, I could not help but ask myself why a reputed bank would take such an astronomical risk? I sincerely believe that with all things business, business comes first. My first thought was whether the LGBT community was that large of a profit generator. Banks function on a relationship of trust and understanding with their customers, which can get very tricky when the entire nuclear makeup of a family is put in question. On a strict business level, targeting the LGBT community could result in incremental revenue streams but has a known down side which the Bank has been witness to: the loss of homophobic customers. The tightly knit LGBT communities across urban Canadian cities are dominated by successful individuals who would be assets as customers. However, there is a whole other set of clientele with “conventional” beliefs who would very much mind viewing online ads with a gay couple representing the bank who is financing their home, cars, retirement, and children’s education. So why the risk?

Typically, banks engage in non-controversial forms of marketing that are safe and mundane, with the goal of attracting a larger client base with an attractive service, or lower mortgage rates. As the time I spent with the institution grew, and the amount of backing I saw for Women in Leadership, fundraising, environmental involvement, etc. by the bank, it occurred to me: these campaigns were about what the Bank stands for, which is an all encompassing environment where every member of the community is welcome and supported. TDBFG’s mission is not a matter of whether their LGBT campaigns would or would not result in incremental revenue streams, but rather, about staying true to their core beliefs of inclusion and diversity.

After interviewing Judy Lundell (Internet Marketing Manager, TDCT), it was apparent that TD had consciously made a decision to utilize gay advertising material including the Youtube video that featured their CEO. TD’s LGBT ads are actually setting a precedent. Whether it was digital rainbow stripped ads on Facebook of a lesbian couple cuddling on a couch with a “Loud and proud to be your bank” caption, or gay men looking in love, walking down the street; the Bank clearly illustrated what their brand stands for. 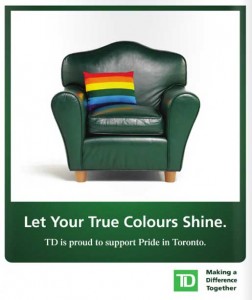 Their ads served as a reflection of their culture of inclusiveness, illustrated by their various PR activities such as sponsoring the Pride Parade. TD’s choice of using non-traditional couples in their ads did not necessarily target the LGBT community, but rather, clients and prospects that are supporters of diversity. From a marketing channel, we can view this as a great corporate move; while the bank may have lost customers, they also gained many who responded positivity to their progressiveness.  Other banks in Canada, let alone the United States, show subtle support of the LGBT community (and diversity in general), and none have ever taken a stance as bold as TD.

The fact is, controversy does create a buzz, and there is no such thing as bad publicity. Upsides and downsides will exist for both the short and long run. In the case of TD, there will certainly be a group of individuals, clients or prospects that would find gay friendly ads offensive and unacceptable. This could cause the bank to lose some existing customers in the short run. Further, the stance may create so much chatter that some groups may forget the product and service offerings that drew them as clients in the first place. These short-term losses are well countered by the long-term trajectories and shifts in public thinking. Social perceptions have greatly altered over the past few decades, and will most likely continue to do so as acceptance of diverse lifestyles becomes increasingly mainstream. We need only look back 50 years to see where women, gays, and ethnic/religious minorities stood to predict where they will stand in another 50 years. Therefore, this form of controversial marketing positions TD Bank as a progressive institution and will bode well for them from a profitability standpoint in the long run. They will be remembered as the industry leaders who supported diversity so outspokenly, securing them first mover advantage. Moreover, this form of online controversial marketing engages feedback in ways that print ads never can. The bank is easily able to measure how customers, employees and other stakeholders react to the brand’s core beliefs, facilitating open dialogue with the community via blogs, Twitter and Facebook. To this end, social media has assisted organizations in creating brand advocates, creating this so called buzz that could ultimately bring more people including family and friends into this “funnel” of acquiring customers. Increasing your customer base is no longer seen as a one way road; instead brands need to utilize social media tools to create a feedback loop which would ultimately influence customer and prospects decision making including controversial forms of internet marketing.

The key to success when utilizing controversial forms of internet marketing include: