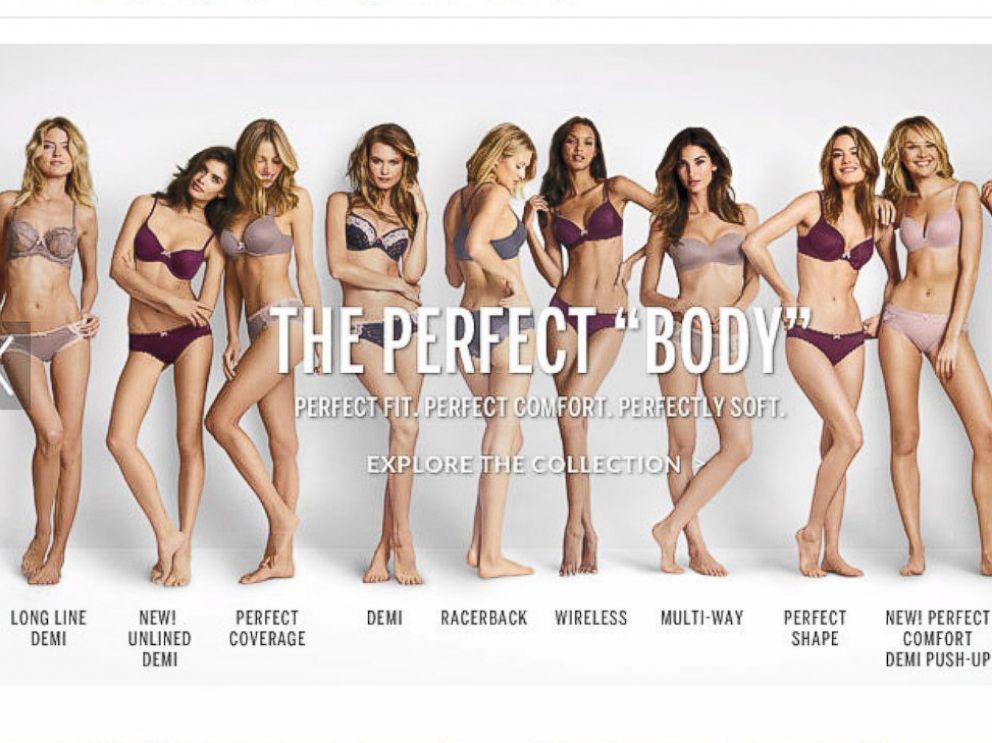 In 2014, Victoria;s Secret released this ad, advertising one their newer comfort lingerie lines. From the beginning, this ad generated a lot of social media attention and backlash due to the slogan and models used. It is widely known that Victoria’s Secret uses models that have to have a very specific look in order to represent the brand, but the slogan alongside the models is what sparked all the outrage. Victoria’s Secret released a statement saying that the word “body” is in quotations because that is the name of their new line. Unfortunately, the use of that word in their slogan, regardless of what it was meant to represent, was open to a lot of misinterpretation due to several factors.
There was a minimal amount of diversity in the models who were chosen to feature in this ad. The lack of women of colour and the lack of body diversity portrayed that in order to be considered as someone with a perfect body, you need to be tall, thin, young and preferably have lighter skin.

Although this ad was attempting to portray that their new lingerie line can be a perfect fit for every body, it did not succeed. Instead, it chose to portray very specific and idealized body types and label that body as perfect in reference to the way the lingerie would fit. Instead, that catch phrase excluded so many women who do not fit into what their standard of perfection is. Women come in all shapes and sizes and to portray very few body types while advertising what a perfect fit looks like is discriminating and devaluing all woman who do not fit into that mould.

Victoria’s Secret attempted to re-release this ad, through changing their slogan. Unfortunately at this point, the true image of their media campaign was understood, backlashed and criticized. Their new slogan, “A Body for Every Body” brought on the same criticisms as the first ad release because bodies of so many other women were excluded and yet they still chose to generalize and narrow down what a woman’s body should look like in their undergarments.

The jammed version of the ad ended up being much more minimalistic than I had anticipated. I chose to work on the very original ad that Victoria’s Secret released instead of their changed one. I made this decision because the first ad would have been the only ad if it wasn’t for the backlash.

The two key changes that I ended up making was the colour of the picture and the wording under the main slogan.

Changing the colour seems very simple, but the reason I chose to do it was because that was what spoke the loudest to me when I first looked at the ad. Victoria’s Secret was attempted at creating a diverse ad that included everyone, but they failed. Black and white represented how one sided their campaign was. They did include two women of colour in the ad, which should not be ignored, but the black and white was meant to bring the focus on the types of bodies that were chosen. Rather than being distracted by the colourful lingerie, I wanted to bring the focus back on who was being portrayed as perfect.

Another thing that I wanted to focus on was what was written under the slogan. Instead of changing the main message, I wanted to alter what was being said under it to bring focus to the flaws of this message. In the original ad,”Perfect fit. Perfect comfort. Perfectly soft” was written under. This was obviously in reference to their garments. I chose to blur that out and instead write, “Perfectly ignorant. Perfectly exclusionary. Perfectly privileged.” The reason I chose those words was to bring the focus back to the slogan and what it is actually portrayed to the rest of us who identify as women and do not fit into the VS model category. Women who are not perfectly thin, tall, young and pale are just a few that could feel affected by this ad. It is important that we do not forget the struggles of Trans women and disabled women and their need for representation and inclusion in the media as well.

Many people chose to fight back and not be silent anymore. Our duty as women is to support, love and encourage each other. By fighting back and making our voices heard, many learned that loving yourself no matter what you look like is okay. Other lingerie brands chose to take the concept of the Victoria’s Secret ad and turn it into something much more positive. These companies chose models who had bodies that were much more representative of what the average (but not all) woman looks like.