British Columbia’s Agricultural Land Reserve (ALR) is a provincial land use zone wherein agriculture is recognized as the priority use for approximately 4.6% of the land base of British Columbia, Canada. The ALR is often described as one of the best examples of agricultural land preservation in the world and is considered by many in the province as a pillar of regional food security.

In BC, only 5% of the land base is considered suitable for agriculture and 2.7% capable of growing a reasonable range of crops (lands ranked as class 1-4 by the Canadian Land Inventory). Prime agricultural lands (1.1% of provincial land base) are often located in narrow valleys near densely populated urban areas and subject to heavy competition with other development uses. Urban sprawl poses many challenges to agricultural land preservation and local food production in BC. It is estimated that in the early 1970s up to 6,000 hectares of farmland was annually lost to urban sprawl. Increasing public awareness of the threat of urban sprawl to scarce farmland directly led to creation of the ALR via the provincial Land Commission Act of 1973.

The ALR is administered by an independent tribunal called the Provincial Agricultural Land Commission (often abbreviated as the ALC). The mandate of the commission is to preserve agricultural land, to encourage farming on agricultural land in collaboration with other communities of interest, and to encourage local governments, first nations, the government and its agents to enable and accommodate farm use of agricultural land and uses compatible with agriculture in their plans, bylaws and policies. Despite the role of the central tribunal, the ALR is divided into six geographic “panel regions” wherein land management is influenced by many different local land policy regimes, biogeographical factors, and local political issues. These regions are:

As of September 2015, the ALR is also divided into two zones (see Figure 1). While agricultural use and preservation of agricultural land is prioritized in Zone 1, in Zone 2 the commission is also required to consider the following in descending order of priority economic, cultural and social values, regional and community planning objectives, other prescribed considerations. 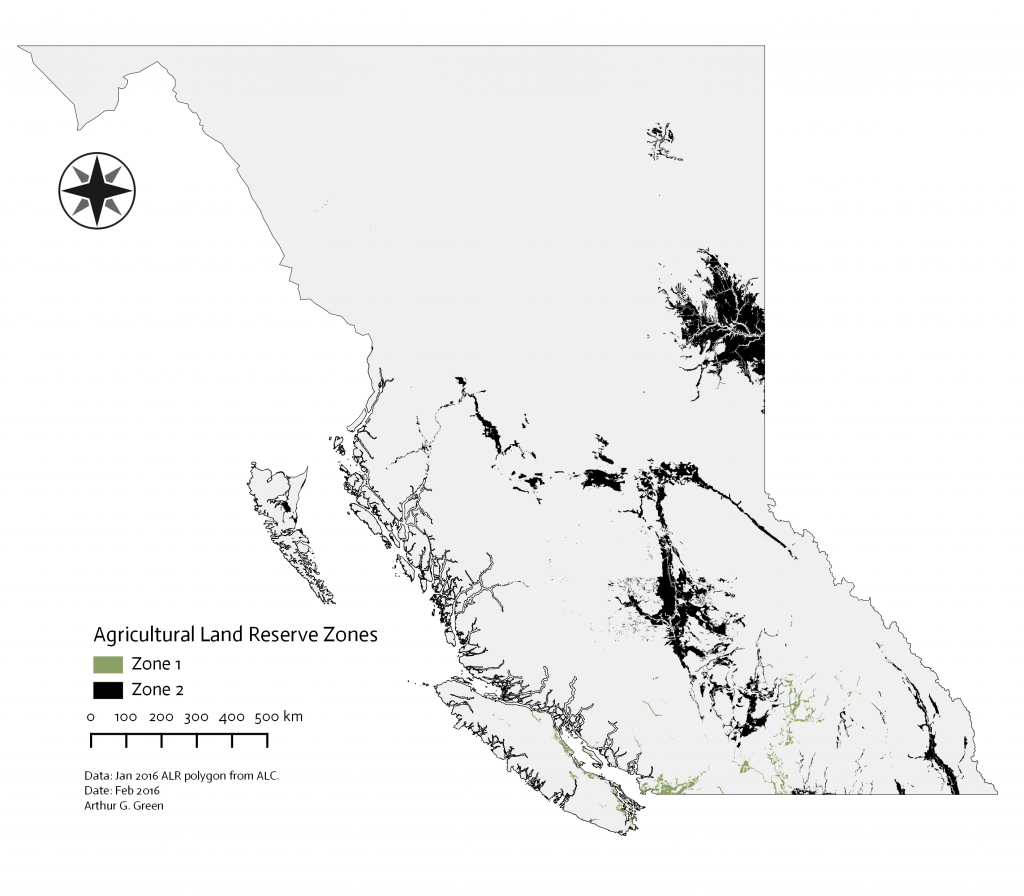 Political tension over the changes to the ALR governance (e.g. the 2015 implementation of Zone 1 and Zone 2) and to ALR boundaries has led to heated debate that often focuses on financial speculation on agricultural land, proposals to conduct non-farm uses on agricultural land, and the possibility of “exclusion” (removal) of properties from the ALR. See for examples of these debates the series of Globe and Mail cover the ALR in 2012, 2014, and 2014.

When natural resource management is subject to political debate, it is important to have accurate information about that natural resource to inform policy decisions and public understanding of the facts. Unfortunately, knowledge of the ALR is not at the level it needs to be for informed public debate. For example, despite 95% of survey participants supporting the ALR, this Ipsos Reid 2008 survey found that this support was based on a very low knowledge of ALR governance. Indeed, this low level of knowledge is also portrayed in the facts that are used to talk about the ALR in news media and politician statements as the amount of land in the ALR is commonly cited as 4,760,000 hectares (ha) though this number is not accurate. Use of GIS has allowed the ALC to perform boundary adjustments and led the ALC to provide a revised estimate of the amount of land in the ALR at 4,620,858 ha (as of March 2015). Calculations conducted on the 31 January 2016 version of the ALC official ALR polygons shapefile results in a total land area of 4,616,657 ha. It is troubling that despite the more accurate official revisions, many media outlets, politician, and political partisans continue to cite the much larger 4,760,000 ha. There is a difference of 143,343 ha (or 1433 square kilometers) between the commonly cited number (4,760,000 ha) and the Jan. 2016 calculation (4,616,657 ha) cited above.

Even more troubling is that the current revised estimate continues to includes areas that are not used as agricultural land within the ALR. For example, waters bodies, roads (of various types), forested areas, oil wells, farm buildings, and homes are not extracted from the estimate of arable farmland in the ALR. The 2014/2015 ALC Annual Report mentions that ALC GIS staff are working on an estimate of “ALR Usable Land” analysis yet these numbers are (as of February 2016) still not released to the public.

So, our class course project set out to answer the question, “How much agricultural land is actually left in the ALR?” In working to answer this question, we were also forced to discover and examine what open data source could be used by the public to conduct such an analysis. Student teams used a combination of open and proprietary data sets. In addition, staff set out to conduct the analysis (1) only with open data and (2) using a mix of open and proprietary data to see what the differences would be between the two types of data.

More information on the ALR and additional maps can be found on the following websites:

Much of above text was adapted from the below open textbook (CC-BY) which includes more detailed information and citations.

Recommended Citation for this webpage: