What did I do in this week:

I started my future trade on Wednesday. From the Maize Dec13 chart I found that the price of Maize Dec13 at that time was near the lowest point of the price range. Therefore, I bought 13 units of Maize Dec13 in total on Wednesday and Thursday as my first try. I thought that I would not lose lots of money even if it would not perform very well. Luckily, I earned about $800 after the US Market closed on Thursday. 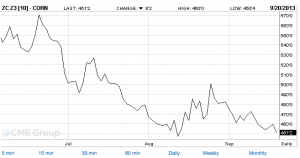 The commodity market is not a casino, so I did some research on Friday. According to USDA’s report “World Agricultural Supply and Demand Estimates” in September, the yield and quality of corn in this year will be higher than expected. As a result, the price trend of corn has been going down in the past few weeks. I hope that the price of corn future may rebound after it continuously declined in September. Then I can sell my corn future and short it. 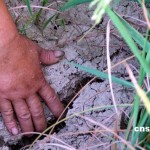 Here comes my tragedy. I read some news from Chinese website on Thursday evening. I found that the central and eastern regions of China have suffered serious drought and persistent high temperature. This has caused crop failure on around 900,000 hectares of farmland. These regions are the 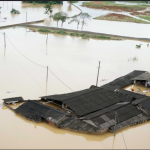 major areas of rice production in China. China may have the worst harvest of rice in the decade. Thus, more wheat will be needed as the substitution of rice. However, the major areas of the wheat production in China, the northeast of China, have been hit by flood. More than 787,000 hectares of farmland were damaged in these regions. The yield of wheat in China has decreased severely. All these reasons explain my expectation that the import of wheat in China will increase dramatically.

Therefore, I decided to buy 10 units Wheat Dec13 on Friday. However, when I did this, I made two stupid mistakes: first, I chose a wrong order type. I should choose limit for my order, but I chose market instead. Because I placed the order before I went to sleep, my bid price was the open market price of wheat future on Friday, which was the highest price of that day. (Feeling so sad…..) My second mistake is even more stupid. On Friday morning, I surprisingly found that the wheat future I bought is not the Wheat Dec13, but the Dec14. I accidentally chose the wrong year.

I also tried to short 3 units of Wheat Dec13 on Friday and covered it at the end of the day. Fortunately, I earned about $200 on this.

I did not buy soybean future this week, because it seems that the price of soybean is too high and it may fall a little bit in the coming days. Also, according to USDA’s “World Agricultural Supply and Demand Estimates”, soybean production in the US is projected at 3.149 billion bushels, down 106 million due to lower yield prospects. However, according to the forecast, the increasing production of soybean in Brazil and Paraguay will offset the decreasing production of Canada, the US, and China. I think that the short run trend of soybean future might be ambiguous.

Portfolio Summary of Week One:

The Lessons I leant from this week’s trading game:

First, doing research is the soul of the future trading. Secondly, I should check my orders more carefully before I confirm them. (I lost $6,250, which seems to be the tuition that I paid for my mistakes. Fortunately, it is not real money.)

Highlight Events of this Week:

The US Federal Reserve’s Press Conference

In the Wednesday afternoon, the Fed announced that they had decided to maintain bond-buying stimulus for the purpose of supporting the U.S. economy. After this announcement, the gold price spiked over 4% to $1,364.60 an ounce and the U.S. dollar fell to a 7-month low against major currencies. Dow, S&P 500 ended at record high: 15,676.94 and 1,725.52 respectively.

Syria agrees to submit the details of its chemical weapon to the OPCW arms watchdog at The Hague. To some degree, the Middle East tension eases. This progress put pressure on crude oil price to go down. The price of October crude oil future fell about 1.6% on Friday and the weekly loss is more than 3%: the price settled down to $104.67. The investors fear that the supply of crude oil will increase from the Middle East. 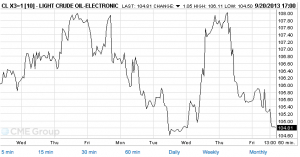 P.S. Crude oil functions as the benchmark of the commodity market. The decreasing of its price is probably one of the reasons to explain the price fall of the agriculture products on Friday.

The Calendar of Next Week (Bloomberg) 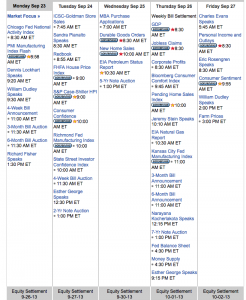 By the way, the future trade is very addictive. I hope that I can do better and be more patient in the next week.