As the game takes me on a cultural exchange trip to a faraway country of Kyrat located somewhere on the Himalayas, I find myself immersed in an abnormal and violent world in which mythical and modern elements simultaneously present. Such is the case of the fictional country of Kyrat. Kyrat resembles a typical country in the Global South: generally poor, no infrastructure, ruled by a dictatorship and a military government, challenged by anti-government insurgents. 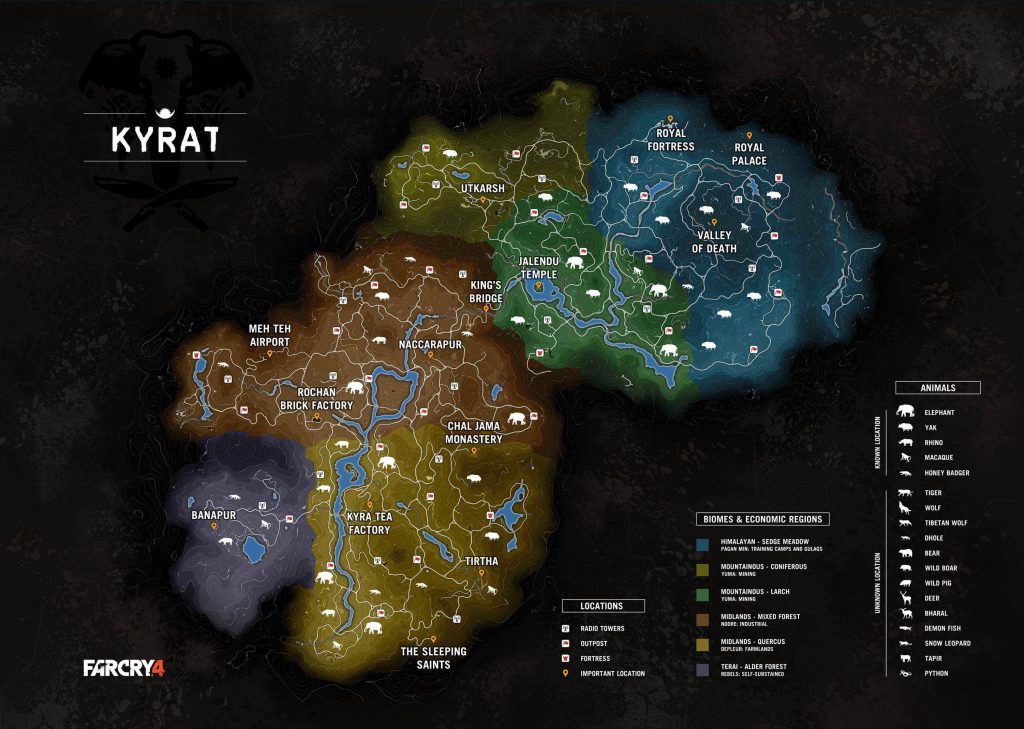 The fictional Kyrat has borderline with India and is located right under the Himalayas. Though Kyrat does not exist in real world, Kyrat represents a replica of India or Nepal. The in-game people speak Punjabi/Hindi or Nepali languages. When speaking English, they have an accent of someone from this South Asian region. The in-game music is obviously of Indian style, performed by popular Punjabi and Hindi singers. There are countless of other details, such as architecture, agriculture, landscape and cultural performance that emphasize the culture of South Asia. These minor factors give the players (including me) the feeling of actually being in that land while playing the game.

The story of Far Cry 4 is inspired by the Maoist Insurgency in Nepal (read more about Nepalese Civil War). Long story short: Kyrat is ruled under the ruthless dictatorship of Pagan Min and there is a rebel group called “Golden Path” that challenges to overthrow Min’s regime.

The protagonist (the player) is Ajay Ghale, a Kyrati-born American guy returning to Kyrat to scatter his mother’s ashes. Since his mother fled Kyrat to the United States two decades ago, Ajay has no knowledge of what is happening in the country. 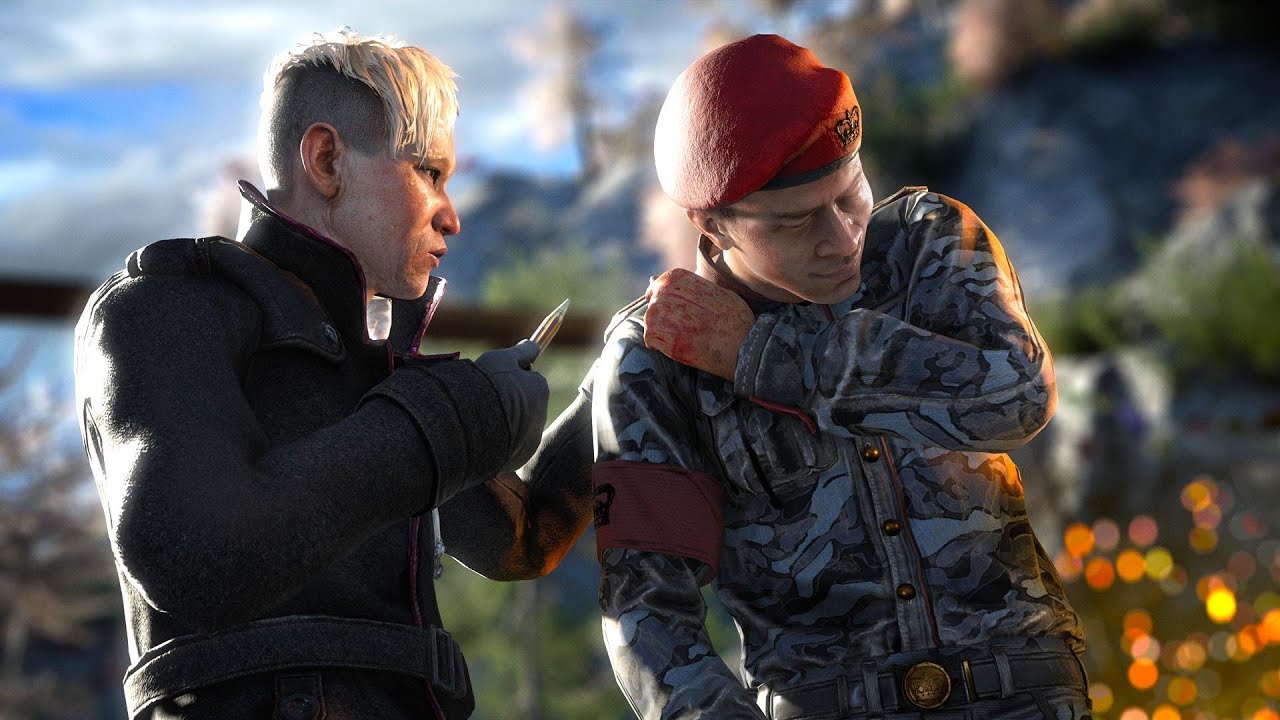 His bus is stopped at the border by Pagan Min’s border guards. Being confuse and worried, Ajay then witnesses a bloody shoot-out between some passengers on his bus (who happen to be Golden Path members) and the guards. In the aftermath, Pagan Min arrived on the scene from his helicopter, questioning the one of the guards for the cause of the shooting. Eventually, Pagan murder the guard with his pen (!), all of which are witnessed by Ajay. Seeing the violence and ruthlessness of Pagan Min, Ajay after being rescued by other Golden Path members decides to join the rebel group to overthrow the dictatorship and free Kyrat. However, the revolution is not straightforward but reveals a more complicated problem among the leaderships of Golden Path. More of which will be discussed below.

During his adventure, Ajay uncovers Kyrat’s untold history as well as his family’s. 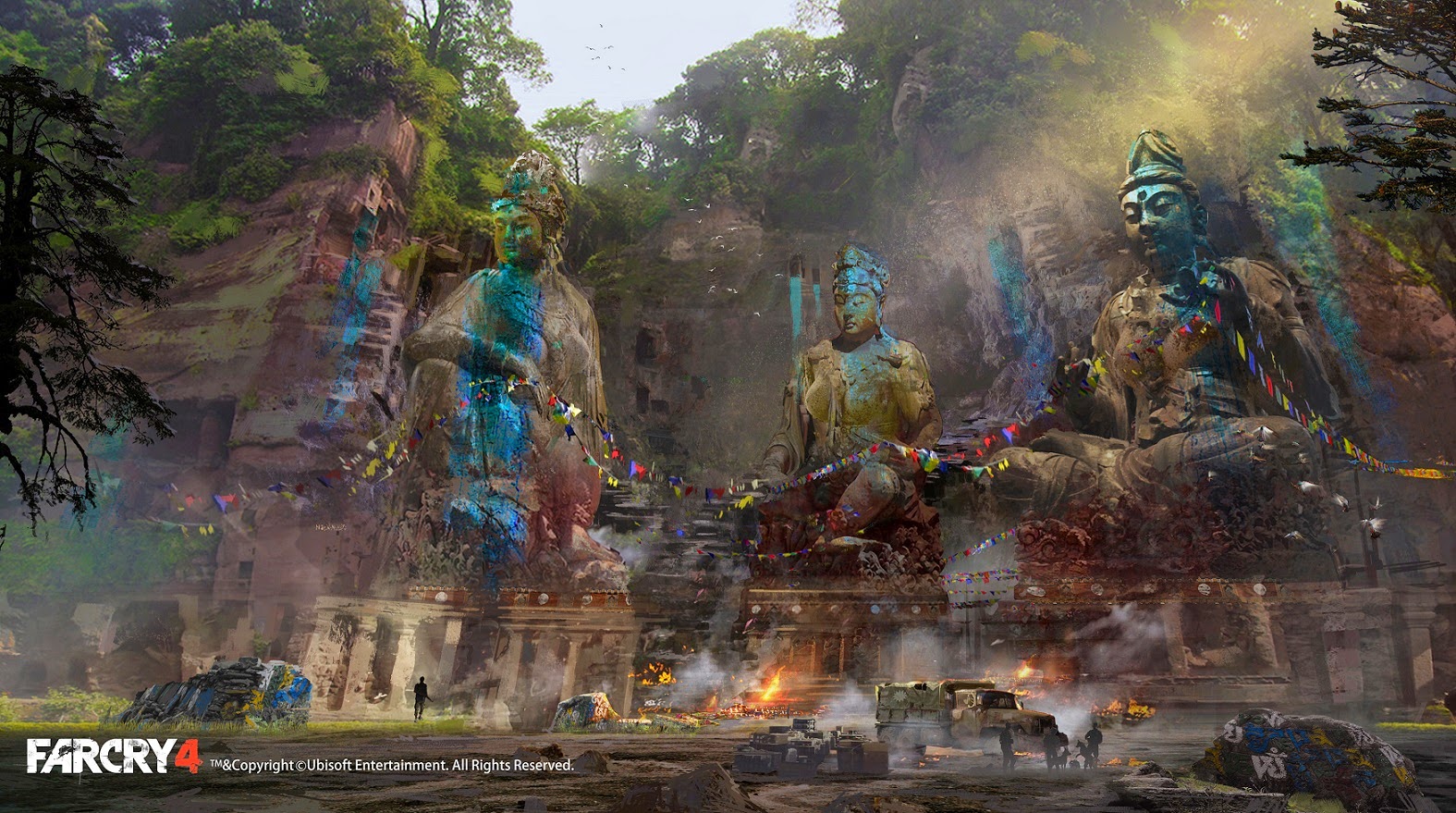 Fighting against oppression in Kyrat

The society of Kyrat is a replica of underdeveloped areas of India or Nepal. The people make ends meet by doing farm work, hunting, and fishing. They have certain cultural and religious customs that represent a mix of Hinduism and Buddhism. As they live in a mountainous area, there is no infrastructure like roads or traffics, not to mention buildings. Everything is underdeveloped and the only fancy things are fortresses left from the ancient time, used by Pagan Min’s Royal Army as symbols of his regime’s military might. Despite the lack of modern infrastructure, Kyrat has a lot of enormous Buddha statue (the ones that remind me of Tibetan Buddhism, not mainstream Buddhism – I may be wrong). The game developer, Ubisoft, successfully merged reality with fiction. Thus, a new Kyrat is constructed. It is the place where everything is made-up, yet it is so real that it reminds people of actually being in the under-developing regions of Nepal. Pagan Min is the main antagonist of the game. Originally from Hong Kong, son of a Golden Triangle drug lord, he came into power in Kyrat after overthrowing the pre-existed monarch. He installed himself as the king of Kyrat who is “our great and glorious leader who has risked his life and limb to bring Kyrat out of the past” (In-game Propaganda).

Pagan Min’s regime is a reference to the North Korean authoritarianism or China under Mao. With central power in Min’s hand and limited political freedom, Kyrat is more or less another North Korea (while it is a cultural replica of Nepal). There are military camps and military patrols everywhere while propaganda radio towers, propaganda posters, and propaganda centers play their role in reminding people of how great King Min is. Kyrat is already economically devastated, yet the people are also victims of the Army’s harassment, including killing, torturing, forced labor, and slavery. The military also acts as the police force in which they oversee opium production, slave trade, and prostitution.

You think there can’t be another country that is more corrupted than this. If there’s anything in this introduction lesson to political science, it would be: central power is bad!

Such condition in Kyrat paves a way for the Gold Path to grow and challenge the regime. 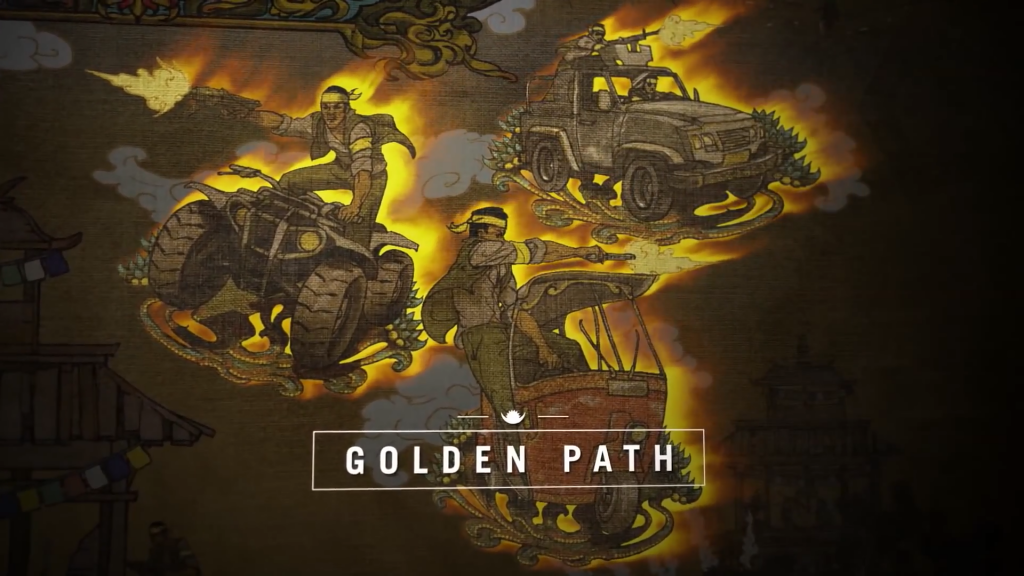 Golden Path is the name of the rebel group who stands against Min’s authoritarian regime. They are inspired by the Maoist Insurgency rebel group in Nepal (the Nepali civil war took place from 1996 to 2006). Their featured color is yellow, in contrast to Min’s Army red.

Before we jump into the conclusion that these freedom fighters are all for the good of the people and the country, we need to understand the divided leadership of the Golden Path as well as the two opposing leaders. 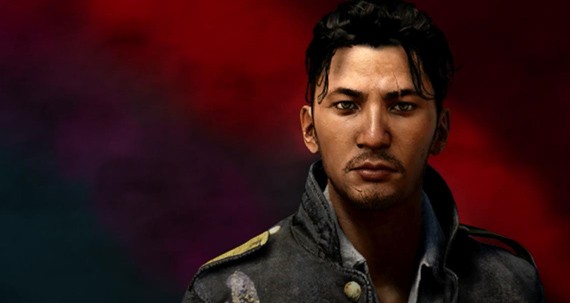 Sabal is all about tradition and the preservation of Kyrati culture. His belief is so strong that he always believes in some kind of Kyrat’s spirit that helps guide the Golden Path to victory.

As the story progresses, it turns out that Ajay’s (our protagonist) father is the founding members of the Golden Path, whom Sabal really admires. Because of that, Sabal believes Ajay returns to Kyrat in order to fulfill his father’s wish (despite the fact that Ajay has no knowledge of what is going on). Sabal always considers Ajay his right-hand man, calling him “brother”.

Sabal’s fighting tactics for the Golden Path is slow-but-sure. He focuses on defending rather than offending. He orders Ajay to destroy the Army’s opium fields and factory since they are “the opiates of the mass”. On the other hand, Sabal spends fighters and efforts on protecting major cultural heritage sites before the Army destroying or looting them.

His ruling policies tend to lead Kyrat to a state of absolute isolation in order to preserve its culture. 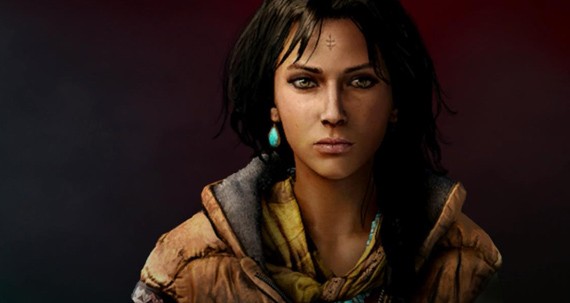 Amita is the other leader of the Golden Path. She is indeed the first and only woman who manages to climb to the leadership of this rebel group in such a conservative culture.

Amita is completely opposite to Sabal. She is a realist, militarist, anti-tradition and openly supporting opium trade for “a better future of Kyrat”. Her fighting tactics are more aggressive and more strategic than Sabal’s. She aims to strike swiftly and brutally, causing significant damage to the Royal Army despite heavy casualties. Her missions for Ajay involve destroying cultural heritage sites, protecting opium fields and opium factories, entirely distinct from Sabal’s approach.

In comparison to Sabal, Amita’s vision for Kyrat seems to be brighter: after defeating Pagan Min, Amita wants to expand the opium trade in order to exchange for material wealth for the people of Kyrat since the country has no infrastructure and natural resources to develop on its own. This approach displeases Sabal because such vision is not suitable with their tradition and custom. Because Amita and Sabal always argue with each other, there is an internal conflict in the Golden Path that gradually grows intense.

What makes Far Cry 4 interesting is that the story is not linear. As Ajay, the player can decide whether he should follow Sabal or Amita to progress the story line. Each decision leads to a different outcome. At a certain point in the story, when Ajay leans towards a particular leader, one mission will involve killing another leader, leaving the Golden Path in a unified leadership.

Choosing the Lesser of Two Evils If you are Ajay, knowing that Sabal is a close-minded religious man while Amita is a brutal militarist, who would you choose?

The game has multiple endings, depending on who Ajay chooses to kill.

If Ajay chooses to follow Sabal and kill Amita, in the end, one can see Sabal has many people, whom he condemns as “side with Amita, they choose to desecrate their own heritages and spit on the Gods”. He has them executed in public by cutting their throats. That is how Sabal deals with “crime committed against the Gods”. These killings remind us of the atrocity of the Islamic State.

On the other hand, if Ajay chooses to follow Amita’s path instead, things are not brighter as they seem. In the ending cutscene, the Golden Path soldiers forcefully take children away from their parents in order to incorporate them into the army because Amita wants more soldiers “to protect the opium fields, enforce the laws and keeping the workers in line” after the collapse of Pagan Min’s regime. Everyone is now technically a slave, all of which to serve Amita’s vision of new Kyrat without the backward tradition and custom.

Kyrat under Pagan Min: North Korea, with central power in the hand of a dictator.

Kyrat under Sabal: Pakistan, with brutal religion-based laws and preservation of local tradition.

Kyrat under Amita: Myanmar under military government along with the drug trade and forced labor.

Moral lesson: Sometimes, there is no clear righteous path to choose, no hero to follow. It is you (Ajay), yourself to step up to fight for what is right while no others can be trusted.

Next: The Mythology of Shangri-La in Far 4