The ecology of spider sociality – A Spatial Model

The emergence of animal societies offers unsolved problems for both evolutionary and ecological studies. Systems with a strong signal in their geographic distribution can shed light on the factors that favour or hinder group living. Based on 30+ years of research on the spider genus Anelosimus, we developed a spatially-explicit simulation model to test the hypothesis that gradients of increasing insect size and disturbance (strong rain, predators) with proximity to the lowland tropical rainforest are necessary and sufficient to explain why social species are concentrated in lowland tropical areas, whereas subsocial species, absent from these areas, are present at higher elevations and latitudes. The model recreated the observed patterns when both insect size and disturbance gradients were present. With small prey everywhere, on the other hand, social species disappeared from the grid, whereas when high disturbance was applied everywhere, higher elevations became empty as large colonies could not form in the absence of large prey, but small colonies were wiped out due to disturbance. The model thus supports the need for large insects for large social colonies to form and the importance of disturbance in creating conditions that require group living while tempering the dynamics of large social groups.

Biotic interactions along productivity gradients and mutualism on prey communities

Animals have a variety of strategies that protect them from predation; spiders are no exception. Spider antipredator adaptations may include spikes, antipredator colouration, or the construction of protective refuges. Spiders may build either more exposed two-dimensional webs, or more protected three-dimensional ones. As predation rate has been shown to decrease with elevation, here we explore how those adaptations change across a predation gradient. We hypothesize that as predation rate decreases, spiders will be less likely to have spikes, antipredator coloration, or refuges, especially in those of the more exposed 2D webs. We collected data on web and spider characteristics along the eastern slopes of the Ecuadorian Andes, from 200—4000 m in elevation. As elevation increased, 2D web builders, in particular, had fewer spikes and less antipredator colouration; refuges for both web geometries disappeared above 2500 m. By demonstrating how antipredator strategies change along a predation gradient, this study illustrates how the adaptive value of traits changes along with environmental conditions and selective pressures.

The energetic intake of web building spiders is determined by spider size, not web geometry

Web building spiders use traps composed of silk to capture insect prey.  Metabolic theory predicts organisms should need less food per-unit-mass as they increase in size. Spider webs, therefore, need not grow isometrically with spider size. It is unclear, however, how the allometric relationships between spiders, their webs, and the prey they capture, are affected by web geometry. We found that silk content per-unit-spider mass of orb, tangle, and sheet-and-tangle webs indeed declined as spider mass increased. Sheet-and-tangle webs, however, contained two orders of magnitude more silk than the two other web types. Prey capture surface area per-unit-spider mass, however, was constant as spider size increased in sheet-and-tangle webs –perhaps as a mechanism to recover the high cost of their webs– whereas it declined in both orb and tangle building spiders. As a result, prey biomass per hour per-unit-spider mass declined as spider mass increased with identical slopes and intercepts for all three web types. Our findings suggest that, despite striking differences in their web geometry, spiders build webs that are big enough to supply them the energy they need, and no bigger.

Habitat selection behaviours greatly influence organismal fitness because they determine the environmental pressures an organism is exposed to. Choosing an initial habitat is especially important for web-building spiders, which are uniquely sensitive to the physical structure of their environment. Spider webs can be separated into three categories based on their geometry: orb, tangle, and sheet-and-tangle. Since each web architecture is associated with a unique set of structural requirements, spiders with certain web types may favour environments with particular vegetation structure. While different habitat selection strategies have been observed in spiders with various web types, the factors that influence a spider’s choice in web-site location are still largely unknown. In this study, we aimed to determine how forest succession stage influences communities of web-building spiders in terms of the proportion of different web types. We investigated whether the proportion of different web geometries changes along a gradient of succession stages in Pacific Spirit Regional Park, in Vancouver, BC, Canada. We collected web and vegetation data across ten sites throughout the summer of 2020. Contrary to our predictions, we found that leaf size and seasonal phenology, but not succession stage, significantly influenced the proportional composition of the web-building spider community at PSRP.

The ecology of spider sociality

Based on 30+ years of research on social spiders, in particular those in the genus Anelosimus, I will address the question of why cooperative spider societies form and what explains their geographic distribution. I will show that two separate environmental gradients, one of insect size, the other of disturbance, in interaction with the spiders’ costly three dimensional webs, explain why and where social and subsocial species occur. I argue that group living and cooperation arise very generally as mechanisms to address environmental challenges that solitary species of particular characteristics cannot meet. 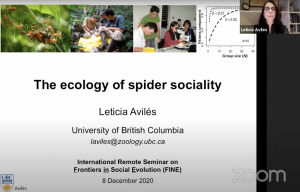