My love for sea turtles was sparked by Pixar’s Finding Nemo. There’s something about the way they swim through the water with a quizzical expression on their face that has always been mesmerizing to me. 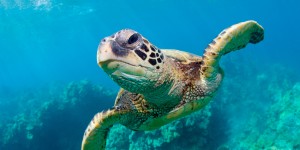 Unfortunately, sea turtles, along with other marine life, have been majorly affected by the 6.4 million tons of debris that enter our ocean annually (UNEP, 2005). It has been estimated that more than half of the world’s sea turtles have eaten some form of garbage – most commonly plastic (Feltman, 2015). Ingestion of garbage has been recorded in six of the seven sea turtle species (Schuyler, Hardesty, Wilcox, & Townsend, 2013). Devastatingly, all six of these species (Green, Olive Ridley, Kemp’s Ridley, Loggerhead, Leatherback, and Hawksbill) are registered between vulnerable and critically endangered according to the IUCN’s Red List of Threatened Species (2015).

A review paper by Schuyler et al. (2013) explained that most debris accumulates in convergence zones and oceanic gyres. Convergence zones are key feeding areas for many marine species including sea turtles (Wedemeyer-Strombel, Balazs, Johnson, Peterson, Wicksten, & Plotkin, 2015). As most turtles spend much of their life migrating long distances, it is extremely likely that they would encounter open ocean garbage at some point in their life especially while drifting in these oceanic gyres (Schuyler et al., 2013). 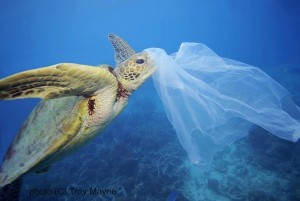 The consumption of garbage has devastating ramifications for sea turtles. Ingesting debris can cause the gastrointestinal tract of a turtle to become blocked or pierced (Schuyler et al., 2013; Wedemeyer-Strombel et al., 2015). Toxins often found in plastics can be absorbed by turtles causing wide spread development problems and reduces the ability to reproduce (Schuyler et al., 2013; Wedemeyer-Strombel et al., 2015). Leatherbacks and Olive Ridley turtles, whose diet mainly consist of jellyfish, have been seen to be at a higher risk of consuming debris as they could mistaken plastic bags as jellyfish (Sea Turtle Conservancy, 2015; Feltman, 2015). Most distressingly, eating plastic can make a turtle feel full for an extended period of time and cause them to starve to death (Feltman, 2015).

Schuyler et al. (2013) claim that the ingestion of garbage by sea turtles is an increasing worldwide problem. So what can we do about this tragedy? Because the majority of the issue has to do with the accumulation of debris in the open ocean, shore clean-up initiatives will not solve this directly; however, this is still an important step to take to ensure debris does not get into the ocean in the first place (Schuyler et al., 2013). Another way that this problem may be combatted is by refusing to use single use plastic bags at places like grocery stores. This could significantly reduce the amount of plastic bags that end up in the ocean. Industries should also ensure that their waste management practices are environmentally friendly. The protection of our ocean from garbage is so extremely crucial to the survival of our sea turtles. 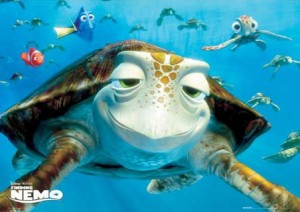 Information about sea turtles, their habitats and threats to their survival. (2015). Sea Turtle Conservancy. Retrieved from http://www.conserveturtles.org/seaturtleinformation.php

The IUCN Red List of Threatened Species. (2015). Retrieved from http://www.iucnredlist.org