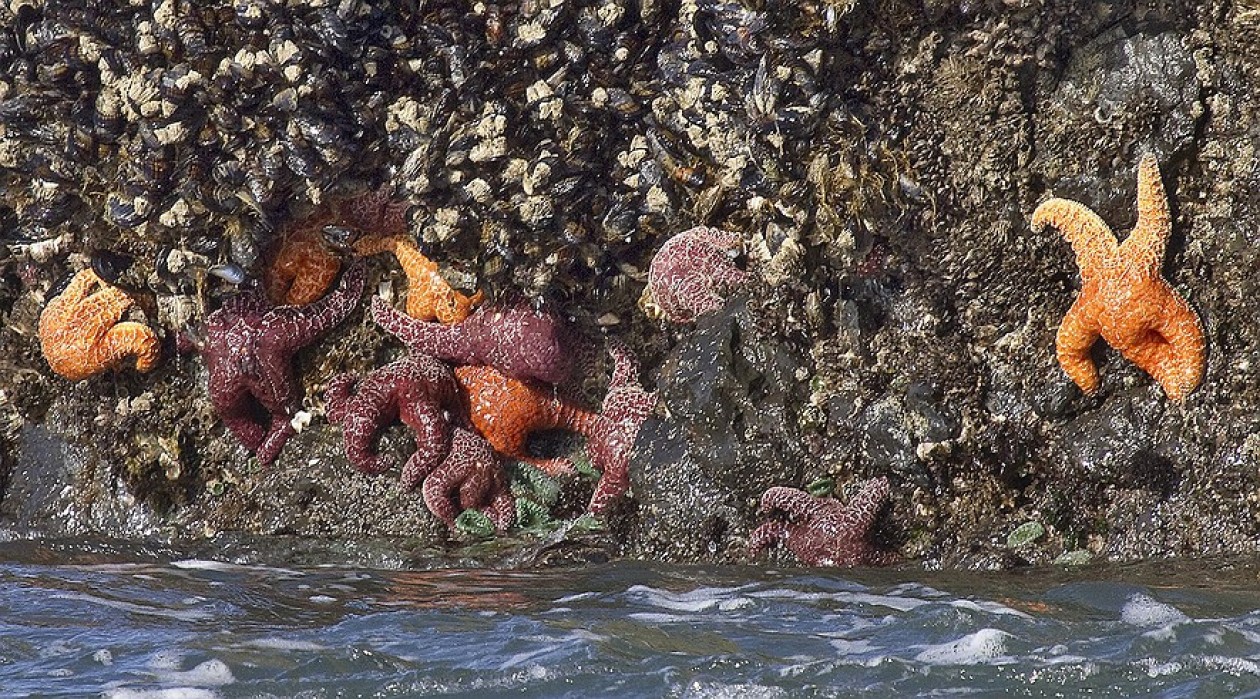 As a child, one of my favorite things to do at my cabin on the Gulf Islands of B.C. was to see who could find and count the most starfish, hiding between rocks or in the shorelines of the water. Recently, I decided to count the sea stars again, only my count ended up at zero. It all started in June 2013, when the first evidence of the sea star wasting syndrome appeared4. If someone were to ask you one of the worst ways to die, this would be a top contender. Signs of lesions are seen first, followed by tissue decay, and eventually limb fragmentation4. The disease killing them is caused by a virus named Sea-Star Associated Densovirus, or SSDaV, and has been monitored all along the west coast of North America in intertidal, subtidal, captivity, and sandy beach zones4.

Seastars are a “keystone species;” if you remove the species the whole ecosystem is effected6. As part of the intertidal and subtidal food chain, removal of the sea stars population has shown an increase in their favorite snacks, mussels and sea urchins. Such increases in the numbers of sea urchins can cause giant kelp forests, a home to many small animals and algae for invertebrates, to be destroyed3. Mussels are like that really athletic jock in high school who can out-compete everyone else until there is no one else to compete against. An abundance of mussels means a decrease in species richness in the rocky intertidal zones6.

Sure, it’s easy to blame a virus for the decline and death of sea stars on the west coast, but in isolation, the virus could not have done ALL of this damage. Bruce Menge, professor of interactive biology at Oregon State University said, “If [viruses] get in through damaged areas [of the sea star], what causes the damaged area? … If they don’t get in though damaged areas, how do they get in?”5. Warmer water due to climate change may be compounding the disease, as rising water temperatures puts the sea stars under stress and makes them more vulnerable to a pathogen1. As the ocean warms, more disease outbreaks are likely to occur, and with the warm El Niño year ahead, things may only get worse1.

Although this issue seems like one for the experts, there is a great deal that the general public can do. The University of California has spearheaded the public to track observations of juvenile and sickly looking sea stars (i.e. where the populations are re-establishing and where disease is occurring). An online guide tells you what stage of disease the sea star is in.

Check out this link for full identification guides: http://www.eeb.ucsc.edu/pacificrockyintertidal/data-products/sea-star-wasting/index.html.

There is hope though! One adult sea star can produce thousands of larvae, and the remaining individuals could potentially repopulate devastated areas2. In fact, 2014 saw the biggest year of sea star babies since 1992 in California’s tide pools2. So slay no more, evil densovirus, slay no more.