On June 23-24, 2022, the University of British Columbia Peter A. Allard School of Law hosted the third Canadian Law of Obligations conference on campus at UBC’s Green College. The theme of the conference was: The Power and Limits of Private Law.

A reflection on the conference is published on Slaw blog and the Allard Law blog.

The conference was held in honour of eminent Canadian obligations scholar, Dr. Lionel Smith, the Sir William C. Macdonald Professor of Law at McGill University, who was recently elected to the Downing Professorship of the Laws of England at the University of Cambridge, England.

The two days brought together around 45 participants as well as others who tuned in via the livestream of the proceedings. In addition to Professor Smith’s keynote address, the conference featured plenary addresses by Attorney-General of Canada David Lametti, retired Supreme Court of Canada justice Marshall Rothstein C.C. Q.C., and Allard alumna Angela Swan O.C. 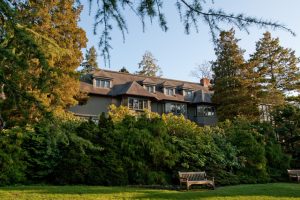 This conference was approved for CPD credit with the Law Society of British Columbia.

Collected papers from the conference will be published by LexisNexis Canada as a book entitled The Power & Limits of Private Law as well as a special edition journal volume of the Supreme Court Law Review.

The first Canadian Law of Obligations conference was held in May 2017 at the Peter A. Allard School of Law, UBC, with the theme of Innovations, Innovators, and the Next 20 Years. The event marked the retirement of Professor Joost Blom Q.C. and featured keynote addresses from Supreme Court of Canada Justice Russell Brown, Professor Bruce Feldthusen and Emeritus Professor Lewis Klar. The New Private Law Blog published a reflection on this conference and LexisNexis Canada published a collection of presented essays entitled The Canadian Law of Obligations: Private Law for the 21st Century and Beyond.

This conference was also supported in part by a Connection Grant from the Social Sciences and Humanities Research Council of Canada.

For further information about CLO III you may contact the Conference Hosts, Samuel Beswick and Marcus Moore.