Green crabs and ham? How a recreational fishery could help control a top 100 invasive species

Next time you visit a low tide at the beach, and you see lots of crabs scuttling about, I want you to think about an invader in their midst. One of the top 100 worst invasive alien species, according to the Global Invasive Species Database. 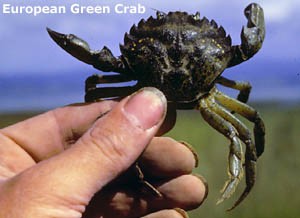 Photo of a green colour morph of the European green crab. Courtesy of wdfw.wa.gov. 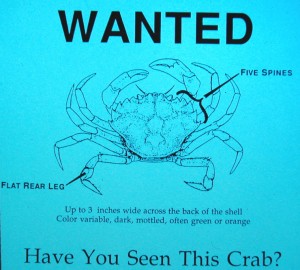 Poster used to help communities identify the invasive green crab from native ones. Courtesy of www.exoticsguide.org.

The European green crab has invaded areas including parts of the east coast of Canada and the US, as well as the west coast (3, 10, 13). Its native range includes Europe and parts of northern Africa (13). On the west coast it is thought introduction was via San Francisco in 1989 (6, 10). The crab larvae were carried north, reaching the west coast of Vancouver Island during the 1997/1998 El Nino event (10, 13, 15). The crab population is now expanding (5, 15) as expected with the introduction (6).

There is a predator among us

These critters have an aggressive nature, eating a wide range of species causing competition with native species (1, 3, 10, 11, 13). These green crabs cause ecological damage due to predation, exploiting the lack of predator response to the crab (1, 2, 3, 7, 9). Bivalve aquaculture has suffered economic loss due to predation (8, 13). These crabs are fast and aggressive feeders, able to out compete native predatory crabs (1, 7, 11, 13, 14). The farther the species spreads, the more predatory control is placed on populations and community structures.

Are we fighting back?

There have been minimal activities to control the crab on the west coast, while many ideas have been discussed on the east coast. Some include fencing, trapping, poisoning and commercial fisheries (4, 8). I believe that there needs to be more discussion in BC to gain action before this invasive species expands further. I believe that a recreational fishery on Vancouver Island could help solve this growing problem, with the help of proper legislation and public education. However, there are two sides to having a fishery:

Introducing a recreational fishery would bring about more discussion and action towards controlling this invasive crab. Maybe we will soon be eating green crab meat for a healthier coastal ecology!

This recent Nature Now podcast (10) covers more information about the impact of the European green crab on the west coast, helping gain much needed public awareness on this species. Take a listen!