Coral reefs are important for numerous reasons, most importantly, they provide protection and shelter for many different species of fish. Coral reefs are the cornerstone piece to many of the processes and interactions involved with both the ocean and species that inhabit it. Without coral reefs, these fish are left defenceless with nowhere to live and no where to reproduce and thrive (NOAA, 2015).

Contrary to popular belief, coral reefs are affected by both human processes in the ocean and on-land (Klein et al., 2012). Conservation efforts to protect coral reefs are focused strictly on the threats at sea, rather than the management that could be done on land (Klein et al., 2012). So as useful and successful marine protected areas (MPAs) may be, they may not be able to adequately protect marine ecosystems in places where land-based activities (e.g., forestry, pollution, etc.) negatively impact marine ecosystems (Boersma and Parrish 1999, Klein et al. 2010).

The three prominent examples of  land-sea connections important to marine resource management are:

(2) cross-system threats stemming from both human and ecological interactions (e.g., pollution and sedimentation from watersheds)

The aim of this study is to gain a better understanding of how pairing on and off shore conservation efforts can lead to a greater positive outcome. The articles cited address this gap and create a new integrated land-sea conservation approach that can be used to influence spatial management decisions, with a greater focus on forests and coral reefs (Klein et al., 2012). Their focus is to determine where the protection of forest can deliver the greatest return on investment for coral reef ecosystems. To address this aim, they demonstrate their approach in Fiji and show how it can be used to answer relevant questions to land-sea planning: (1) How and where does forest conservation reduce impact of nutrient and sediment runoff on coral reefs? and (2) If forests are protected for conservation, where are the priorities for coral reef conservation?

The first example is the focus of protecting coral reefs indirectly by monitoring and managing the coastal watersheds and mainland run-off. They estimated levels of pollution in each watershed by data gathered from information about land cover type, slope, soil characteristics, precipitation, dams, and mangroves to predict the amount of pollution produced by each watershed (Klein et al., 2012). 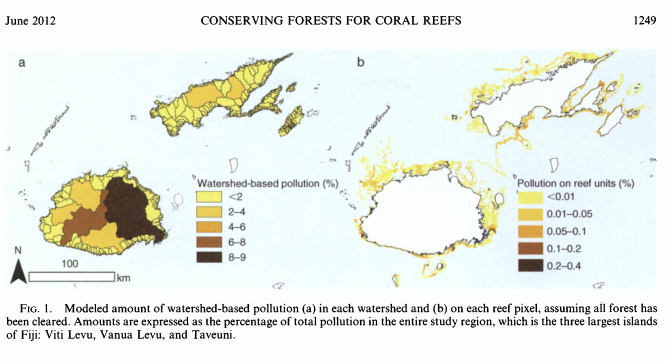 The second example is implementing protection for coastal forests and mangroves. Both these woody habits prove to be invaluable to coral reef and their conditions. Coral reef and mangrove ecosystems function in a symbiotic relationship, which enhances coastal environments (mangrove.org, 2015). The health and extent of coral reefs are largely dependent on coastal mangrove forests, which stabilize shorelines, remove pollutants, improve water quality, and provide nursery habitat that maintain fisheries. If fisheries are degraded due to the destruction or loss of mangrove habitat, then coral reefs will be adversely affected (mangrove.org, 2015). 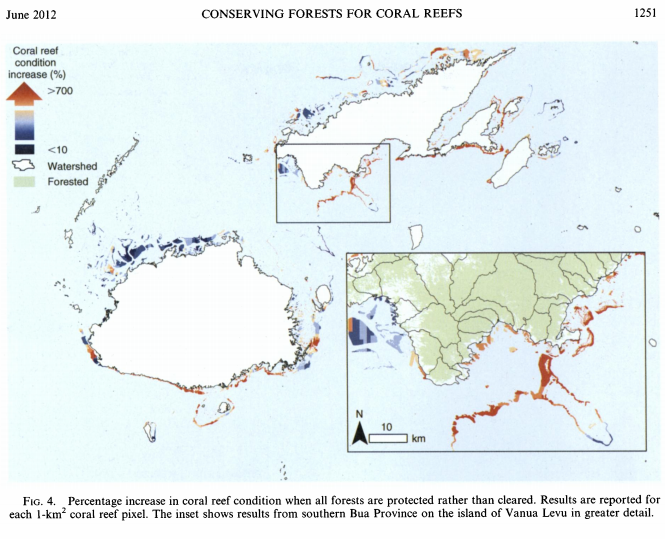 How do coral reefs protect lives and property? (2015). http://oceanservice.noaa.gov/facts/coral_protect.html