The connection between animal agriculture and the proliferation of oceanic dead zones is worrisomely strong – but often goes unnoticed.

In the ongoing fight for global sustainability, there is a silent killer amongst us. For too long the disastrous effects of this industry have gone under-reported and under-valued among environmentalists. The culprit is animal agriculture, and the statistics are damning. According to a report in The Independent, terrestrial animal agriculture and its byproducts are responsible for 51% of all greenhouse gas (GHG) emissions. Additionally, multiple independent organizations have singled out animal agriculture as the leading cause of species extinction, water pollution and habitat destruction. And, most significantly for those who care for the health of our oceans, animal agriculture is the leading cause of ocean dead zones. 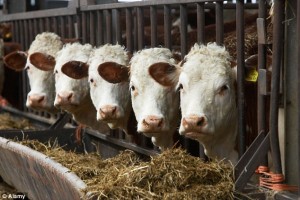 Animal agriculture is the leading cause of ocean dead zones

What is an ocean dead zone? When excess nutrients run off from livestock farms or the vegetation farms that are used to feed animals they inevitably enter a waterway, and often that waterway is or leads to the ocean. In a process known as eutrophication, the nitrogen- and phosphorus-rich run off causes an algal bloom in the water. As this algal bloom dies off, it is decomposed by bacteria which use up most of the oxygen in the water during the decomposition process. The result is large sections of the ocean being low in oxygen and unable to support life. Marine organisms either vacate the oxygen poor waters or die from lack of oxygen.

The Louisiana Universities Marine Consortium recently issued a report stating that terrestrial livestock operations have led to more than 500 oceanic dead zones around the world. The largest of these is located in the Gulf of Mexico, which spanned 13 084 square kilometers in 2014. This dead zone is largely caused by nutrient-rich run off stemming from the Mississippi River. Other large dead zones caused by agricultural activity lie off the coasts of Virginia and Oregon. 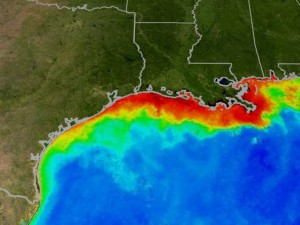 Ocean dead zone in the Gulf of Mexico

The primary source of eutrophication leading to dead zones from animal agriculture is improper disposal of manure. The Environmental Protection Agency estimates this amount to be 335 million tons of fecal matter measured in dry weight. In addition, fertilizer run off from crops grown as livestock fodder, notably corn and soy, contribute significantly to ocean dead zones. Terrestrial aquaculture is not alone to blame; many aquaculture operations also release nutrient-rich effluent that contributes to the proliferation of dead zones in the ocean. 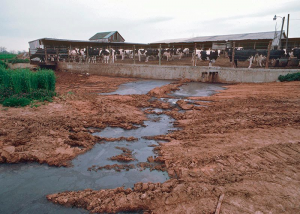 Much of the waste produced by agriculture enters water ways untreated.

Given the aforementioned gloomy situation its natural to wonder what we as concerned citizens of the world can do for this issue. One of the positive things about animal agriculture being responsible for ocean dead zones is that it is, in principle, easy to stop. To transform the world’s electrical grid into clean energy takes years of investment and tens of trillions of dollars. As consumers of meat and dairy we have the power to shut down these industries virtually immediately by changing our dietary habits. Unlike larger problems such as climate change, dead zones are readily reversible and if we reduced our consumption of meat and dairy we would see drastic improvements in dead zones within a relatively short period of time. One of the defining questions of our generation will be whether we rise to the challenge of a truly sustainable global society. Targeting the meat and dairy industries is a good place to start.