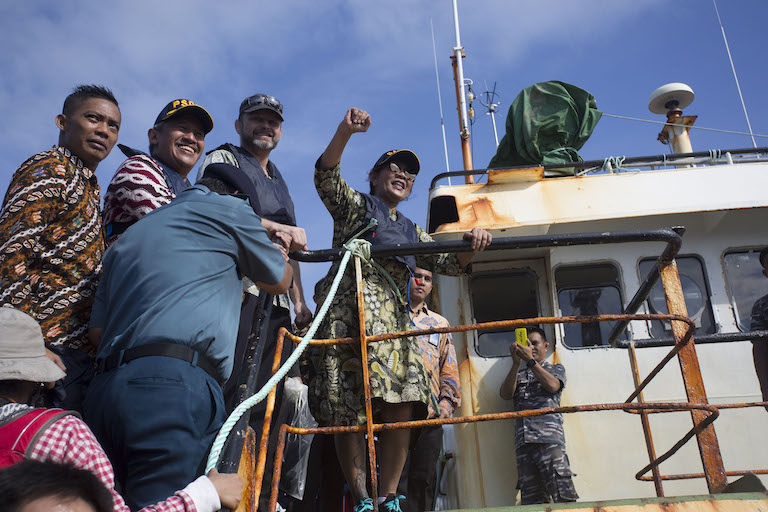 A victory at sea – Susi Pudjiastuti, Indonesia’s fisheries minister, celebrates on board a foreign vessel before sinking it. Image by Gary Stokes/Sea Shepherd Global.

It is no secret to marine conservationists that the largest threat to the ocean ecosystems is overfishing. Approximately ninety percent of global fish stocks are over-exploited or at their exploitation limit, leading to changes in fish ecosystem community structures and population collapses (Mehta, 2019).

As NGOs, international stakeholders, and national governments have learned about the adverse effects of overfishing on the environment and their own economic futures, the Agreement on Port State Measures was formed to combat one of the leading drivers of exploitations – Illegal, Unreported, and Unregulated fishing, otherwise known as IUU fishing (Christopher, 2019).

(The PMSA is a living document being continuously updated with information about how each country is participating in the effort – check it out for yourself here. )

Indonesia, a signatory to the PMSA since 2009 (Christopher, 2019), has historically  particular issues with IUU fishing in national waters. Before 2014, the island chain nation lost an estimated $4 billion to illegal fishing ventures, primarily from foreign fishing vessels (Gokkon, 2018a). In the past, many ships would fly “flags of convenience”, meaning they would fly Indonesian flags to take advantage of lax fishing regulations in the region (Governement of Canada, 2009).

In order to gain back control of their national waters, Indonesia implemented tough measures. In 2014, they outright banned foreign fishing vessels in their waters along with passing other restrictions on fishing – and when they caught any ship breaking those rules, the ships are seized, and sunk (Gokkon, 2018a). Since beginning that zero-tolerance policy, foreign fishing activity had dropped to just 10 percent of previous numbers, decreasing overall fishing rates in the region significantly (Cabral et al., 2018). 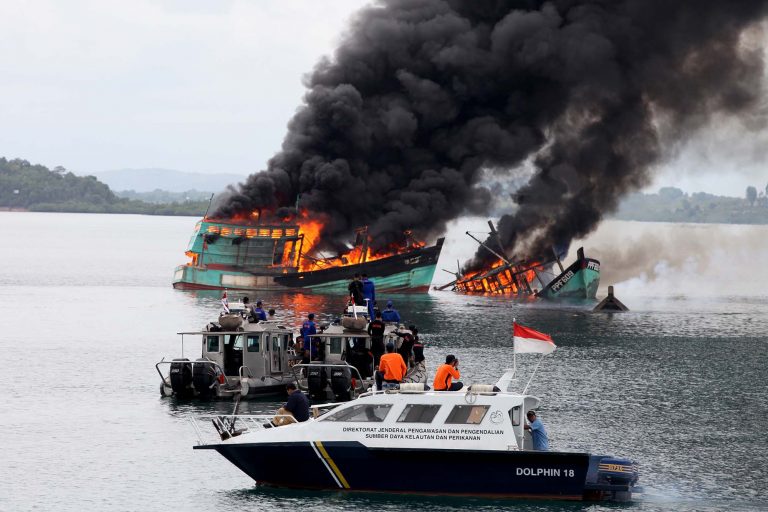 Sinking an illegal fishing vessel in Indonesia’s Exclusive Economic Zone as part of their tough stance on IUU fishing. Image from the Ministry of Maritime Affairs and Fisheries.

While this is definitely a success story, not all is perfect in the region. The current system of enforcement primarily punishes the crew members and fishermen on the vessels, but the owners get away scot-free. No consequences means these offshore owners are free to send ship after ship into Indonesian waters, since they aren’t directly affected (Gokkon, 2018b). The owners hide behind multiple shell organizations and change the names of the ships and the owners, making it difficult to impossible for the Indonesian government to target and take down the worst offenders (Gokkon, 2019).

Currently, the fisheries minister of Indonesia is lobbying to have IUU fishing included in the United Nations Convention against Transnational Organized Crime (Gokken, 2019). Only time will tell if they are successful, but until then, the success so far in Indonesia should be an inspiration to every nation struggling with IUU fishing.

Gokkon, B. (2018a, April 23). Indonesia’s crackdown on illegal fishing is paying off, study finds. Retrieved February 13, 2019, from https://news.mongabay.com/2018/04/indonesias-crackdown-on-illegal-fishing-is-paying-off-study-finds/

Mehta, A. (2019, January 22). ‘Over-fishing a worse threat to oceans than climate change’’.’ Retrieved February 13, 2019, from http://www.ethicalcorp.com/over-fishing-worse-threat-oceans-climate-change