I loved watching this video! The physical strength, confidence, and grit of these women is very cool.

Something that I found to be beautiful is how the cholita wrestlers find so much purpose and strength in what they do. Many of them speak about how empowering being in the ring is. Marta la Alteña (Jenny) talks about how she believes every woman has a lot of strength and bravery within her but that for some it is hard to exhibit to others. Jenny’s way of demonstrating her worth and bravery is by wrestling – like the other cholitas featured in the documentary.

When I initially heard this, I very briefly thought to myself “Oh well that’s a bit sad and kind of pathetic…” but I then quickly realize that everyone, from cholita wrestlers to doctors to bus drivers, strives to find a way to demonstrate their worth within society. When I began to compare these female wrestlers to male wrestlers, I realized that the same initial thought didn’t cross my mind when I thought about them even though many male wrestlers give the same reasons for fighting: they have a passion for the sport and feel that they are brave or strong enough to win. This was interesting to reflect on as it made me realize that part of why the cholitas are so impactful: they challenge our predisposed ideas about women’s roles in society and the abilities they should have.

Another beautiful thing about these women is how proud they are of their cultures and independence as women. By wearing traditional skirts, cloths, and hats, they are able to exhibit their Indigenous culture with strength and pride. By literally fighting in traditional skirts, the cholitas are able to demonstrate to others, but most importantly their own people, how cholita women are a force to be reckoned with. When listening to the stories of these women, it is clear that they have experienced far more difficult challenges in life than knocking down an opponent in the ring. Ranging from racial discrimination to raising children as single mothers, these women are the embodiment of female resilience.

When I was doing some extra Googling on this topic, I found a nice article with photos that highlight the rise of cholita leaders and figures within Bolivian society. Ranging from radio show hosts to congresswomen, the photos included show how cholitas have fought against racial discrimination and misogyny within Bolivia.

The article is definitely worth a look!  https://www.theguardian.com/world/gallery/2018/feb/22/rise-bolivia-indigenous-cholitas-in-pictures

Here’s my favourite photo from the bunch: 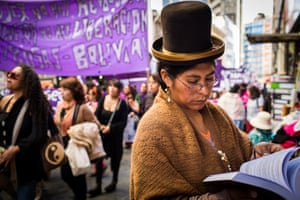 Discussion question: Why do you think wrestling was the sport of choice for the cholita fighters? Was it just an opportunity or might there be another reason for the choice?

One Reply to “The Fighting Cholitas”

** As part of my blog, I post a different Latin American song every week that is usually related to our class content! 🙂 Enjoy! **