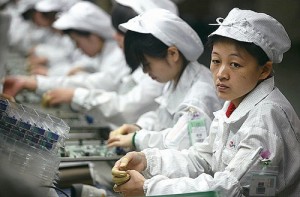 Foxconn is a multinational electronics manufacturing company that originated in Taiwan. The company has large global contributions to their field of specialization, the world’s largest manufacturer of electronic components, creating components to major products such as iPad, iPhone, iPod, PlayStation 3,and Xbox 360. The company is infamous for the series of suicides due to poor working conditions, worker abuse, and seemingly everlasting hours while obtaining low wages. This is such a serious problem that they have internal suicide-preventing counseling.
I believe that this company not only creates moral ethical problems relating to business, it also violates human rights. This is a authentic example of “the poor remains poor, while the rich gets richer” This company have been under investigation but due to low working regulations and high unemployment rates in China, it is difficult to avoid selfish companies from abusing the labor market. I believe that this issue must be fixed by the government itself, external organizations that attempt to help will not alter the system because there are many unemployed people that are willing to replace workers.