I was born in Iran, Isfahan. A city that is famous for being the beating heart of Iranian art from centuries ago. At the age of eleven, I took up painting as a pastime without focusing on any particular style. When I was fourteen painting became my greatest passion. I started learning academic principles and methods of drawing and painting at private classes during high school. Later on, I studied impressionism with Mohammad Reza Atashzad, a well renowned watercolor painter. After four wonderful years, this inclination towards impressionism was then replaced by a passion for modern art. I started learning principles of modern painting and I created expressionist and cubist artwork at private classes held by Mahmud Samandarian. Then I took classes with Gholamhosssein Nami, one of the leaders of Iranian modern painting. I began experimenting with mixed media and exploring the fascinating world of abstract painting. My art was deeply influenced by this era that took four years.

I also studied literature and calligraphy for years. I used to write poems, I still do occasionally. In my artwork I often make use of handwriting, mostly I write poems eithr by famous poets or any spontaneous poems from my own, anything that describes the moment and the feeling that I want to express. Many of my paintings was inspired  by The Fish, a poem by Ahmad Shamlou. I called them “Mirror Pond Collection”. Following is an excerpt of the poem:

oh runaway fish in the ponds of slippery mirror within mirror!

I am a clear lagoon;

now through the enchantment of love,

find a path from the mirror-ponds to me!”

Since after, I became extremely keen in collage. I deeply believe that collage is one of the most creative forms and techniques in modern art: using pre-existing materials or objects to create something else, in most cases something totally different. I have created collages of Persian music instruments inspired by Pablo Picasso and Georges Braque cubist colleagues.

Currently, I am interested in using materials that has been less used in collage. In 2009, I started experimenting with knitting material. My inspiration was my beloved grandmother who used to weave and knit for us with so much love and passion. These artwork got into a juried exhibition in 2010.

Some of my older Paintings: 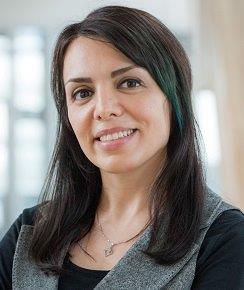