Picture this: you’re holding a fishing rod and all of the sudden you feel a gentle tug on your line. You pull. In this moment, you’re probably hoping you’ve got a good catch. Something BIG. After all, no one hopes to score a small fish.

This selectivity in fishing has been in our nature since the invention of the act itself. If we have a choice as to what fish to catch, almost anyone would choose the bigger fish. However, it doesn’t only benefit the ego or the dinner plate, but this selective size approach is widely used by fisheries management.

Our Pick of the Litter

Commercial and recreational fishing restrictions often target fish of minimum size. This approach aims to protect smaller individuals of the stock, which generally includes juveniles. The goal is to allow these young fish to live long enough to reach reproductive maturity, produce offspring, and allow the stock to replenish itself. So the next time we go fishing, there will more new fish to fish – seemingly a great idea!

The drawback is that by removing the majority of larger fish from a population, we’re likely altering the population’s genetic pool and ultimately selecting for small-sized fish. Fish are like people, not every one is the same size. If all the large fish are caught, then only juveniles and small-sized adults remain. These smaller fish then go on to reproduce and pass on their genes onto their offspring. 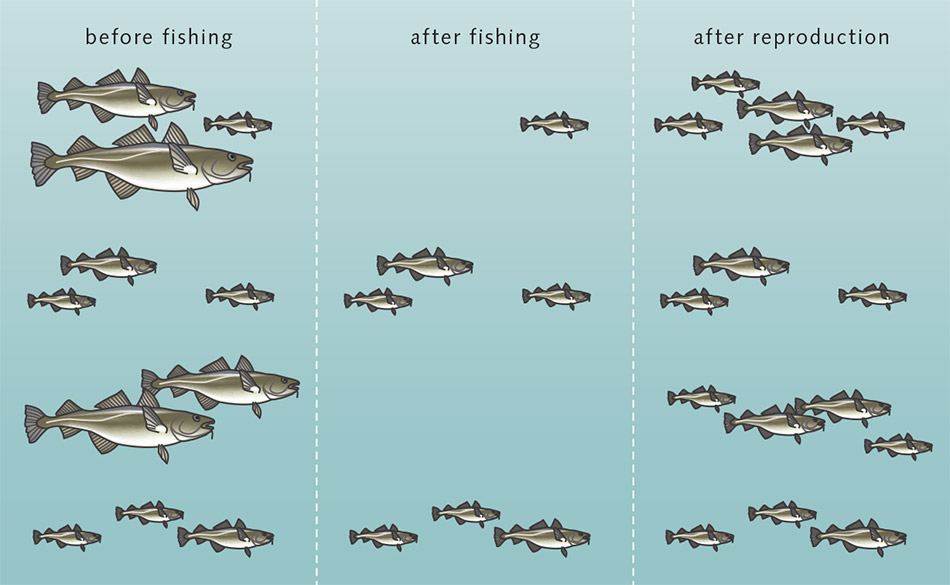 Here we thought we may be protecting our fish stocks by only catching certain fish but we end up with two problems contributing to ecological and economic decline. First is the artificial selection for small-sized fish. Second, fewer tonnes of fish biomass us to catch.

Is Fishing More a Possible Solution?

A relatively novel management tactic, called Balanced Harvesting, focuses on capturing fish across a wide range of sizes, species, and stocks in order to “balance” the natural productivity of the ecosystem at hand. In theory, taking a little bit of every size will reduce selective pressures leaving the proportions of the fish sizes just as it was. When modelled, this approach shows promising results: higher fish catch, improved marine ecosystem health, and maintained biodiversity.

“Understanding selectivity at all levels and adjusting it would be a key component of [Balanced Harvesting] management strategies” – Breen et al., 2016

On the contrary, real-world implementation of balanced harvesting is easier said than done. Some have mistakenly confused this approach to mean the elimination of size class restrictions allowing fishers to roam the sea and catch anything that bites. However, balanced harvesting may require even more stringent selective restrictions, only this time focused on entire ecosystems rather than single stocks. Besides the difficulties of implementation, this approach is likely to be much more costly and may require a shift in consumer behaviour toward the less exploited, and often less desirable, species. Overall, balanced harvesting carries a handful of concerns but the forecasted benefits make it worth exploring this management approach.