The Gold Coast, a coastline in Queensland, Australia and mecca for surfers around the world, has just become the latest World Surfing Reserve.  Announced just yesterday, this marks a major social achievement for surfers and ocean/coastal conservationists, as 16 miles of coastline will be protected underneath this classification. That said, while this feels like a moment to celebrate, my concern lies deeper in to what the designation of a World Surfing Reserve in the Gold Coast means.  Is this a wave of progress? 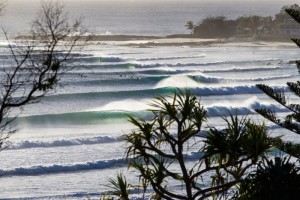 The Super Bank, long respected by surfers, will now be recognized as the 8th World Surfing Reserve. Photo: Sean Scott

What do the stewards of the World Surfing Reserves – Save the Waves Coalition, a non-profit organization – have to say? To begin, their mission statement reads:

A positive start, and important to to recognize that a plan appears to be in place regarding more than just designation (i.e. identification + preservation). Moving on, it does appear that certain environmental characteristics are recognized in the selection process of a reserve, most notably: a recognized biodiversity hotspot, threatened species present, and provides key ecosystem services.

WSR eligible waves and surf zones are evaluated and chosen based on the following criteria. (Savethewaves.org, 2015).

However, it is important to note that this table was the most comprehensive mention of an environmental review. Beyond this, there was only one other insurance of protection upon being designated a World Surfing Reserve, and that is:  “after applying and being selected, each WSR location creates a Local Stewardship Council and site-specific Stewardship plan to implement and manage the reserve” (Savethewaves.org, 2015).

I referred to two key news articles released either yesterday (The Inertia, 2015) or today (Gold Coast Bulletin, 2015) for further insight in to what comes with this initial designation. According to The Interia, an online surf news site, the World Surfing Reserve allocation for the Gold Coast appears to be all positive; as a clear indicator of this, the article begins with: “World Surfing Reserves are good things” (The Inertia, 2015).  The key justification this article provides of these good things, is a quote from Queensland Environment Minister Dr. Steven Miles: “The decision would help preserve the world-renowned beaches and the surrounding environment.” Moving on, the article from the Gold Coast Bulletin had lots of similar things to say, except: “despite council conditions making the reserve purely ceremonial, the Premier said the decision would help preserve the city’s world-renowned beaches and surrounding environment” (Gold Coast Bulletin, 2015).

So, what does this mean for Ocean + Coastal Conservation along the 16 kilometers of coastline along the Gold Coast? In one sense, optimism, recognition of the value of this area, and a group of international and local stewards paying special attention to conserving + protecting this designated area.  In another, a ‘purely ceremonial’ recognition containing no secured change in local, provincial or federal environmental laws.  While this is a great tool for recognition and a provision of improved support and pressure to protect these areas, the title ‘World Surfing Reserve’ appears to be a bit misleading.

In the end: Celebrate! – celebrate the milestone of recognition and support that has occurred for the Gold Coast, but, also recognize that the designation does not correlate to clear changes in legal protection with plenty of work still to be done.