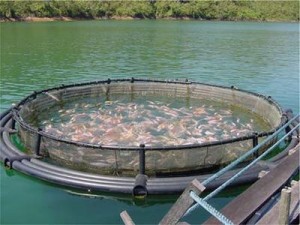 Many proponents of aquaculture (the farming of aquatic organisms such as fish, crustaceans, mollusks and aquatic plants) have argued that the methods are sustainable. While this may be true, current farming practices, particularly salmon, which generally call for open net-cages floating in the ocean, pose serious threats to wild salmon populations, other marine species, and the marine environment.

One of the biggest issues regarding salmon farming in BC is the fact that farms use Atlantic salmon rather than Pacific salmon. The reasoning behind this being that Atlantic salmon are milder in taste which makes it more palatable for a larger audience. Doing so introduces an invasive species into our oceans and pose serious threats to biodiversity. Because the net-cages used for farming ‘Atlantic salmon’ float in the open ocean, storms and predators can tear apart the cages causing huge amounts of farmed fish to escape. In addition, inadvertent release during transport, predation by marine mammals, and accidents are also ways escapes occur. Over 1 million Atlantic salmon have already escaped into BC waters, raising concern about the transfer of disease and their effects on habitat, and competition for resources such as food and space.

When initially found in BC waters, industry and government stated that Atlantic salmon could not survive in our habitat as support for why current farming practices are acceptable. DNA tests, however, have since confirmed that escaped Atlantic salmon are reproducing and that their offspring are thriving. Even on the east coast in the Atlantic salmons’ natural habitat, there are still risks associated with having farmed fish escaping into open waters; one of the main being farmed Atlantic salmon breeding with wild stock weakens the genetics of existing wild-type salmon since farmed salmon have a much shorter lifespan.

A large misconception with regards to farmed salmon is the notion that it creates more fish to feed the world. While certain forms of aquaculture are currently sustainable, salmon are carnivorous, and feed on other fish in order to grow. In order to raise these farmed salmon, large amounts of fish suitable for human consumption such as anchovies, sardines, and mackerel are turned into fish meal resulting in a net protein loss.

Solutions to the issue of the farmed salmon escaping into open waters can be remedied by converting the industries of open-net cages to that of closed-containment systems, however the issue with regards to whether or not current methods of aquaculture are truly sustainable are brought into question. In order to truly achieve sustainability and help feed the world, fisheries need to shift from farming carnivorous fish that produce net protein losses to herbivores and shellfish that can also offer us ecosystem services (e.g. filter feeding).