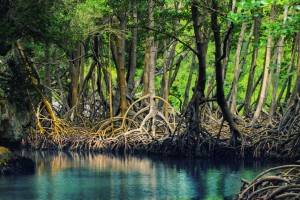 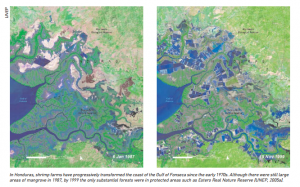 Far from sustainable, the majority of shrimp aquaculture operations experience production decline after only 4-10 years of operation (Bournazel et al., 2015). Shrimp ponds are often abandoned soon after this decline, leaving behind polluted spaces with drastically different soil composition and structure than the natural habitat they replaced (Bournazel et al., 2015). The intensive shrimp aquaculture of today is damaging to local ecosystems, and results in inequitable use of natural resources.  It is fair to say that it is a practice that requires reassessment; however in this reassessment, it is vital to consider the livelihoods of the farmers. A model for transition away from intensive shrimp aquaculture requires an attractive income alternative.

Kenyan villagers in the coastal community of Kilifi have traditionally been fishers, but in recent years have seen great decline in local fisheries (Mbugua, 2015). James Kairu, a scientist at the Kenya Marine and Fisheries Institute, identified the loss of Kenya’s mangroves as a key reason that fish numbers had dropped in recent years, highlighting mangrove restoration as an important step in the recovery of fisheries off of the Kenyan coast (Mbugua, 2015). Understanding the important role that mangrove forests play as fish nurseries, the people of Kilifi decided try a combination of mangrove restoration and aquaculture to develop a sustainable source of income for its residents, rather than moving to unsustainable practices such as shrimp aquaculture (Mbugua, 2015).  Foreign aid has enabled the villagers to plant more than 15,000 mangrove trees, guard mangroves from illegal hunters, and create and maintain four tidal fish ponds (Mbugua, 2015). The ponds fill with crabs, prawns, and fish twice a day when the tide comes in, and leaves them behind when the tide goes out again (Mbugua, 2015). The villagers then collect the stock, and sell it as a form of income (Mbugua, 2015). To supplement this income, they also sell a minimum of 12,000 mangrove seedlings each year (Mbugua, 2015).

Kilifi seems to be a success story, providing a framework for a creative income alternative to unsustainable aquaculture. It is hard to say, however, whether this project could be replicated in areas not receiving foreign aid. Will this compete with the income that could have been generated from intensive shrimp aquaculture practices without being subsidized? If it results in the protection of mangrove forests, is a subsidy not such a bad idea? At the very least, this model deserves further exploration.

Wells, S., Ravilious, C., Corcoran, E. (2006). In the frontline: shoreline protection and other ecosystem services from mangroves and coral reefs. Retrieved from http://www.iucn.org/about/work/programmes/marine/marine_our_work/livelihoods/coastal_publications.cfm?1240/In-the-Front-Line-Shoreline-protection-and-other-ecosystem-services-from-mangroves-and-coral-reefs.