If you live in Canada or the U.S., you likely experienced some unusual weather last year. While the western portions of both nations experienced a much warmer and drier winter than usual, the eastern portions experienced a much colder, snowier winter (Moore 2015). These weather events were due to an increase in the amplitude of waves in the polar jet stream, causing an unusually persistent high pressure ridge to hover over the western portion of the continent and an unusually strong low pressure trough to the east (Moore 2015) 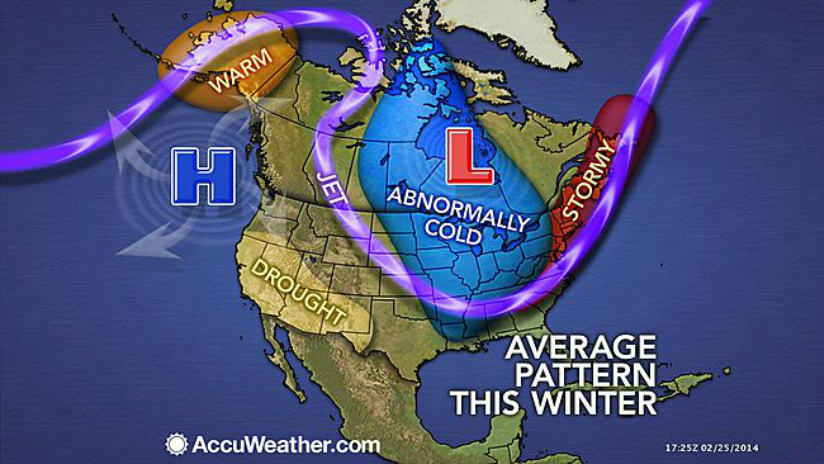 Average pattern of the jet stream in the winter of 2014 (AccuWeather.com)

Simultaneously, a strange anomaly in the sea surface temperature of the north eastern Pacific was detected in 2013 and observed to grow more pronounced throughout 2014 (Doughton 2015). Temperatures in this area have been consistently hovering over 2 degrees Celsius higher than normal, a phenomena that has not occurred at any point in the historical record of the north eastern Pacific (Bond 2015).  This large area of warm water has been dubbed “The Blob” by Washington state climatologist Nicholas Bond (Doughton 2015). The warmer sea surface temperatures have been linked to changes in the geographic ranges of certain marine species, leading to sightings of certain sea creatures in unusual places in the past year (Bond 2015). 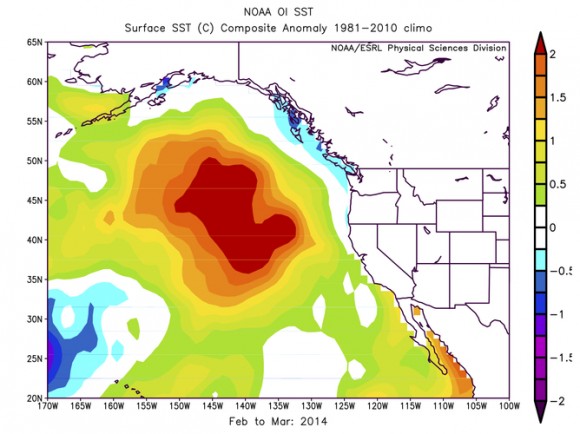 While it remains to be determined if these weather anomalies were caused by the blob or if the blob was a result of the unusual weather, it is largely agreed that they are associated (Doughton 2015). A prominent theory is that the high pressure area that has hovered over western North America due to the unusually wavy jet stream has been preventing the cooling of the Pacific that winter normally brings (Bond 2015). This suggests that the weather anomaly is in fact the cause of the blob. However, warmer sea surface temperatures in the Pacific are also linked to an intensification of the warm and dry conditions experienced in the West (Doughton 2015). 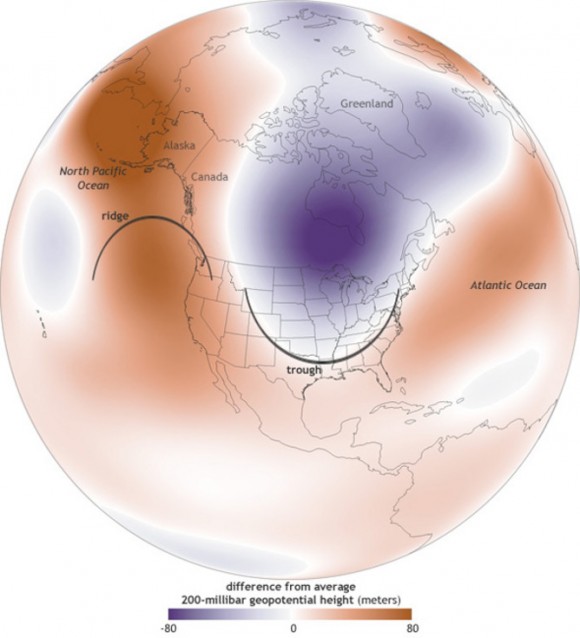 So while the blob may be producing some weird weather on its own, it seems likely that the jet stream is the “chicken” rather than the “egg”. But what has been affecting the jet stream? While one paper has recently asserted that the root lies in warming waters near New Guinea, many scientists have proposed that the rapid warming of the arctic has been altering the flow of the jet stream (Doughton 2015).

Personally, I think the warming of the Arctic is the more convincing argument to explain the appearance of the blob as recent abnormalities in the jet stream (which circumnavigates the arctic) have been observed all around the globe (Moore 2015). Whatever the cause, the blob is a reminder of the scale and severity of the changes that a warming planet will experience. Phenomena like the blob must be monitored closely to help us gain a better understanding of the changes to come. Such an understanding will help us predict and adapt to changing weather patterns and ideally help motivate change to mitigate humanity’s impact on the ocean and atmosphere.