If there’s one thing you would never expect to find hundreds or thousands of meters below the surface of the ocean, it’s a coral reef. Just 20 years ago, we knew almost nothing about deep sea coral, but with the advent of new underwater robots we are beginning to explore these mysterious worlds. What has been discovered is truly astonishing.

Like rainforests on land, these reefs are home to thousands of unique species found nowhere else on earth.

Deep sea coral live in a hostile world devoid of light and icy cold. Many are ghostly white with feathery branches, but their whimsical appearance hides a sinister secret. Unlike shallow water corals, these corals are carnivorous and consume anything that falls from the sunlit world above, dead or alive. The Threat of Trawling

With an astounding 80% of the ocean still unexplored, we can only imagine the weird and wonderful reefs yet to be discovered. Despite this exciting possibility, there is a distressing reality.

Many deep sea reefs will be destroyed before we ever find them, if they are not already gone.

Bottom-trawling fishing boats act as unintentional reef bulldozers. Their huge, heavy nets drag along the seafloor destroying everything in their path. Fragile deep sea coral reefs, up to 40,000 years old, are ripped from the seafloor and reduced to rubble in a matter of seconds. And it’s a widespread problem. In a 2018 study, scientists found that around the globe over a million square kilometers, roughly 14% of the seafloor had already been trawled. 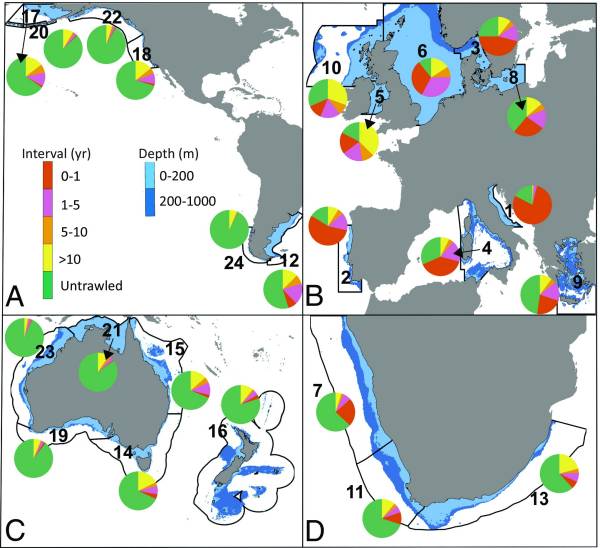 Deep sea corals are one of the slowest growing animals, and may only grow a single millimeter a year, meaning that what can be destroyed in a day will take hundreds to thousands of years to recover, if ever.

Coral reefs in the La Fonera Canyon in the Mediterranean sea. Photo from NOAA

While scientists have been clamoring for years to increase protection of these habitats, fishing industries have been resistant, leading to stagnating progress and heightening tensions.

A Glimmer of Hope

Despite this distressing situation, a remarkable story is unfolding in the northwest U.S. New regulations, effective January 1st, close 350,000 square kilometers to trawling in order to protect deep sea coral reefs. This groundbreaking regulation is the result of unprecedented collaboration between scientists and fishermen.

Trawling began in a big way in the region in the 1980s. Within 20 years groundfish became so overfished that catch had fallen by 75%. This initiated conversations between trawlers and conservationists who have been successfully working together to rehabilitate the stocks.

The new regulation is the result of more than 30 meetings during which the groups have slowly built trust. Trawlers allowed scientists access to proprietary routes and made some tough compromises. Conservationists compromised too. Part of the new regulations re-opens an area of close to 8,000 square kilometers where trawlers can continue operating.

Lessons for the Future

Collaborations such as this between conservationists and fishermen are vital. With the huge economic importance of fishing to coastal communities, conservation efforts can’t overlook the economic and social concerns of fishermen. Only through collaboration, education and compromise can we ensure a future that benefits us all.

NOAA (2018, July 7th). How much of the Ocean have we explored? Retrieved from https://oceanservice.noaa.gov/facts/exploration.html