Vietnamerica by author G.B. Tran, is a personal narrative in the form of a graphic novel that follows Tran, a second generation American from Vietnam, as he decides to delve into the history of Vietnam after he visits the country for the first time to attend his grandparents funeral, and realizes how little he knows about his family’s history. Throughout the text Tran goes back three generations to outline the conflict and war that has ravaged Vietnam, and Tran seeks to communicate what he learns about his families past, and moreover the events that led his parents to seek refugee status and immigrate to America. He coveys this history through fragmented non-linear events from different perspectives of his relatives. 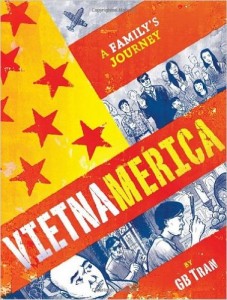 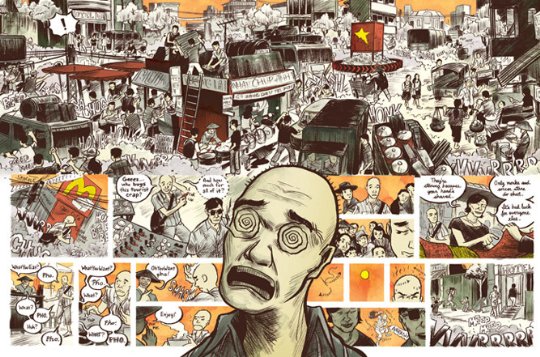 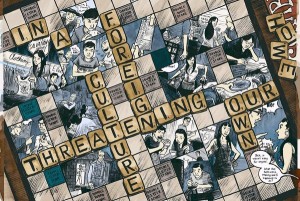 From these images you can see that impeccable imagery and detail were used to create this novel and it covers a wide range of historical content in which is intended at an older audience due to the violence and specific traumatic events faced by Tran’s family.

Caroline Kyungah Hong writes much about the use of graphic imagery by Asian Americans in, “Disorienting the Vietnam War: GB Tran’s Vietnamerica as Transnational and Transhistorical Graphic Memoir.” Hong exclaims the effectiveness of using graphic imagery for educational purposes and the way that they can convey verbal and non-verbal representations of political and historical events. She also commemorates Tran’s contemporary use of medium in abolishing stigma as it translates, through images, true events and brings up an idea of “realism,” as seeing images of the events can facilitate a reader’s connection the the actuality of the story. She also thoroughly describes his use of detail and colouring, in which are very effective in differentiating time frames and perspectives, as the book is spread over various different times. If you would like a more detailed synopsis of “Vietnamerican,” as well as an astute analyses,  I recommend taking a look at Hong’s article linked above.

Despite all of the praises of G.B. Tran’s novel, it has even won an Eisner Award (like comic version of an Oscar), I wanted to change my focus here, and look more into the use of comics as a narrative and how as a medium it can also be, conceivably, ineffective as autobiography.  I’ve focused on “Vietnamerica,” because despite all of it’s prestige, I also found in many reviews (found here and here), that the fragmented memoir is very hard to follow due to the ever changing imagery that is outlines all of Vietnam’s geopolitical shifts. Although I have not personally attempted this read as of yet, through these reviews I can think about the weaknesses in comic memoirs. Although they are great for orchestrating voices and histories, specifically of those in historical Trauma (e.g Maus, Persepolis, etc.), perhaps a downfall may be the busyness of graphic novels. By this I mean that the manner in which “Vietnamerican” is done, which is with an extraordinary amount of detail; and that detail combined with so much information can be too “busy,” and in turn create a sensory overload and distract a reader that is trying to follow the history.

Stop me if I’m reaching too far here, however this is my impression from many of the reviews.

One other point that has faced Tran’s novel, is the validity of his work. A review in The New York Times, talks about Tran’s accounts being channeled through himself from others, and onto the page as a “reminicence” – but the point is that these are not his own, and that it is this that begs the question; How viable is his work? This question is out there because he can’t convey narratives as he could with his own memories, nor can he properly convey the imagery of events that he did not witness. These claims all being made by reviewer, David L. Ulin, as I still don’t believe that I have enough knowledge of this book to coherently form objective opinions on the matter.

I would also just like to mention that despite these reviews and accusations, I am sure that “Vietnamerica” does hold up to it’s good reputation, and from what I have discovered thus far, it seems like a fantastic read. 🙂

So there you have it, I delved somewhat into some ideas around Tran’s book and it’s effectivness/work as a graphic medium. I know that I personally still have many questions, and hopefully I can at some point have to opportunity to read this narrative myself and properly understand it for it’s works and it’s contents.