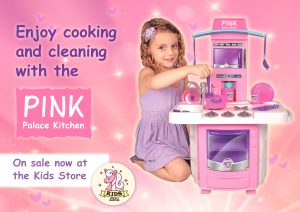 The picture is taken from

In this assignment, I will speculate the gender stereotype promoting by this image from its colour and used figure. This advertisement is trying to sell the kids’ imitative kitchen to consumers. When I first saw the advertisement, I noticed that the company is trying to sell their products with the strongly expressed gender stereotype. If we retrospect to the times when women were supposed to cook and raise their child where men were supposed to go out and earn money, we could feel that kitchen and cooking has always been associated with women, and cooking has become a gender-stereotyped behaviour for women. From where I come from, the majority of people think that to become a good wife, a woman has to know how to cook good food, and the woman has to be good at doing chores and taking care of everything.  However, in the civilized society where women and men have equal rights to pursue what they want, it is disrespectful for a company to use gender-stereotypical images to attract the corresponding consumers. Sometimes kid girls will be attracted by the colours and used figures spontaneously, instead of the real content of the product.

From the colour domain, it is noted that the whole advertisement is comprised of mainly pink, purple and some shiny elements. The colours used are trying to attract kid girls while the imitative kitchen is paired with the colours. From my perspective, the product is encouraging girls to preserve the gender-stereotypical behaviour into girls’ own hobby. On the other hand, the little girl on the advertisement is a stronger indicator of gender stereotype as well. It is expressing that the product is supposed to be used by girls, which emphasizes the encouragement. 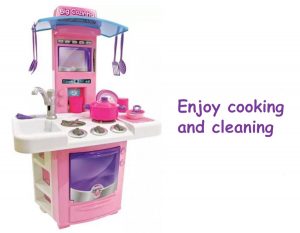 In the redesigned version of the advertisement, I took the girl image and the colour off, and I a more neutral colour as its background. The girl image indicating the potential gender of the consumers emphasized the gender-stereotypical information. In this situation, boys who like to cook can also choose the product without being afraid of teasing by their peers. Because sometimes boy also hide their “feminine” hobbies from their peers due to peer pressure, while their peers might bully them due to their “feminine” hobbies. I’m trying to cut the connection between cooking and feminine behaviour in the image using relatively neutral colour without gender indicator, because advertisements also have enormous implications to the public and children. Advertisement is posted not only on TVs, but also on public dashboards and internets. The content expressed in advertisements can affect children in a subtle way. Companies publish advertisements containing gender-stereotypical information, then the advertisements starts to influence children on a daily basis. I hope that the colour of the imitative kitchen can be in different colours as well, because it gives children more choice while expresses no encouragement of the gender – stereotypical information. It is noted that people affected by social norms believe that pink is a colour for girls only. When the colour is presented along with a girl image, the social norms become gender stereotype. Sometimes, boys are also restrained from playing with pink toys by their parents. This advertisement is following what social norms reckon, which plays a vital role promoting the social norms. Kitchen and pink are not supposed to associated together as an promotion of the product.