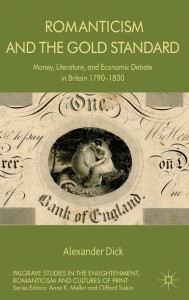 Romanticism and the Gold Standard: Money, Literature, and Economic Debate in Britain 1790-1830. Palgrave Studies in Enlightenment, Romanticism, and the Cultures of Print. Ed. Clifford Siskin and Anne Mellor. Houndsmills: Palgrave, 2013.

In 1816, the British government did something no one had ever done before: it introduced the first official gold standard in history. Through a close analysis of the pamphlets, reviews, lectures, journalism, editorials, poems, and novels surrounding the gold standard, this book examines its significance to the culture and literature of Romantic-era Britain.  The gold standard was not a material object or universal concept, but a self-reflexive discourse that raised fundamental questions about knowledge, value, and social life. While politicians and financial experts believed that gold was the key to the nation’s economic confidence, writers such as Ricardo, Malthus, Coleridge, Shelley, Austen, and Scott transformed the debates on the standard into a new disposition reflecting the difficulties and ambivalence    of modern commerce: embarrassment.

Nominated for the MLA First book award and for the British Association of Romantic Studies (BARS) First Book Award; reviews (to date) in Keats-Shelley Journal, Review of English Studies, Nineteenth-Century Literature, British Association of Romantic Studies Reviews, The British Society for Literature and Science, and The Year’s Work in Critical and Cultural Theory. 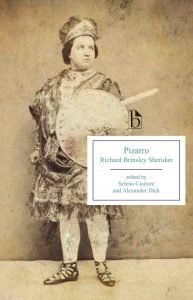 Richard Brinsley Sheridan’s last play, an adaptation of August von Kotzebue’s Die Spanier in Peru first performed in 1799, was one of the most popular of the entire century. Set during the Spanish Conquest of Peru, Pizarro dramatizes English fears of invasion by Revolutionary France, but it is also surprisingly and critically engaged with Britain’s colonial exploits abroad. Pizarro is a play of firsts: the first use of music alongside action, the first collapsing set, the first production to inspire such celebratory ephemera as cartoons, portraits, postcards, even porcelain collector plates. Pizarro marks the end of eighteenth-century drama and the birth of a new theatrical culture.

This edition features a comprehensive introduction and extensive appendices documenting the play’s first successful performances and global influence. It will appeal to students and scholars of Romantic literature, theatre history, post-colonialism, and Indigenous studies.

“This exemplary edition of Sheridan’s spectacular melodrama demonstrates how the play made history in multiple ways—theatrically, technically, nationally, and imperially. The editors expertly bring together source materials and stage history to revivify the original context of the play, its production, and its reception.” —Joseph Roach, Sterling Professor of Theater, Yale University