I don’t know about you guys, but I find Freud really interesting. Maybe because I like some of his theories, or maybe because I over analyze things way too often so I guess we have something in common. Anyway, despite his obviously controversial theories, I think many of his ideas have merit. Hear me out; obviously I don’t think all of his theories are correct. I’m not a believer in the “Oedipus Complex” or his theory of “penis-envy” (which we didn’t really talk about but is basically the female parallel to “castration anxiety”), nor do I think those ideas would go over very well if he tried to propose them in this day and age. What I do admire about Freud is his way of thinking, especially in a society that was extremely repressed at the time. Rather than politely explaining away people’s problems, he looked at aspects of the human psyche that most people were afraid to look too closely at. While many of his theories are only loosely based on scientific facts and are arguably far too fixated on sexual desires, he tried to make sense of things that had previously gone without any explanation. Some of Freud’s theories I enjoy because they are grounded in some aspect of plausibility, while others I find are just plain entertaining. I think that humans have an innate desire to explain things that we don’t understand, which sometimes results in people jumping to unsubstantiated conclusions. While Freud’s conclusions are in no way ‘jumped to’ – he makes many somewhat far-fetched connections between certain things in order to reach his conclusions – there is no way to confirm or deny for sure that they are truly the reasons for the behaviours in question.

I think what Freud was trying to do with his whole concept of psychoanalysis was to help people better understand themselves, whether it be as a way to alleviate ‘hysteria’ or to understand their own unconscious behaviours as a way to be happier in the future. As we discovered with Oedipus, knowing about yourself doesn’t always make you happier, but it can definitely allow you to change your behaviours in a positive way (or scratch out your eyes, whichever feels right).

What I’m trying to say is that while Freud’s theories are extremely difficult to prove and are in many ways controversial, we shouldn’t necessarily discredit them completely. Someone in seminar mentioned that it would be interesting to see what Freud would think about himself if he applied his theories to his own behaviours, and I definitely agree. What if his need to uncover unconscious desires is rooted in a childhood experience that he is repressing? 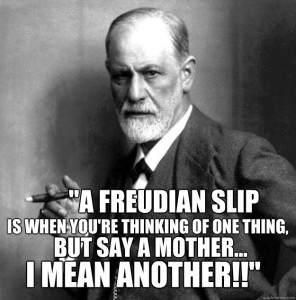 Either way I think Freud is super intriguing and still valid to discuss in a modern context, whether or not he was correct, seeing as he did contribute a lot to the development of psychology.