I found our discussion on mirrors in Hitchcock’s Vertigo last day in seminar very interesting, but I felt a bit of deja vu for some reason and I couldn’t figure out why. In particular, the scene in Judy’s hotel room: 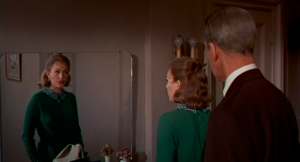 In lecture, it was described as the true Judy being split into two parts by Scottie’s gaze – the “independent, common yet rational Judy” is the real Judy, standing in fron of the mirror. She isn’t what Scottie wants, but the “helpless, aristocratic unstable Madeleine [is], whose possibility reappears in the mirror”. It is at this moment in the film, after looking at herself in the mirror, that Judy begins to give in to Scottie – after perhaps seeing herself as he sees her. After thinking about the scene in that way I finally realised why i found it so familiar:

“I saw him watching me in the gilded mirrors with the assessing eye of a connoisseur inspecting horseflesh, or even of a housewife in the market, inspecting cuts on the slab. I’d never seen, or else had never acknowledged, that regard of his before, the sheer carnal avarice of it; and it was strangely magnified by the monocle lodged in his left eye. When I saw him look at me with lust, I dropped my eyes but, in glancing away from him, I caught sight of myself in the mirror. And I saw myself, suddenly, as he saw me, my pale face, the way the muscles in my neck stuck out like thin wire. I saw how much that cruel necklace became me. And, for the first time in my innocent and confined life, I sensed in myself a potentiality for corruption that took my breath away.”

While the two scenarios aren’t necessarily the same, Vertigo’s plot being far more complex and the relationship in the bloody The Bloody Chamber far more problematic, there is a similar feeling to the situations. I feel like it was this type of situation that Angela Carter was trying to exaggerate in her stories in order for people to notice the potentially problematic things that often go over our heads.

*sidenote: Carter’s book was published in the late 70s and Mulvey’s article in the early 70s – I wonder if they ever discussed this, I feel like they would have gotten along.