This post may look to be boring. Election systems, you ask? How can those be at all fun? Well, dear reader, you are wrong. This is going to be the most epic post of your life and you are about to get SCHOOLED in so much politics that you will be able to impress your entire family next year at Christmas when they question what good a Canadian Studies/Art History/English degree will get you in life. Ahem.

AMS Council decided a few years ago to hold elections via Condorcet voting, instead of First Past the Post (FPTP- like how you vote in a government election). Due to UBC fucking over the AMS by underestimating how long it would take to implement a new elections system, AMS Council had this huge debate over FPTP vs Condorcet last night. UPDATE: Someone saved the day and now we’re now using Condorcet after all!

Below are our interpretations of the two systems and how it would work out in real life/pop culture land using Twilight and Glee. Yes, we fucking just did that.

The love triangle is abundant in pop culture, even if its usually culminated with the exact wrong couple getting together. Take Twilight for example. Team Jacob or Team Edward has divided giggly tweens around the world, and this is a perfect example of when first the past is a good system.

For some reason that we can’t quite understand, Bella is keen on Edward (ok, yes, the vampire sex scene in Breaking Dawn was quite amazing), the no-fun vampire who wants to get married and then isolate Bella from everyone she knows.

We think that Bella would have a lot more fun, and well, actually be ALIVE, if she was with Jacob. Plus, he’s hot. Like, super hot. Who would want to cuddle with an icecube when you can cuddle with a hot water bottle? Yeah, we thought so too.

So whether you’re Team Edward or Team Jacob, if the AMS Elections had a ballot asking you who Bella should choose, first past the post is fine. There’s only two choices, and whoever gets the most votes wins. This is like the race for VP Finance, although the candidates look too similar for us to deem one Jacob and the other Edward. It is also like the race for BoG (pick two) and Senate (pick five). Obviously, Sean Heisler is Jacob in this scenario (has anyone else noticed how buff he is?). [Editor’s Note: Sean Heisler got Chris Eaton from Enrolment Services on the phone in AMS Council at 10:30 AT NIGHT so he could talk to the EA about the elections system. For this, we deem him this year’s first Dreamboat. Re-elect him, he obviously uses his connections well. See below.]

Condorcet Method aka Rachel vs Jesse, Puck, and Finn:

The pop culture love rectangle is more of a complicated scenario, in which a girl who thinks she isn’t all that pretty (yet totally goes all wannabe-third wave feminist with Terry Richardson) has an endless supply of adorable men at her disposal. Unlike Edward and Jacob, fans are not as maniac (read: partisan) about who they prefer and learn to adapt to like the new love interest. And when they’re gone, well, you’re left with distant fond memories of a love that wasn’t really lost.

i'm a jesse man myself, and this moment in "hello" is possibly my favourite glee moment ever.

FPTP brings about more partisan candidates, while preferential balloting yields more centrist candidates. In Condorcet, you get to rank the candidates in order. Whoever is found to be the most likable candidate will win, and this is why joke candidates like Aaron Palm can beat Tim Chu. The candidate chosen is usually the one most people won’t complain about. If people are voting on issues (and since we don’t have slates, they are basically voting on issues), the candidate who has the more palatable stance will be favoured with Condorcet. For example, think of Puckleberry, Fichel, and St. Berry (really? REALLY?)

this was taken from a real fan forum. who says we don't do research? 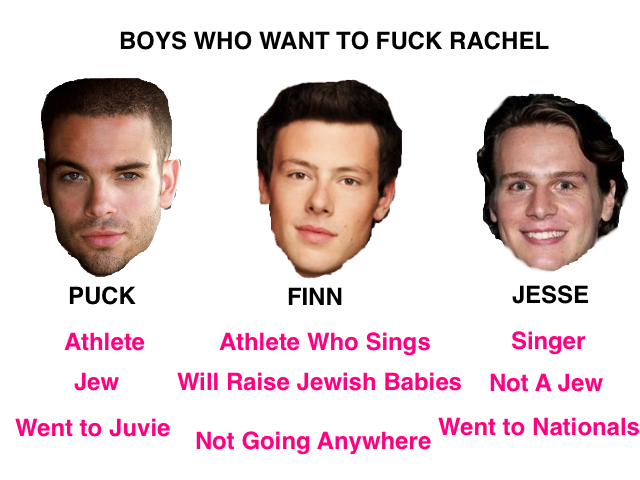 For some voters, they may think that Rachel really really really needs to be with someone as talented as herself and would vote like this:

While others may think that anyone with a great talent will outshine her. They’d vote like this:

Another issue could be their religion. Some voters may think that Rachel really needs to mate with a Jew, and would prefer Puck. However, Finn has said he will raise Jewish babies and they’d rather see that than nothing:

Regarding stability, voters may just want to make sure someone stays on the show long enough to love her:

And it goes on, and on. The extreme Puck lovers will vote for Puck and the extreme Jesse lovers will vote for Jesse and the normal Finn lovers will vote for Finn. But, let’s say that there are more Jews on campus who would prefer Rachel have Jewish babies.  In a FPTP system, let’s say the result was 43% for Puck vs 40% for Finn vs 17% for Jesse. Puck could win with the most votes, even though if you added Finn and Jesse’s number together, more people voted to NOT have Puck than those who did. FPTP doesn’t mean you need a MAJORITY of votes (51%) it just means you need the MOST votes (which in this case is 43%).So while Puck may win with FPTP, most students wouldn’t be happy with this decision, because 57% of them voted for Not Puck.

Using Condorcet, students are allowed to rank who they want Rachel to be with, and more students are happier. Looking at the issues and how they voted, Finn was a consistent second choice with both Puck and Jesse lovers. At the end of the day, we can all just agree that Finn is the best option because he can both sing and play sports, doesn’t outshine Rachel, will raise Jewish babies, and isn’t going to leave her.

This is like the VP External race. The Knollies will vote for Rory, the Greeks will vote for Katherine, and the Hacks will vote for Mitch. The winner will probably be Katherine or Mitch. They are both very similar and have a lot of experience, so it’s hard to differentiate between them. The second place votes from the Knollies, Frats, and other random students will probably seal the deal as to who wins this race. (UBC Insiders did a council poll and actually found there to be different results using Condorcet vs FPTP in only this race, watch for their post coming up). The VP Academic race is the same. Matt will get the Greeks, Jennifer will get the Knollies, and Justin will get everybody else. The winner will probably be determined by whoever gets the most second place votes.

8 thoughts on “WTF is Condorcet?”