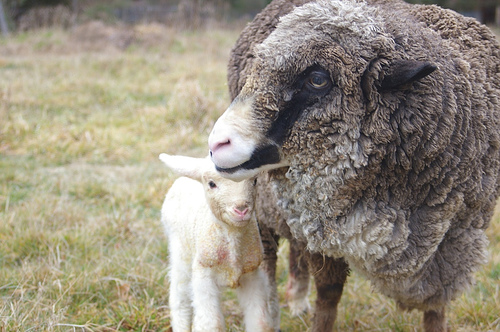 On the side of the Wool Producers…

Australia is the largest producer of wool in the world and it’s their second largest agricultural export (behind beef).4 There’s 92.7 million sheep in Australia and 88% of those sheep are purebred Merino and 9% are Merino-crosses.4 The value of wool exported from Australia in 2006/2007 was $3.07 billion AUD.4 The wool industry is a huge part of the Australian economy.

Most of the criticism behind the Australian wool industry is centred around the practice of mulesing, but also includes tail-docking and shearing. The RSPCA and the Code of Practice gives wool producers a set of guidelines regarding how to safely and effectively mules the lambs, tail-dock the lambs and how to shear the sheep.² Wool producers do not want to cause their animals any pain, suffering or injury as injured or stressed sheep don’t produce as much wool – and that’s what they’re in the business of doing.

And those against them…

The main opponent has been the People for the Ethical Treatment of Animals (PETA) who ran a campaign in 2004 called Save the Sheep. The Save the Sheep campaign had graphic images of bleeding sheep and claimed that mulesing causes “unnecessary pain and suffering” to the animals.³

What PETA did not mention is that Merino and Merino-crosses are predisposed to being more likely to be afflicted to flystrike due to their excessive skin wrinkles which makes it difficult for the wool in the breech (buttocks) around to stay clean.³ But PETA went ahead and pressured international clothing retailers to boycott the use of Australian wool in order to put pressure on wool producers to stop the mulesing practice.³ The initial promise was to phase out mulesing by 2010, provided that there was a reasonable, cost-effective alternative to mulesing.³

Mulesing has still not been phased out in Australia and it is still considered the most effective method of reducing flystrike in sheep. Without the use of mulesing, it is estimated that 38 million sheep would suffer each year from flystrike and that 1 million sheep would die each year.³ The RSPCA agrees with the use of mulesing in areas that are known to have high rates of blowflies and that to not mules the animal would be wrong.²

PETA appealed to the emotional aspect of people by showing them images of bleeding lambs. But they did neglect to talk about why mulesing is done in the first place and why the practice has been effective. By calling for an end to mulesing, more pain and much longer suffering would be endured by the sheep due to flystrike. It is expensive to deal with flystrike – cost of treatment, loss of wool for economic purposes and loss of the sheep’s life. PETA only called for an end to mulesing without offering a solution that could be used in its place to work as a preventative measure for flystrike.

2 RSPCA Australia Knowledge Base. Aug. 2 2011. What is mulesing and what are the alternatives? Available at: http://kb.rspca.org.au/What-is-mulesing-and-what-are-the-alternatives_113.html Accessed March 20 2012.