The National Film Board of Canada has a collection of 39 films about the Aboriginal Peoples of Canada. The collection covers a wide range of topics such as the arts, government relations, spirituality, and urban life. 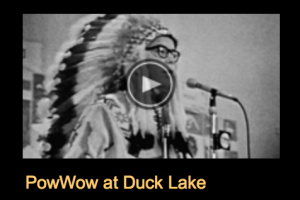 The short documentary film, PowWow at Duck Lake, covers a discussion at Duck Lake, Saskatchewan. Indian-Métis problems, such as education, and lack of opportunities for Native youth, are are discussed in a gathering of Native and white community members.

PowWow at Duck Lake by ONFB, National Film Board of Canada